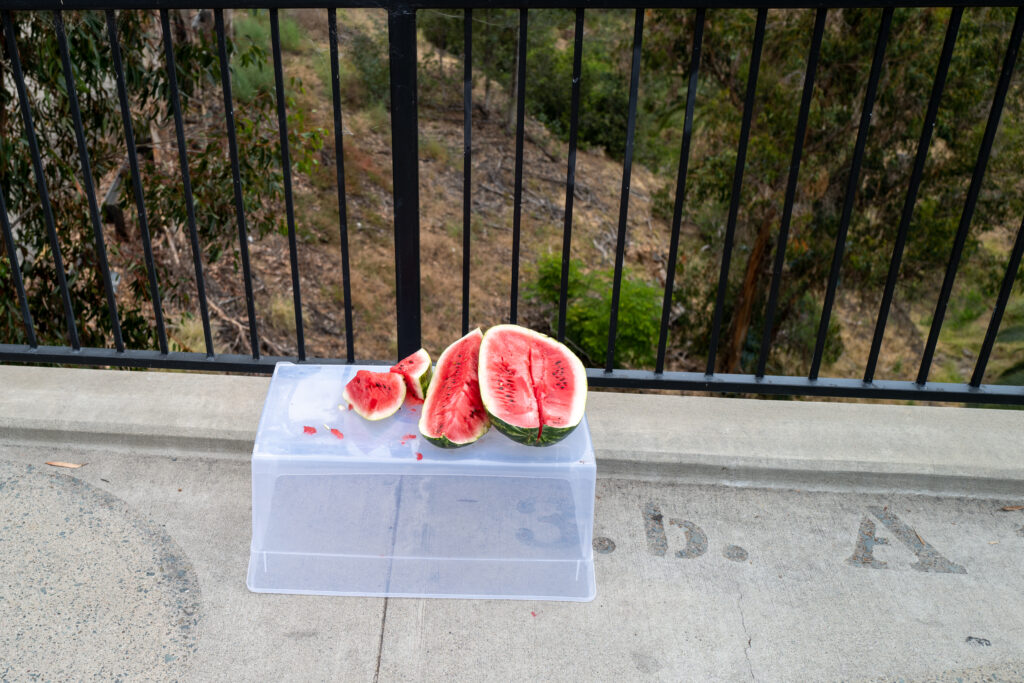 As I crossed the Vermont Street Bridge from San Diego’s University Heights neighborhood to Hillcrest today, something strange stopped my morning walk. Why was there cut-up watermelon? Was it left for someone—perhaps the homeless gent wrapped in a blanket, lying still, and (likely) sleeping on the sidewalk outside the structure’s entrance? Was it a flavorless, abandoned breakfast? The slices looked fairly fresh and no flies swarmed about. So free from wildlife and human attention, the makeshift meal could have been the final feast of the apocalypse.

Update, June 19, 2020: Call me clueless! This morning, I showed the photo to my wife, who scolded: “You do know that there’s a stereotype about black people eating watermelon?” That’s news to me. “I love watermelon, and I don’t understand why there’s some kind of negative stereotype about it”. She, and me, is hyper-aware, given three weeks of protests about racism in America.

Initially, I dismissed the assertion as a cultural urban legend. Then I searched online, using terms: “watermelon, black people”. Yikes! How right that woman was. For your edification, two stories:

Following Emancipation, many Southern African Americans grew and sold watermelons, and it became a symbol of their freedom. Many Southern whites reacted to this self-sufficiency by turning the fruit into a symbol of poverty. Watermelon came to symbolize a feast for the ‘unclean, lazy and child-like’. To shame black watermelon merchants, popular ads and ephemera, including postcards pictured African Americans stealing, fighting over, or sitting in streets eating watermelon. Watermelons being eaten hand to mouth without utensils made it impossible to consume without making a mess, therefore branded a public nuisance.

S-o-o-o, what I didn’t explain in the first version of this post: The man sleeping under cover, not 15 meters (50 feet) from the watermelon, was black. I saw him walking with the same blanket a few hours later. The question, restated in context: “Why watermelon?”

I used Leica Q2 to capture the Featured Image. Vitals, aperture manually set: f/4, ISO 100, 1/320 sec, 28mm; 9:27 a.m. PDT. I considered close-cropping but chose instead to keep the canyon foliage visible beyond and below.