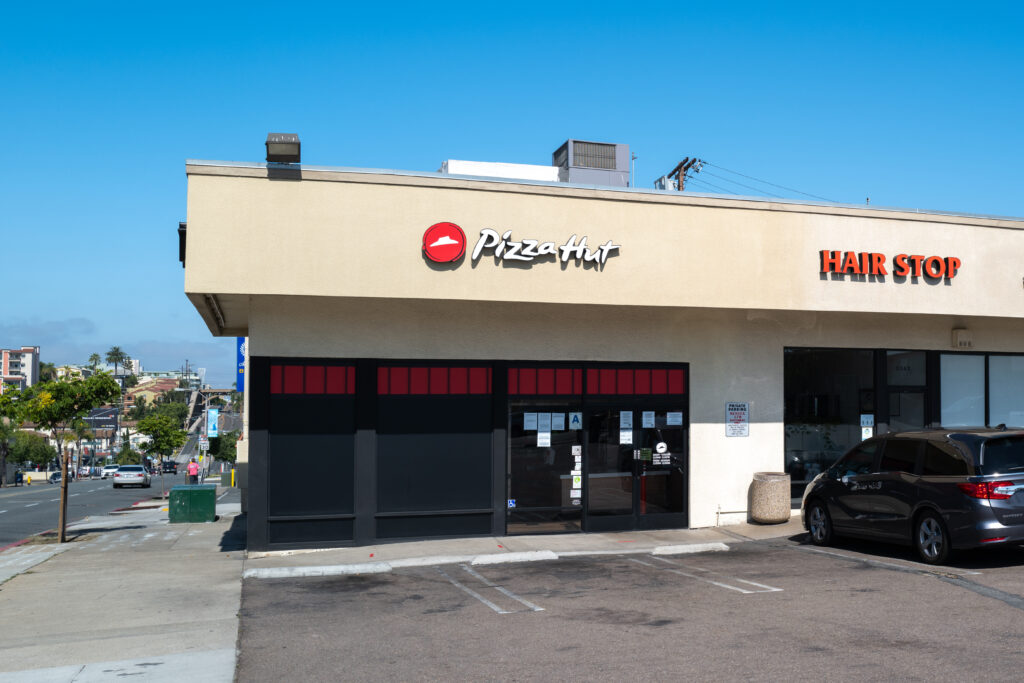 Last night, as I pulled into Pizza Hut’s parking lot, a lady driving a SUV blocked my way. While plenty of spaces were available, she chose to wait for one right in front of the store. There, a most ramshackle man lean-lifted a walker—one without wheels—slowly advancing between the painted lines towards the sidewalk. He was so weather-worn and browned from the San Diego sun, his race wasn’t identifiable. There are people who panhandle and pretend to be homeless, but not this gent. He was beaten down and bent over,  pushing snail-like forward. He genuinely lived on the streets.

Eventually, he cleared past, and the lady parked, allowing me passage to do likewise. Because of the SARS-CoV-2 (severe acute respiratory syndrome Coronavirus 2)—also known as COVID-19—pandemic, the Hut only allows one customer to enter; others wait outside. By the time I advanced on the door, the chonky SUV driver had gone inside and a petite younger woman stood before me. While waiting, I observed two unexpected happenings.

Mr. Down on His Luck took position on the other side of the garbage can, which as you can see from the Featured Image is close by the restaurant’s doors. He leaned against the building and fiddled with a take-out soda cup—7-Eleven Slurpee-size—that had been in a small sack of belongings. Then he pulled down his pants, and I thought he was about to do some perv thing where the other customer could see. But he leaned forward, put the cup behind, and pooped. The stench was overwhelmingly strong; for some things, a face mask is no protection.

While he, pardon the frankness, crapped in the cup, a young man rounded the corner and spoke to the gal standing before me, reminding her to tell Pizza Hut management about the graffiti. Say what? I thought. They shared their grave concern about the writing’s contents. He reasoned someone could clean off the defacement with hose and water. She said that it had been spray-painted. I wondered what was there and where? On the side of the building?

Meanwhile, the street warrior finished his business, straightened, and leaned forward on the walker for a few paces before plunking down in front of the closed hair salon. My emotions were mixed disgust and concern. When first seeing the fellow, I had planned to offer him some money for food. But after he did his thing, outdoors, in public, I kept me away for fear of contamination. In January 2004, I got poison ivy after giving money to a homeless dude; so I’m extra cautious now.

A Hut employee showed more deference, and respect. In a low voice that I couldn’t hear, Mr. Down on His Luck asked something as the staffer walked past. “You want to order a pizza?” he replied, genuinely. I couldn’t hear the answer, and my turn came to enter the store. I can’t say what resulted from the interchange, if anything.

Driving home with my two pies, I wondered what would become of the feeble fighter, for I felt for him. Undoubtedly, Novel Coronavirus closings and new protection protocols limited toilets available to him. Had he been a stray animal—say, cat or dog—surely several North Park residents or passersby would have rallied assistance. But a sun-darkened, wrinkled, helpless homeless man generated no more attention than the garbage can beside where he relieved himself. The Hut employee not only responded but offered a smidgen of dignity. My experience: Fast-food places often shoo away street derelicts. His response was exceptional.

This morning, my wife and I walked over to the corner of Texas Street and University Avenue to see the graffiti. Along the sidewalk, someone had spray-painted profane, hate-accusations against several people claimed to belong to the KKK (Klu Klux Klan). The disgusting, defaming defacements included full names and addresses and encouraged harm against those folks identified. What the frak?

I used Leica Q2 to capture the photo, which is cropped to remove a license plate but to keep visible some of the graffiti, which is illegible from the distance; purposefully. Vitals, aperture manually chosen: f/8, ISO 100, 1/400 sec, 28mm; 9:47 a.m. PDT.