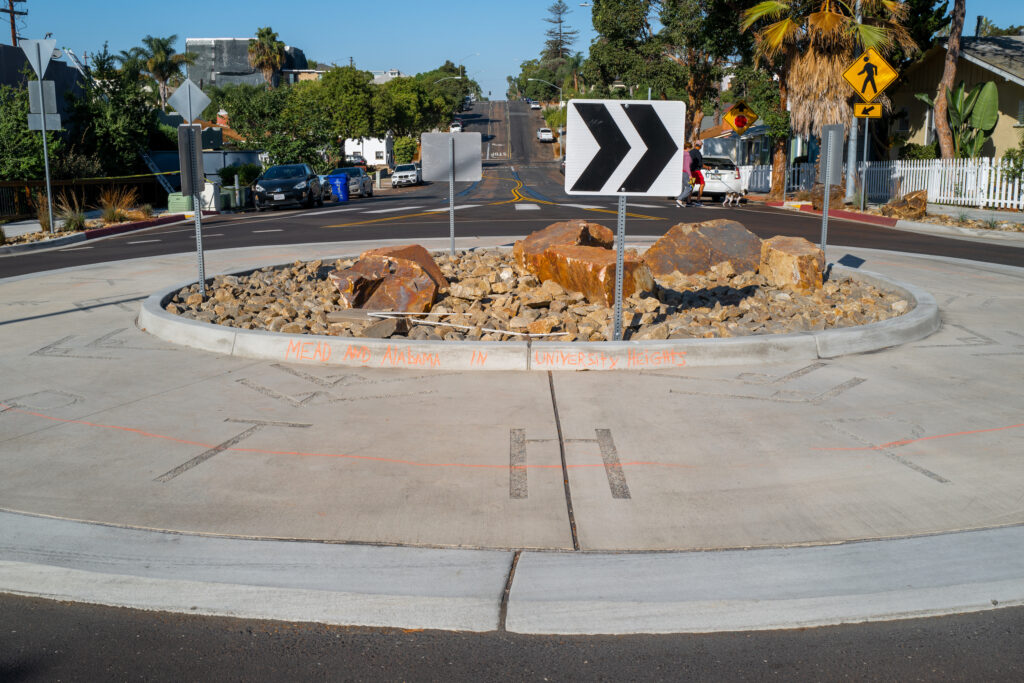 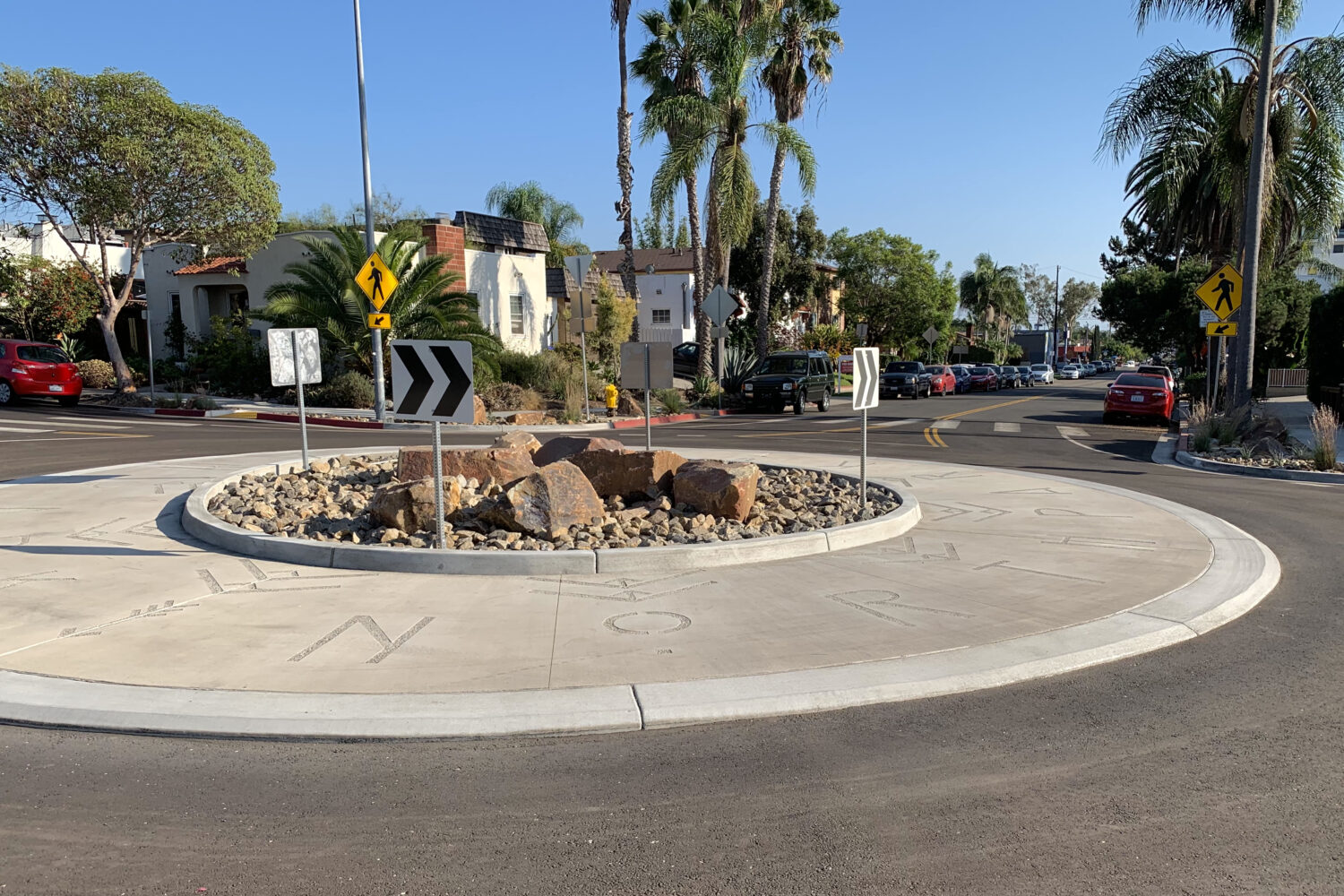 This morning, I walked past the Louisiana etching-in-progress and spoke with someone in the road crew. He said that I was the fifth person to come by and tell him that the traffic circle is located in University Heights. He indicated that, hours earlier, the information had been conveyed to a supervisor, who signed off on the work as planned. I asked if the error could be easily fixed. “No”, and he waved his arms. “They will have to tear the whole thing out”.

Caught up in busywork, I lost track of time and missed tonight’s monthly University Heights Community Association meeting, which coincidentally featured San Diego mayoral candidates Barbara Bry and Todd Gloria. I do hope that someone complained about the bureaucratic disaster that coopted our fine neighborhood into seedier North Park, which has undeserved reputation for being trendy—unless, of course, filthy streets and urban decay qualify. 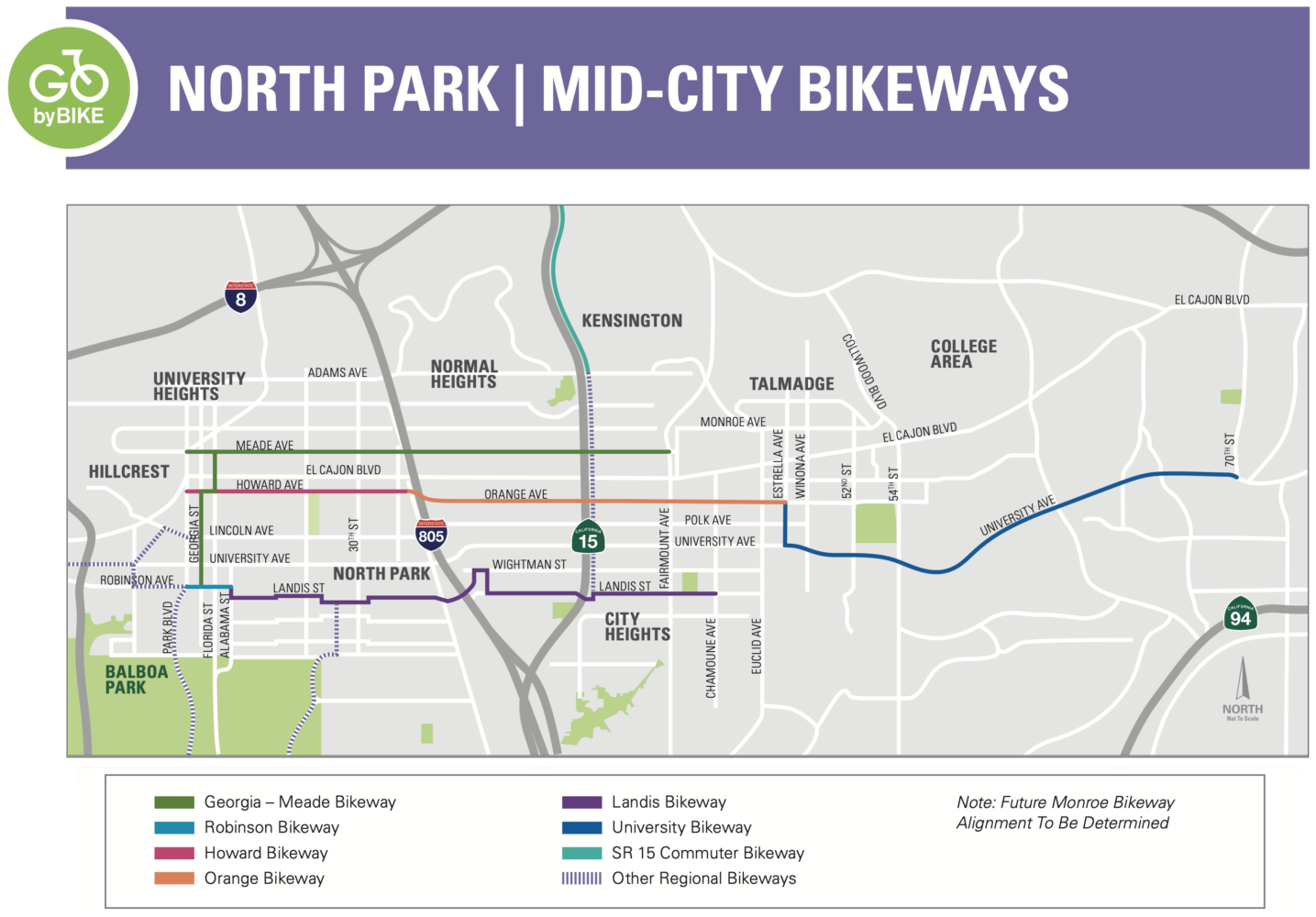 The so-called calming circles are part of the Meade Ave. bikeway, which according to the city’s own map (above) goes through UH, Normal Heights, and Kensington. Not North Park. Follow the green line.

Given how much that protests and riots have swept across the country, starting in late May, I half expect to walk down Meade someday soon and see a handful of aged, long-time residents blocking traffic with their walkers—upon which hang signs like “I don’t live in stinkin’ North Park!”; “Bring back the four-way!”; or “Ban the bikeway!”.

Speaking of protests, should rioting erupt during or following the Presidential election next month, as many people predict (me among them): The city has provided provocateurs with lethal weapons, in the form of decorative rocks placed in the middle of the street structure and along all four corners at each renovated intersection. Could that be even more lunatic than the sandblasted mis-naming? Yes!

So here we are—moved to North Park without going anywhere. Incursion. Subversion. Occupation. Subjugation. The invasion of University Heights has begun. And what’s the metaphor? Ask me after the election fiasco—assuming we folks here in UH survive rioters gathering and hurling rocks from those, ah, peaceful calming circles.