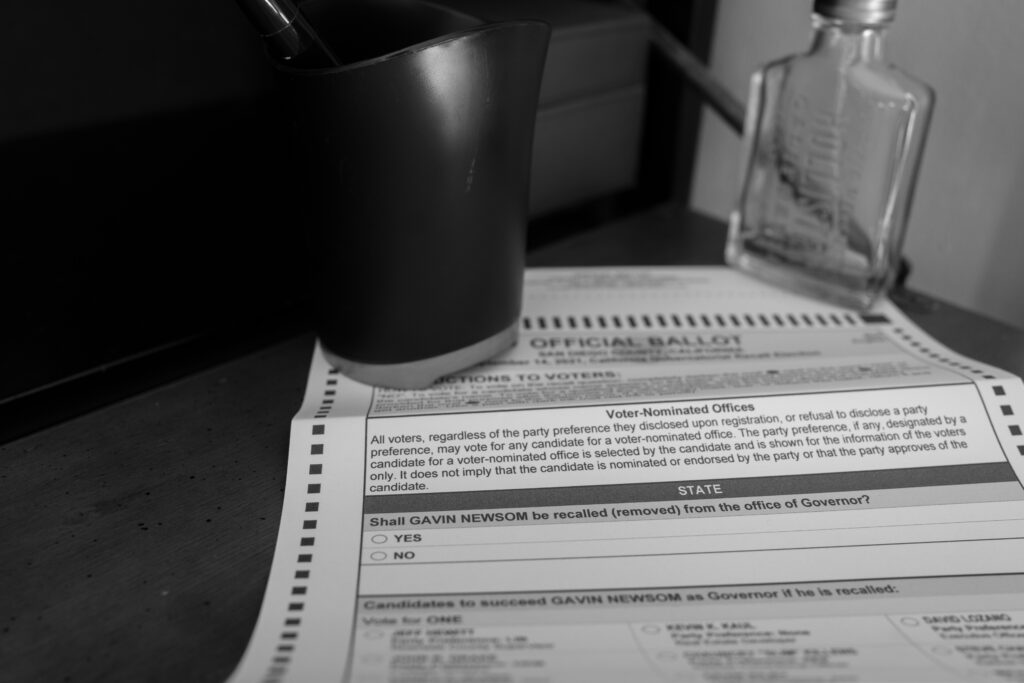 My wife and I dropped off our ballots at Garfield Elementary, which is located in San Diego’s North Park neighborhood. Crossing the parking lot, we saw three people, presumably all poll workers, sitting in folding chairs under an awning outside the school entrance. We had forgotten about masks, which the trio suddenly pulled out and put on before walking inside. Then a brave one came out to meet Annie and I, holding in outstretched arms a yellow canvas sack that blocked the woman from the two pariahs—meaning us. We dropped in our mail-in ballots, and she rushed away. Gosh, I sure hope that wasn’t the trash liner.

Californians are being asked whether or not they want to remove the governor. Unfortunately, opponents and proponents have framed the recall election in terms of Gavin Newsom vs front-runner Larry Elder, which distracts from the reason for everyone going to the polls. The special election is absolutely about Newsom vs Newsom, whether or not he should stay in office or be replaced. Nothing more matters. The answer is Yes or No.

Some 46 contenders vie for Newsom’s job. If the governor gets the preverbal boot, the winner—and that could be conservative broadcaster Elder—will do so with a relatively small percentage of the electorate’s support. I wonder if for future recalls a different outcome should be law: Lieutenant Governor ascends to the top spot.

Regardless, I see no good outcome ahead. If Newsom stays, he will be emboldened to resume the dictatorial manner that led to uprising against him. His SARS-CoV-2 (severe acute respiratory syndrome Coronavirus 2)/COVID-19 lockdowns and restrictions strangled commerce and small businesses, and—in the wake of the Delta variant—with arguably questionable public health benefits. Everyone is destined to be infected, whether or not they are vaccinated, because of Delta’s communicability.

If Newsom is out, and Elder is in, chaos will follow. The broadcaster: has zero political experience; promises to reverse numerous policies that many of the state’s predominantly Democratic citizens would oppose; stands to be ridiculed and undermined by liberal news outlets and social media companies; takes office during the tail end of the current gubernatorial term. I can’t  imagine why he, or anyone else, really wants to be character-assassinated by the Golden State’s unruly liberal mob.

Who are these 46 potential political sadomasochists?

Professions range from actors to entertainers to screenwriters to educators to realtors to small business owners to attorneys to politicians to students—and more.

Will any of them be our next governor? If 50-percent of voters pick Yes, for sure someone. While I don’t love Newsom, his leadership, or his policies, my guess is he will win the recall but lose legitimacy to run for reelection as California governor.

Should he lose and Elder win, Democrats had better figure out how to make “Weekend at Bernie’s” out of Senator Diane Feinstein. Because if the 88-year-old retires or (pardon me) croaks, Elder will replace her with a Republican—and the U.S. Senate flips. Now there’s some chaos worth watching with a bucket of buttered popcorn. No big screen drama could be as riveting a political saga.