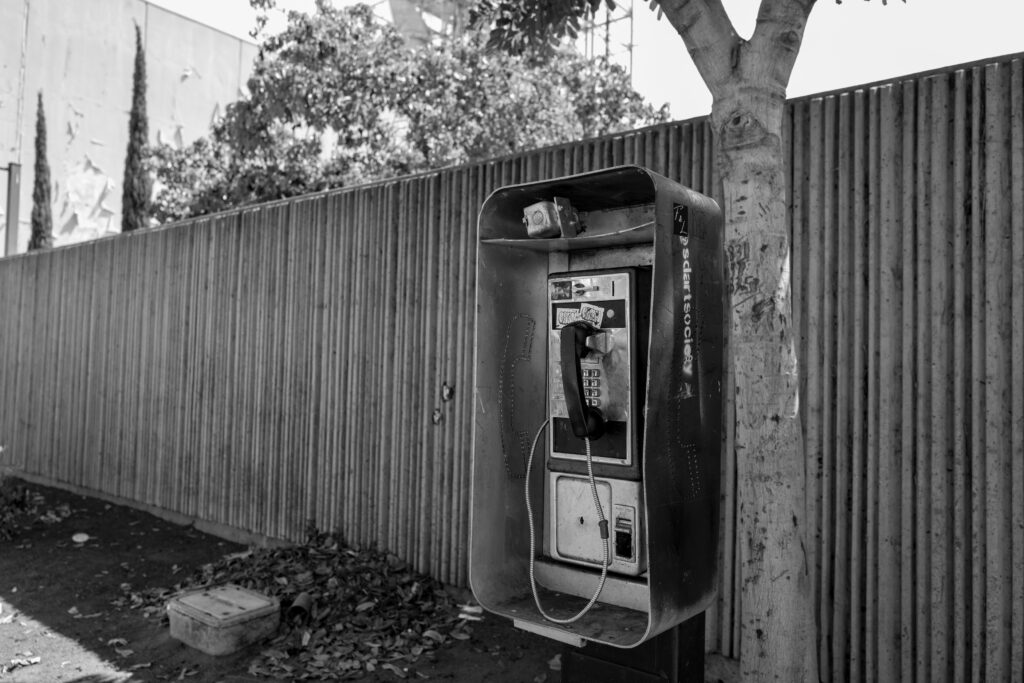 This payphone is one of many things out of place along University Avenue in downtown Hillcrest. At my request, today, Annie dropped me in the San Diego neighborhood when she went out on an errand. I walked home, for a change in scenery. Eh, what a change.

As I stood at the stoplight, waiting to cross Sixth Avenue, something tumbled end over end over University and landed in the gutter across the way. Then a skinny, shirtless, suntanned dude strutted across the street—haughty and boisterous. He picked up what looked like a metal pipe or handle and began twirling it combat-style. I pushed the walk button to cross University rather than Sixth.

While I waited to escape, he started a quarter-way into the street and stopped. He assumed challenging, menacing posture—brandishing his weapon at waiting cars. By the time the walk sign appeared for University, and I started to move, he stood in the middle of Sixth, unyielding to vehicles wanting to pass—motioning and talking at the drivers.

On the other side of University, where I once again waited to cross Sixth, someone several meters to my right propped against a building and made animal-like grunts and shrills. I crossed the avenue and came upon the payphone. I never see them anymore. Do you? Their rare appearances are often outside convenience stores. But this one stood near a street corner—like you would expect to see before the era when most everyone carries a smartphone. That said, in Hillcrest, today, I passed many homeless people—and plenty of them might not carry a mobile; the pubic land line could be their lifeline.

At the corner of Eighth, I came upon someone wearing too many layers for the warm weather—among them something like a dress dangling tassels. Given the clothing and purse flung over the shoulder, woman was fair guess—except for the scrawny, hairy legs.

As I pondered gender issues, just past Ninth and starting on the bridge that crosses highway 163, someone coming up behind gave me the queasies. When I heard him talking to himself—loudly and incoherently—my pace quickened and I passed by the person who had been in front of me. Not a woman! A man, with big, bushy black beard, matching mustache, and thick mop of hair. I couldn’t guess if the somewhat crazed look was his state of being or reaction to the person coming up behind us.

We both stopped at Tenth and University, and blabberer blasted by, taking deliberate strides. Like the pipe-wielder, he was skinny shirtless—but beneath a light blue suit jacket. Unabashed, he walked diagonally across both streets through the dangerous intersection. Approaching vehicles be damned.

Three minutes later, I finished with, ah, Hellcrest, briskly walking over the Vermont Street Bridge that leads to my home neighborhood of University Heights.

About this post’s title: You can’t call 911 if one of these seemingly mentally unstable people assault you, nor to seek assistance for them. Help isn’t coming.

Addendum: Next day, when California held the special election about recalling Governor Gavin Newsom, Tomasz Stramel commented to the version of this post that appears on Flickr: “This could well be a report from Zombieland! Such a depressing picture. About those phones: are they all out of order, abandoned by whatever company or city dept. was responsible for their maintenance? I’ve no dog in this fight, if you pardon me saying so, but if I lived there, I’d want to give Larry Elder a chance, even though he’s a political novice. I realize there’s only so much difference a governor can make, and it would take time before any decisions trickle down to every Hillcrest around the state, but how much worse can it get?”

Larry Elder was favorite to win, should voters reject Newsom. Next day, election decided, I responded: “As you might now know, our governor survived the recall; we’re stuck with him. That said, among the 46 possible replacements, Larry Elder commanded enormous lead: 47 percent. He may yet half a political future. Somewhere. Yes, this is a ‘report from Zombieland’. I am stunned by the differences between Hillcrest and University Heights, which are adjacent. On one side of the Vermont Street walking bridge is Mr. Roger’s Neighborhood; on the other is World War Z“.