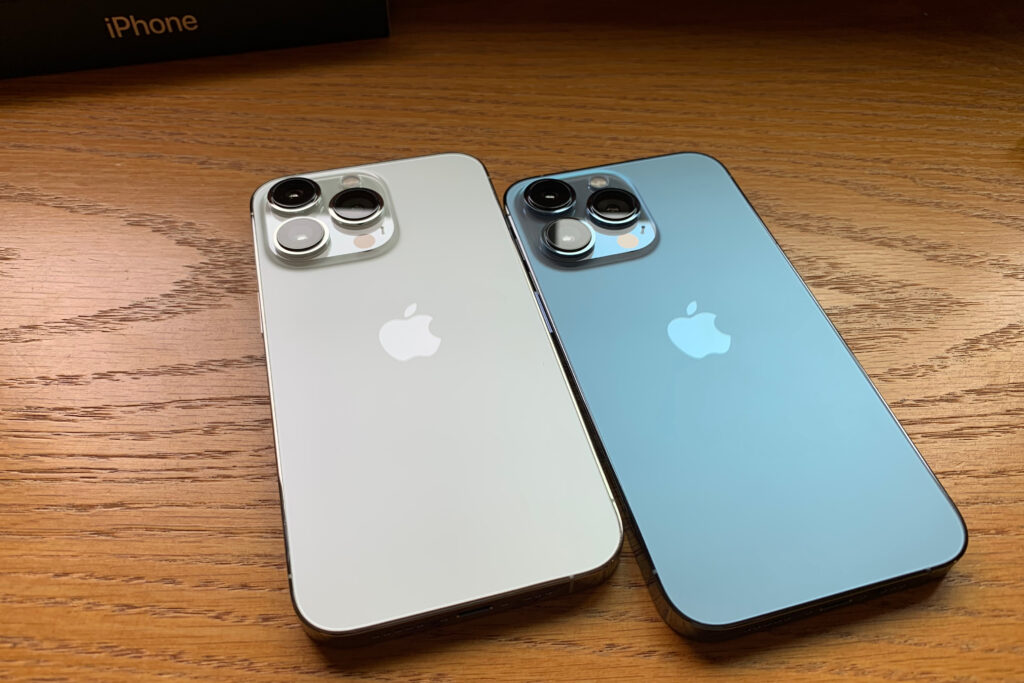 Not so long ago, I swapped smartphones every few months. Various models and underlying platforms from different manufacturers demanded testing and review. But the pace of innovation has slowed, the overall market reached the “good enough” threshold, and I don’t write about tech on a daily basis. Hence, my wife and I have each carried iPhone XS since June 2019. That is until today, when we migrated to the 13 Pro.

For us, the three-generation-old Apple device was good enough. But the promise of ever-more-available 5G and improved cameras tempted an upgrade. We more or less made a decision following the fruit-logo company’s Sept. 14, 2021 launch event. The iPhone 13 Pro checked enough boxes, aided by zero-interest monthly payment option for two years.

Preorders started at 5 a.m. PDT on the 17th, but Apple wouldn’t make everyone wait that long. There was a pre-preorder option that let would-be buyers choose and configure their 13 series model(s), so that when sales started they could quickly purchase. We chose to do just that, but I was ambivalent about really upgrading. Annie and I were both satisfied enough with what we had. So I decided to go to sleep without an alarm set. If I woke soon enough, great. If not, we’d wait. Unbelievably, my eyes opened at 4:58 a.m.

I pulled out my 11-inch iPad Pro M1 and launched the Apple Store app, which prompted about not being ready yet. Few minutes passed, and I breezed through the process to officially order. Couple yawns later, I returned to bed. Our new iPhones were scheduled to arrive via UPS on September 24. I checked this evening: Apple lists estimated delivery dates of October 26 to November 2 for the same two phones, if ordered now.

In another mad-hatter move to let circumstance lead decision-making, I decided to return the mobiles for refund should they be delayed. Friday afternoon (the 24th), unseasonably torrential rains and thunderstorms roared through San Diego County. Evening came, 7 p.m.-latest scheduled time passed, and Brown had yet to come. I mentally started preparing to keep the XS. Then, finally, around seven-forty-five, the UPS driver came to my door carrying two boxes. While signing, I offered my condolences for his late-night, which was hours from finishing. “I would rather be safe” than done, he said.

Yesterday, we opened the Sierra Blue 13 Pro for Annie to handle. If she found the thing unwieldily or undesirable, I would return both devices. She got the tactile experience, powered off, twice more. Something bothered me that I didn’t share for concern it might unfairly influence her reaction: In September 2014 analysis, I explain how “In Good Design, Balance Of Benefits Is Everything“. The concept is functional and physical—how functions finely work well together and how the thing feels to handle and use. Presumably because of the three-camera design, iPhone 13 Pro is top-heavy when held and wobbly laid back downwards (because of the lens protrusions). The thing is not physically well-balanced. That’s a nitpick but nevertheless correct.

This afternoon, after additional discussion, we made the switch. I can’t imagine how the migration process could be any easier. Putting the new and old phones side-by-side starts the process, which worked flawlessly. When complete, iOS 15 presents a screen to properly erase data and all settings, remove activation lock, and log out of iCloud. We did this for both phones, which will go to Apple as part of a so-so trade-in credit. I considered selling either or both XSes but found fairly comparable prices posted on Craigslist, which would be more of a hassle. We considered trading in with one of two cellular carriers, which would offer considerably more—$800 from one of them. But the pay-out is monthly bill credits for up to 30 months. I didn’t want to be locked in, which is one reason we ordered the unlocked 13 Pro.

I can’t comment much about the user experience, from just a few hours. But I preliminarily can say that the screen is gorgeous; the apps and UI feel fluid; and 5G is about six times faster than my home wired Internet. That said, the XS screen satisfied, apps and UI responded quickly enough, and 4G LTE was plenty fast. Meaning: The 2018 release-year model was good enough, and achieving that threshold in a relatively stable technology category is the nightmare success that product developers simultaneously hope for and dread.

Had the fruit-log company done like last year and kept the better camera features for the Max model, we would not have upgraded. That’s a dealbreaker for me. Another: Pricing. We wouldn’t even consider switching if that meant buying both smartphones outright. Apple CEO Tim Cook would have to kick down my door and pry the XS from my tightly-clutched hands, otherwise.

That’s a wrap for now, until days of hands-on experience tally up.