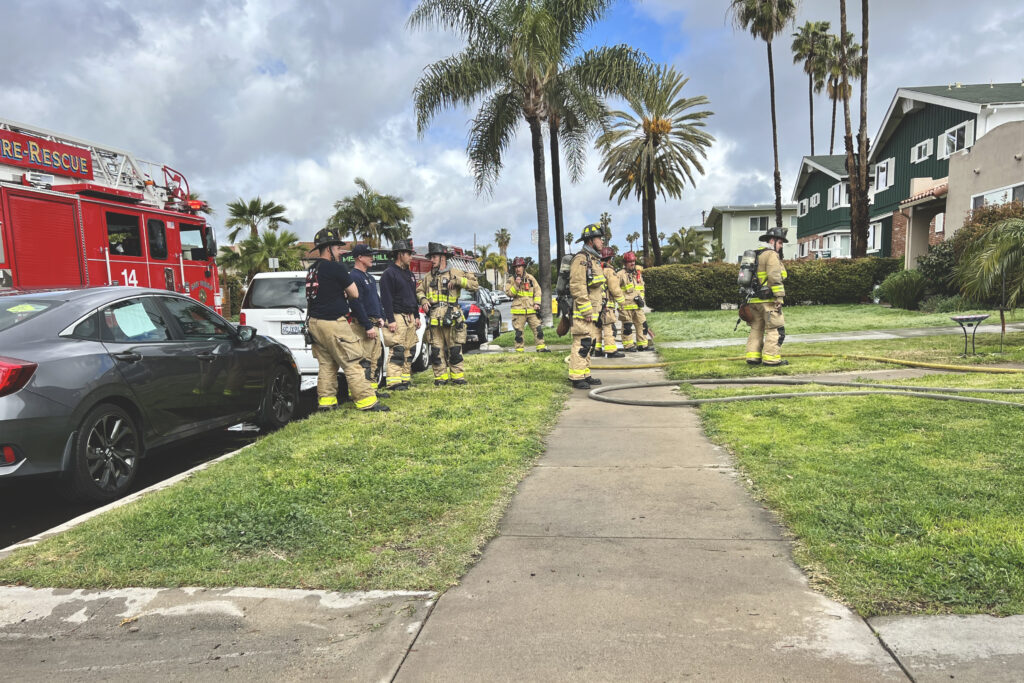 I came upon the strangest circumstance today: Firemen rushing into a home with water hoses to put out nothing. The residents hadn’t called for emergency services, and they were surprised to be cleared out onto the street. The Featured Image, taken quickly using iPhone 13 Pro, shows some of the gallant first responders after everyone realized that a bystander had badly blundered.

This, ah, older gentleman observed what he thought was smoke coming out of a vent, which is why he rang 911. What he really saw: Steam from someone showering. Whoops. My first inclination would be to bang on the door yelling “Fire!” Wouldn’t you? Maybe he did but there was no response because the person was in the shower and she couldn’t hear him.

The law of unintended consequences is this: As the old saying goes,  the road to Hell is paved with good intentions. The gent’s motivation may have been well-meaning but his interference wasted valuable resources, brought firemen to where they weren’t needed, and (surely) scared the people peacefully living in the house—all for starters. The old guy overreacted and bumbled into a situation whose context he didn’t understand and that he misconstrued.

Oddly, the false fire alarm got me to thinking about current events. In the Star Trek universe, General Order 1 is the non-interference directive. Perhaps something like it would be appropriately applied in the real world. As I write, Day 10 of Russia’s invasion of Ukraine is underway. I wonder: What will be the consequences of the West’s interference? The United States, other nations, and high-tech companies like Apple and Google have imposed sanctions onto Russia, which hurt the people living there but so far has done nothing to deter the country’s president, Vladimir Putin, from stopping, or even slowing, the incursion.

Meanwhile, with Putin resolute and his troops advancing, Western supply of arms and even fighters stalls what looks like an inevitable defeat. Prolongation means more Ukrainians (and Russians) killed and greater destruction of infrastructure, businesses, and residences. Strangely stated, a quicker Russian victory would save lives and preserve citizenry’s livelihood. That opportunity has passed. The measure now is the extent of misery suffered and, of course, tragic loss of life.

Do not misunderstand:  I do not defend the invasion or the Russian president’s actions. I merely point out that the best of intentions likely will lead to unintended consequences. While worse in Ukraine, suffering surely will be global. Sanctions will ripple back to those countries and other entities imposing them: Disruption to banking, energy, and supply chains are already underway beyond Russia. Think catastrophic economic blowback.

A nation’s sovereignty should be sacrosanct. The fight to save Ukraine, including the arming of regular citizens, is valiant—while president Volodymyr Zelenskyy’s decision to stay, rather than to flee, is heroic and inspires his people to stand and fight the invaders. But, to reiterate, I keep wondering: Will well-meaning Western actions meant to save Ukraine instead lead to its destruction—and inflict global economic and societal trauma? The answer is a story being written right now, and the final chapter is far from finished.