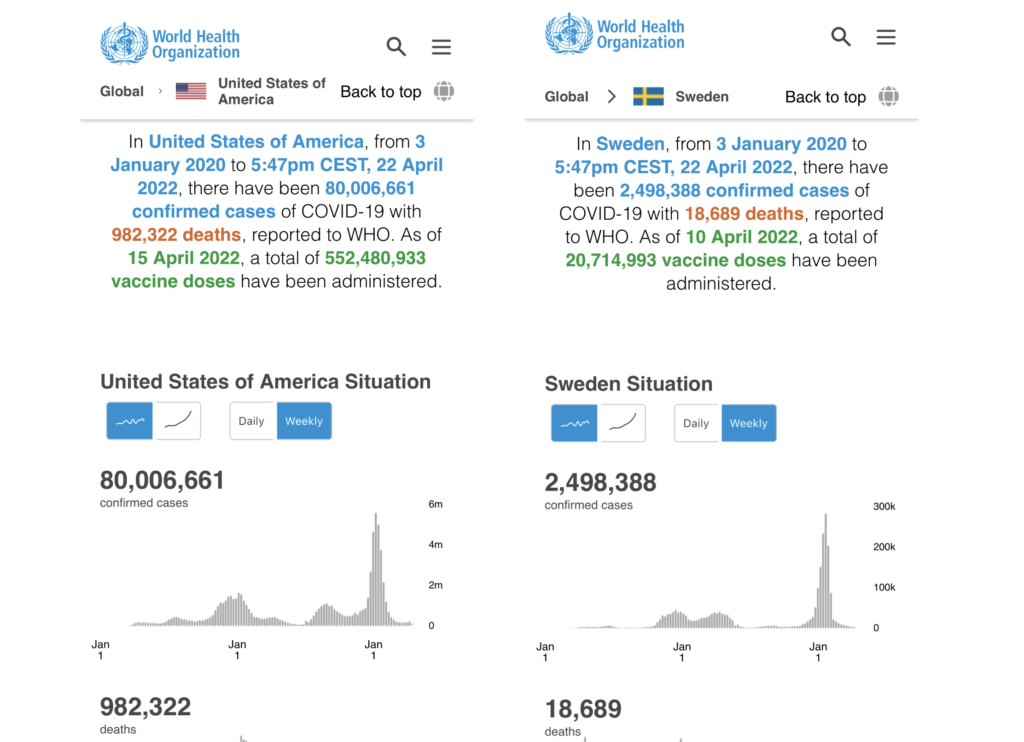 Yesterday, my wife and I read an essay that praised Sweden’s approach to combating SARS-CoV-2 (severe acute respiratory syndrome Coronavirus 2)/COVID-19. The prescient tome published two years ago, only about a month after World Health Organization declared a pandemic. The country chose not to shutdown, unlike many others across Europe, North America, and parts of Asia. Outside health officials, assisted by the news media, lambasted the plan: Keep the economy and society stable while letting viral spread quickly achieve herd immunity.

I wondered: How well did Sweden fair and how does the outcome compare to the United States? So, today, I moseyed over to the WHO’s website for a look. As of April 22, 2022, in Sweden: 2,498, 388 confirmed cases (e.g. infections), from which there are 18,689 deaths. Divide one into the other and you get a case fatality rate of .75 percent.

For the USA: 80,006,661 confirmed cases and 982,322 deaths. By my math, that works out to a case fatality rate of 1.2 percent. Sweden stayed open and its CFR is lower than the United States, where aggressive mandates lasted more than 18 months—even after the arrival of vaccines.

But there is another measure: Mortality, which normalizes the number of deaths per a set number of individuals. The smart data collectors at John Hopkins University standardize for every 100,000. That puts the United States in the Top 20 (eighteenth) with 300.86 per 100K. Sweden: 185.05. Once again this figure is lower.

The Swedish experiment: Stay open, let infection lead to herd immunity. The U.S. experiment: Close up, wait for vaccines, immunize, and reopen slowly. How many trillions of dollars did the United States spend, or lose in lost productivity and revenues, to achieve less than Sweden essentially doing nothing to stop SARS-CoV-2 from spreading? You don’t want to know, and neither do I. The answer is sickening.

But I will say this: Adhering to WHO guidelines, the U.S. Centers for Disease Control and Prevention counts every death as COVID-19 if the person tests positive, regardless of the primary cause(s) being something else. That’s not whacko conspiracy crap, and I thought it must be until reading such policy on both health agencies’ websites. Meaning: There is a vast difference dying with COVID-19 and because of it. Imagine similar testing for the common cold. Common sense says lots of people are infected and, like the Coronavirus, might not even know. But they died of something. What a study that would be to test everyone that dies for several cold strains, particularly if—as I hypothesize—numbers could be as high, or higher, than COVID-19.

The point: If with COVID-19 skews the data, then the number of Coronavirus deaths could be considerably lower than the official count, which would reduce the CFR. For the average American, chance of surviving an infection is 98.8 percent if we assume a case fatality rate of 1.2 percent. But the real CFR is almost certainly lower—and, yes, that’s a hypothesis but one I would bet money is spot on.

Returning to Sweden, some recommended reading: “Sweden’s inconvenient COVID victory: Were millions of people denied freedom for nothing?” by Johan Anderberg, author of book The Herd: how Sweden chose its own path through the worst pandemic in 100 years. “What Sweden Got Right About COVID“, by Shannon Brownlee and Jeanne Lenzer. Dek: “The U.S. botched the pandemic—overprotecting kids at low risk of serious illness and under-protecting older Americans. Stockholm pursued a light touch and fared far better”.