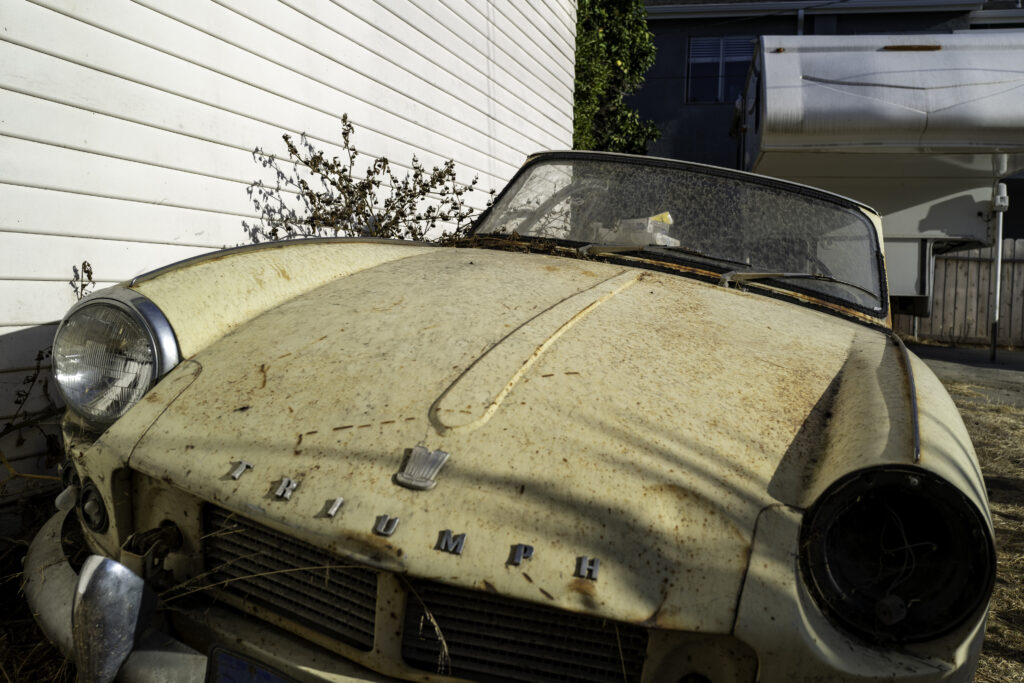 This Spitfire sputters no more. Its flame is extinguished. Late afternoon, I came upon the derelict on the alley side of a garage, in San Diego community University Heights. I had cut through a property after dropping off a bag of redeemable aluminum cans. One of my neighbors scours garbage and recycle bins for them. Anyone would assume, based on scruffy appearance, that he is homeless. Rather, the gent is nearly blind—with only marginal peripheral vision.

We met a few years ago, as he scrounged behind our apartment building. I learned about his ailment, which in my estimation is cruel. He had been an active individual who travelled extensively, and he obviously is quite intelligent and resourceful. Timing turned out to be good for our meeting, because I had an extra Google Hub—freebee from another purchase. I offered him the voice-activated device, which benefit took some effort to explain.

But once he got the basic concept, the gent gladly accepted the thing and took it home, where a friend helped set up the device. Whoa, what life-changing impact: Now he could call up books or news stories to be read to him; conduct Internet searches (basic stuff starting with weather forecast); and listen to music or podcasts—all by voice command. 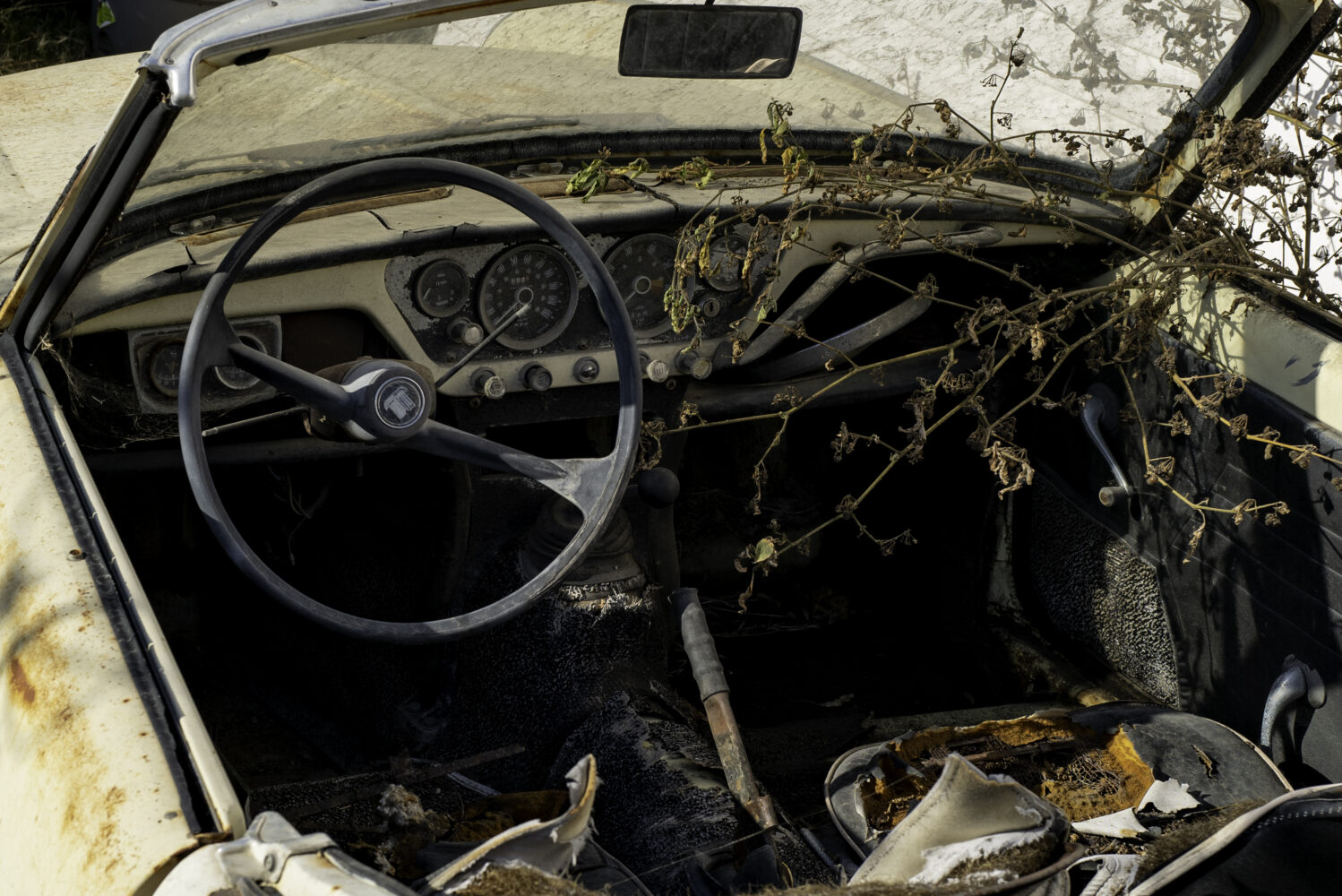 Whenever our recyclable can collection fills a garbage bag, I walk over and leave them where he parks the cart he pushes down the alleys. Some days he hears me and comes to the door to chat; other times, like this afternoon, we miss one another.

Anyways, that’s how I unexpectedly passed by the once-convertible in the Featured Image and companions. Based on rust, decay, and license plates that expired in 1982, the once triumph—eh, Triumph capitalized—of sportster envy has long languished in its final parking place. 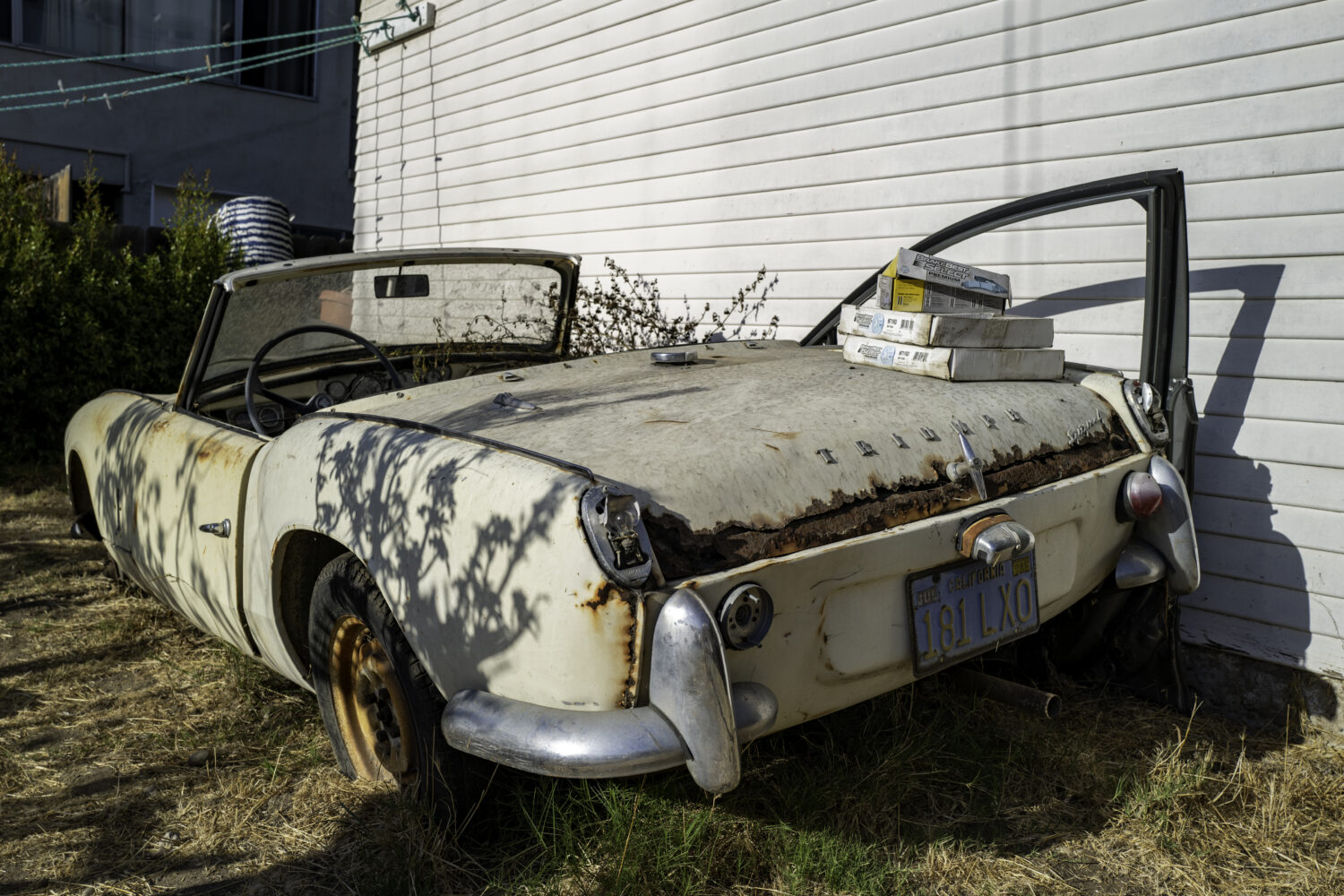 Forty years ago. Ronald Reagan was president. The Cold War persisted. The Soviet Union existed. Germany was two countries and Czechoslovakia was one. The Falkland War started and ended (Brits won). The first Millennials celebrated their first birthdays. Ma Bell (e.g. American Telephone & Telegraph; AT&T) provided phone service to seemingly everyone. Top-grossing film “E.T.: The Extra-Terrestrial” released. “Physical” by Olivia Newton-John (who died a few days ago) was Billboard’s No. 1 song of the year. Dolby introduced Surround Sound. The first Compact disc was manufactured, in Japan.