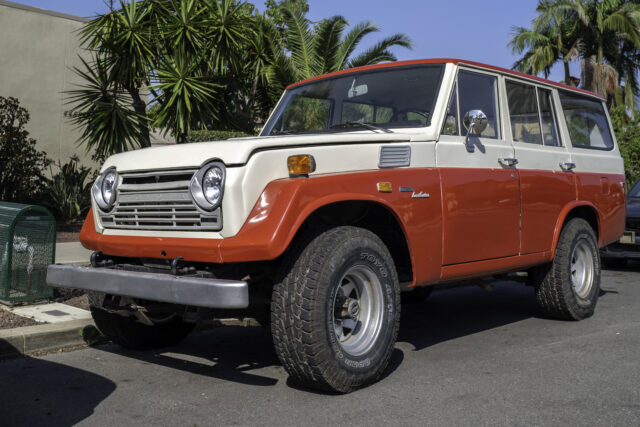 I am not a car guy, but even poor pitifully mechanically-challenged me croons over this Land Cruiser. Anyone know the vintage? The color and styling beam classic. My wild, uninformed guess is a model from the 1980s.

On Oct. 21, 2022, I just happened to come upon the vehicle as it was being parked. I waited a bit, rushed back, and grabbed a single shot using Leica Q2. My intention was to get more vantage points. But I returned later to find that the owner had pulled over a protective cover. The off-red and beige beauty is still parked with fitted-tarp. Protection from the Southern sun prevents photo followups. Oh, well. 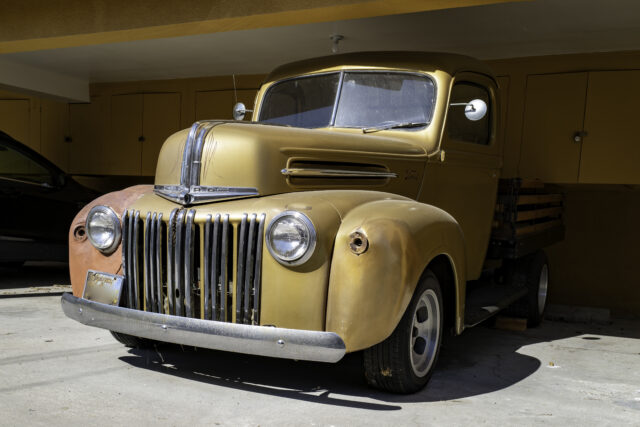 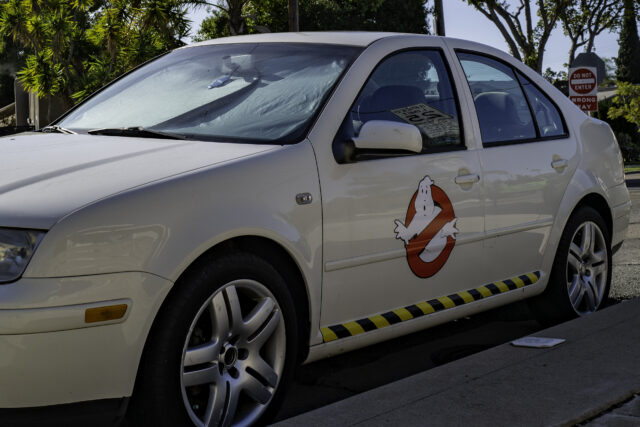 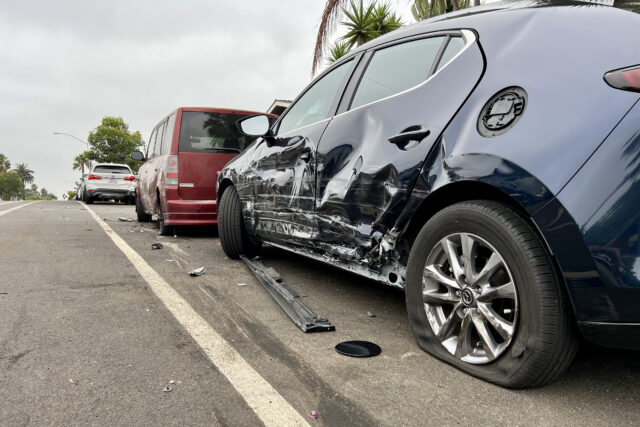 My distain for traffic circles rises in the aftermath of an accident overnight that damaged four vehicles—leaving one, perhaps two, as total losses. The Mazda that dominates the Featured Image suffered the most damage. Impact pushed the car partially onto the sidewalk.

The crash occurred about 2 a.m. PDT—so loudly that my wife heard, and we aren’t exactly close by. But some neighbors who were woke from sleep and investigated. Based on their reports, the driver didn’t flee (and I can’t say that he could have, since no one revealed to me the condition of his car). He waited for first responders, including police, who may have arrested him for suspicion of driving under the influence of something. 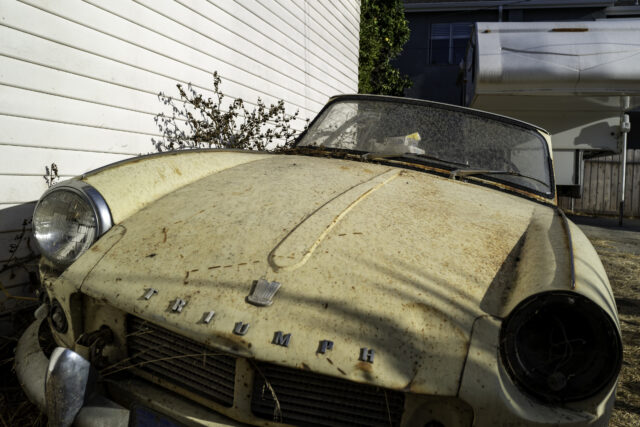 This Spitfire sputters no more. Its flame is extinguished. Late afternoon, I came upon the derelict on the alley side of a garage, in San Diego community University Heights. I had cut through a property after dropping off a bag of redeemable aluminum cans. One of my neighbors scours garbage and recycle bins for them. Anyone would assume, based on scruffy appearance, that he is homeless. Rather, the gent is nearly blind—with only marginal peripheral vision.

We met a few years ago, as he scrounged behind our apartment building. I learned about his ailment, which in my estimation is cruel. He had been an active individual who travelled extensively, and he obviously is quite intelligent and resourceful. Timing turned out to be good for our meeting, because I had an extra Google Hub—freebee from another purchase. I offered him the voice-activated device, which benefit took some effort to explain. 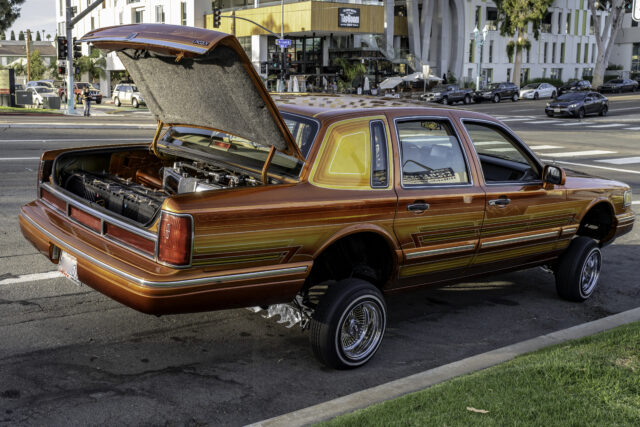 The modern classic isn’t the one you buy but the one you make. This electric lowrider is an absolute hoot! I wonder what is the range—or if it matters. Vehicle like this is meant to parade, bouncing along, with others; granted they would be vrooming from combustion engines. 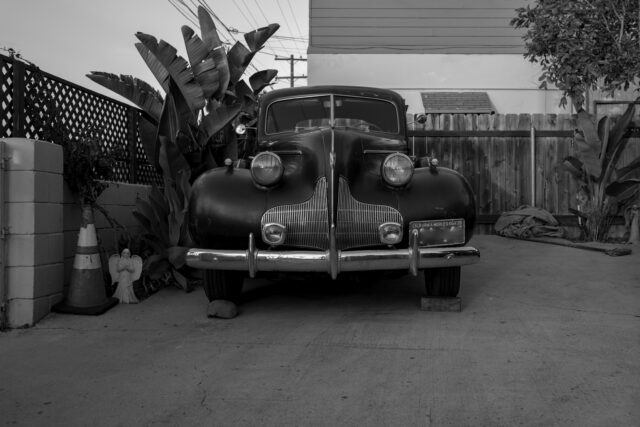 For weeks, I have seen evidence that one of my neighbors keeps, or recently acquired, a vintage vehicle. The massive shape was unmistakable under some kind of natural fiber covering. This afternoon, I got glimpse of the classic car, parked open view. Early evening, I returned with Leica Q2 Monochrom.

The Featured Image is one of the two photos, uncharacteristically captured with auto-settings. Vitals: f/3.5, ISO 200, 1/125 sec, 28mm; 7:39 p.m. PDT. A snippet setting sun provided just enough daylight. I had few composition options, because of how the automobile is parked and my shooting through bars of a fence. 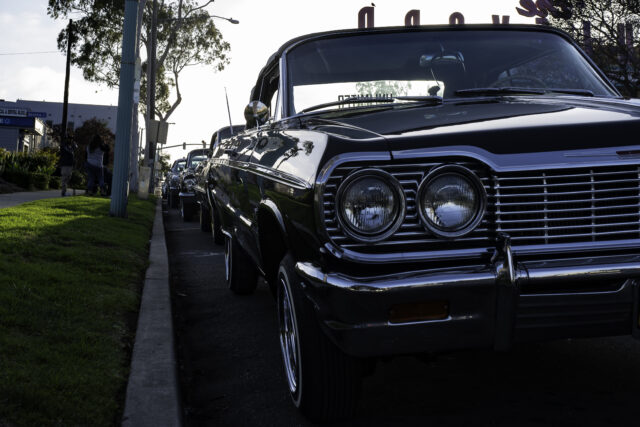 I wonder: Are the lowriders cruising El Cajon Blvd tonight, or were classic cars merely parked along The Boulevard between Georgia and Florida streets? At 6:46 p.m. PDT, I came across a line of shiny roadsters with whitewalls. My last encounter with the cruisers—many bouncing along as they drove down El Cajon—was years ago.

Circumstance brought me to that part of University Heights on a Friday evening: Dropping off AT&T U-verse equipment at Park Blvd UPS Store for return shipment. Maybe I should get out there more often, and on the next first Friday of the month to see if perhaps there is lowrider cruising. 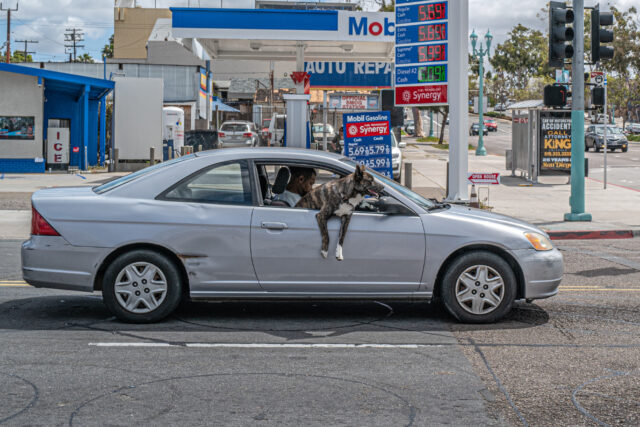 At the corner where University Heights ends and North Park begins, my wife and I waited to walk across El Cajon Blvd. I turned to see a car come up Texas Street to the intersection; a big `ol dog hung out the window. I pulled around Leica Q2 for a quick shot, not wanting to draw the attention of the driver and possibly to offend him.

The Featured Image is about a 95 percent crop, which deliberately includes price of gasoline—down from a high of $5.96 per gallon as recently as last week at this station and others around my San Diego neighborhood. Vitals, aperture manually set: f/8, ISO 100, 1/500 sec, 28mm; 11:38 a.m. PDT, today. 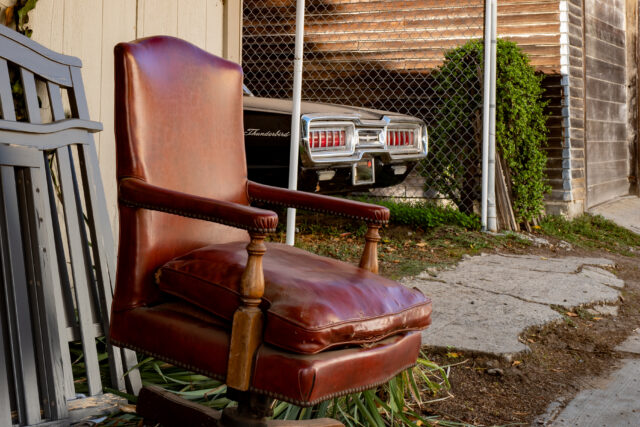 When stopping to look at the crusty chair, abandoned in a University Heights alley, I thought it would nicely juxtapose with the classic car—both being vintage. My mistake. 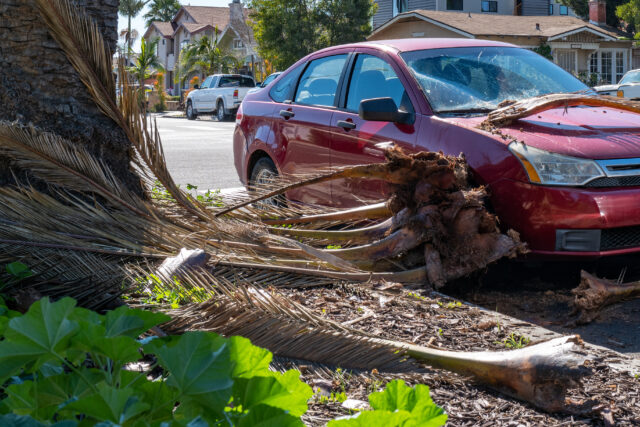 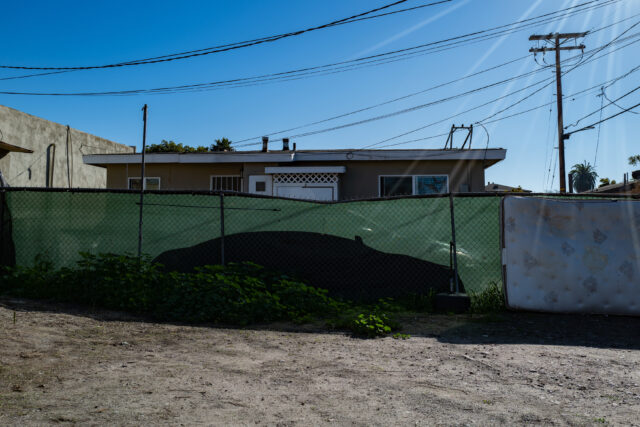 In the same Louisiana-Texas alley where I saw the clock on Dec. 1, 2021, something surprised last week—and I only noticed because the empty lot before the shadowed green screen is clear of obstructions.