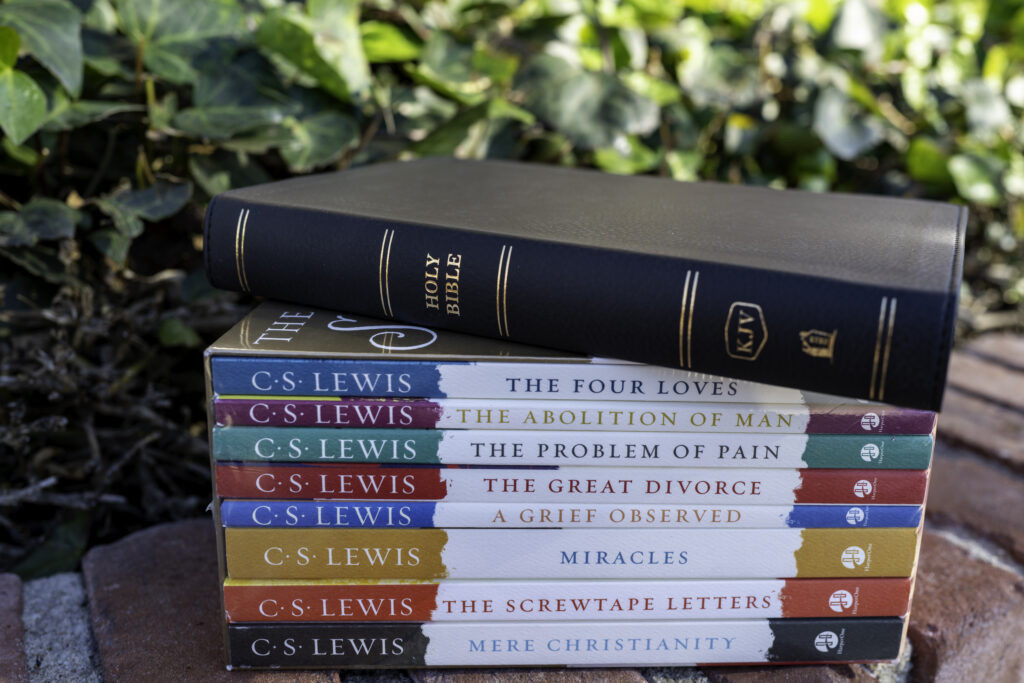 Because my smaller Bible also shows significant wear, I thought maybe to replace them both—with a somewhat compact reference/study New King James Version. Lesson learned: Act, don’t procrastinate. I would rather buy from a local business, than an online retailer like Amazon, and thus planned to return to La Mesa Christian Bookstore, where we bought two Bibles for my wife in January 2021. But the week slipped away, as I dealt with another daughter drama. Today, at last, we drove East.

Unbeknownst to us, ownership changed (April of last year) between visits. More importantly: Inventory. Yesterday. During our first visit 22 months ago, the selection of new and used books really impressed. Annie left with new NKJV reference and used NASB study Bibles. But today we found fewer books to explore. Turns out, ahead of the store’s Vision Night yesterday, a big inventory switch occurred; new replaced the old, which was packed in stacked boxes behind the cashier’s counter for future sale online.

The shop feels neater, roomier but also lighter on stock. For example, I couldn’t find a single NKJV and most of the brand new Bibles are large print. It’s not that there are fewer books to sell, simply the new owners chose to remove many. If the goal is to make a more-inviting community space, mission accomplished. But businesses thrive or die on sales. Having lots of choices in a new and used bookstore increases likelihood perusers will become purchasers.

But I have like zero retail sales experience, so don’t regard me as any kind of authority. May the store succeed, and in a way it nevertheless did with us. I had long wanted to acquire some C.S. Lewis titles, and LMCB sells an eight-book set (which, I discovered tonight, Amazon hawks for a little less; Christian bookstores are a dying breed, so I am satisfied to shop local and pay a little more).

After considerable, careful consideration, I switched strategy and bought the Minister’s Bible in (old) King James Version. Size and simplicity appealed to me—between my compact NASB and larger RSV. (Interesting tidbit: NASB and RSV share similar heritage, both being adapted from the American Standard Version.) Leathersoft cover isn’t my preference but given recent problems with aged leather perhaps simulated is better than the real thing.

As for simplicity, the pages are filled with chapters and headings. There are no footnotes or cross-references; reading is clean and distraction-free. Between the Old and New Testaments is the 189-page Resources for Ministers. I keep hearing how Believers are supposed to be Kings (or Queens) and Priests, so maybe the resource section is even better for the layperson like me. We shall see.

Meanwhile, Annie has graciously given me her spare NKJV Center-Column Reference Bible. Turns out the one we purchased from LMCB was a misprint. Throughout portions of the New Testament, Jesus’ words are in black and the narrative in red. Whoops. Publisher Thomas Nelson freely replaced the troubled tome, which we were instructed to keep; no need to return. I have inherited it for use when greater context is needed or when the older language translation confounds.