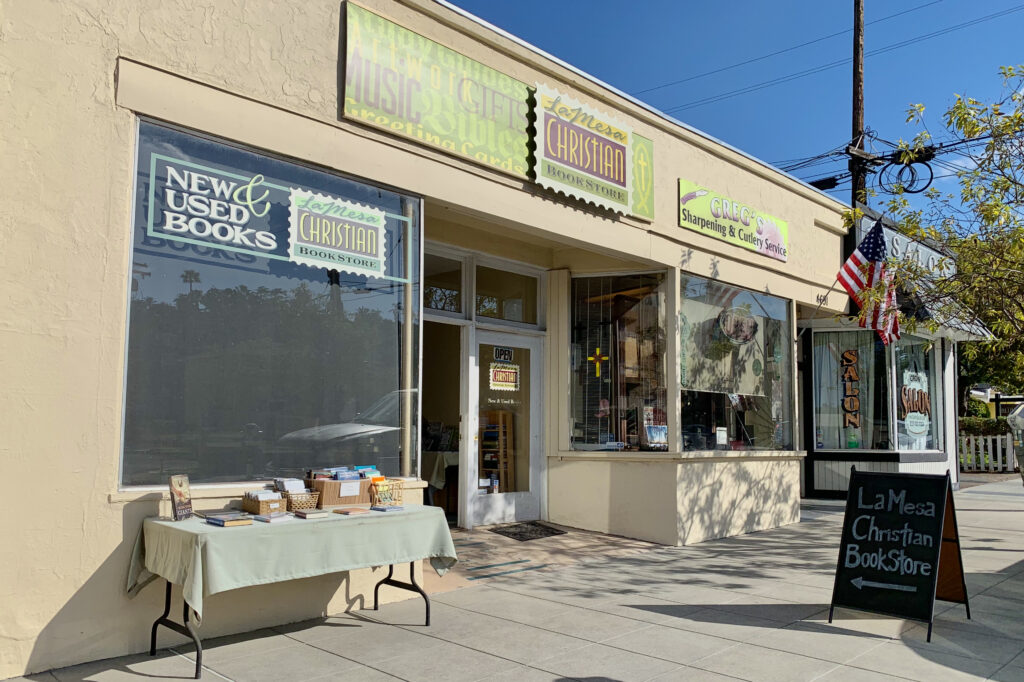 Approaching La Mesa Christian Bookstore, we discovered a new and used seller, which improved the translation choices and vintages available. Starting at the previously owned shelf, Annie looked over a variety of styles and translations before picking out the leather-bound New American Standard Master Study Bible with Encyclopedia and Concordance published in 1981 by Holman ($25). Coincidentally, my other Bible, and the one of the two I mainly use, also is NASB—small-print, one-hand-holding size, leather-bound, and also published by Holman. The used NASB is the 1977 revised translation and my own either is 1971 or 1975 (published in the later year).

We discussed New King James Version as another option, and the best selection of choices was on the new shelf. There she found a Thomas Nelson-published, Leathersoft “classic verse-by-verse, center-column, reference Bible” ($60). The book was published in 2019 and copyright 1982. Annie found the translation, but as importantly the font-style and layout, to be pleasingly readable. She struggled to choose which. “Get them both”, I said. She agreed, and we bought both.

After locking the books in our Honda’s hatch we walked over to La Mesa Blvd., which is so quintessentially small town that the street could be a set for any number of television shows. But COVID closures sack some of the charm. We instead walked a dystopian drama, where there were few people but many vacant stores. I cursed Governor Gavin “Gruesome” Newsom more than once.

Thursday’s weather was blissfully sunny and warm—21-degrees Celsius (70 F)—perfect day for outdoor dining, but that’s an activity prohibited by the Governor. The bustle of casual eaters would have energized and enlivened La Mesa Blvd. For the Wilcox couple, what should have been a wistful walk was more like the condemned dragging chained legs towards the gallows. We stopped nowhere else, returned to the car, and drove home.