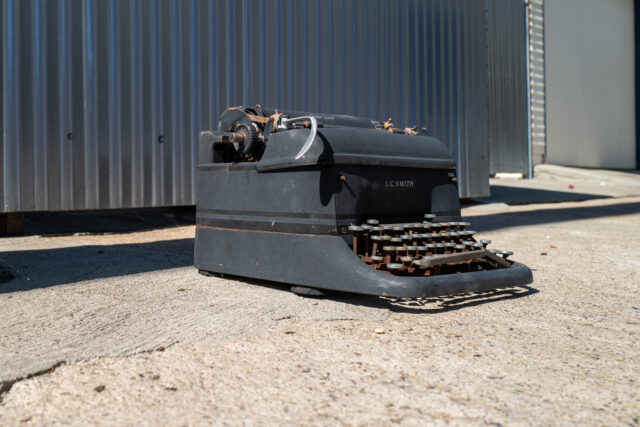 My handwriting is notoriously bad. Teachers told me during elementary school years and no amount of sincere effort improved my penmanship. I was relieved at the age of 14 to inherit a manual typewriter; I don’t recall why the family owned one or how it came to be in my possession but the thing became my go-to for homework and personal writings. If I rightly recall, Royal was the brand.

I will always be fond of typewriters, even if my typing long ago transitioned to computer keyboard. The appeal grows with age and nostalgia for archaic technology. So I was both delighted and disappointed to see that someone left an old L.C. Smith model in a nearby alley—and I don’t recall which one. As you can see, this old machine is rusted and presumably beyond meaningful repair—although the thang would fit properly on appropriate movie set showing decay and dystopia. 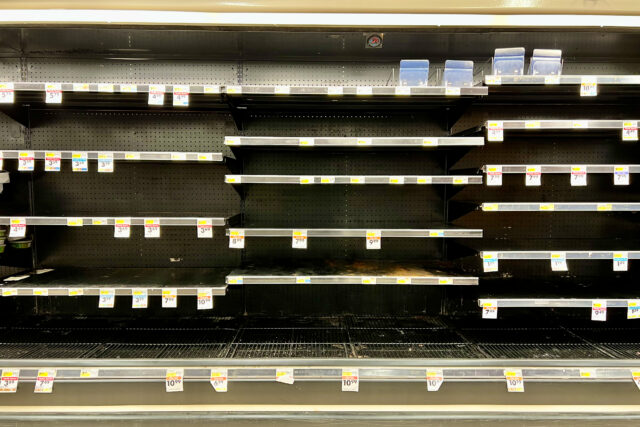 Someone might blame the so-called supply chain crisis for this unnamed (I won’t say) supermarket’s empty packaged, prepared, processed meat section. I’d like to think that to celebrate the World Series and return to big gatherings before the big screen following more than 18 months of SARS-CoV-2 (severe acute respiratory syndrome Coronavirus 2)/COVID-19 lockdowns that a whopper shopper cleared out the Bologna, hotdogs, and other deli delights for the big game.

The temperature gauge is in the red, which could indicate cooling malfunction—that despite stocked goods on either side of the empty section. As I walked by, a store employee wheeled a cart stacked with boxes of deli-fresh replacements. You’re welcome to blame the supply chain, and who doesn’t these days? I won’t. 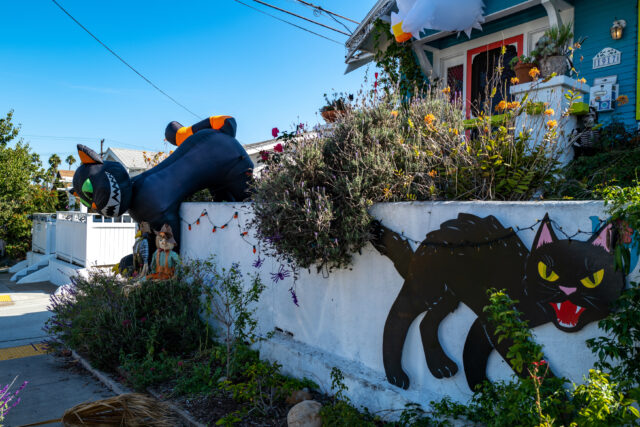 I cannot properly express my relief that what we affectionately call the “1917 House” has returned to its festive state following last year’s hiatus, presumably brought about by SARS-CoV-2 (severe acute respiratory syndrome Coronavirus 2)/COVID-19 […] 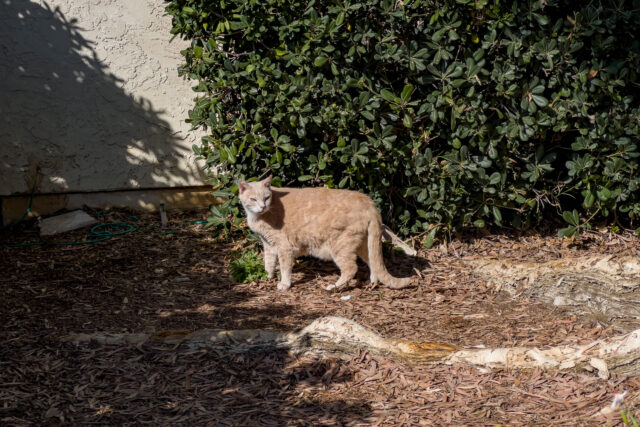 Blind kitty Petey shares space with Spartacus—and, yes, both are real names. Their residence is just a few doors down from the Schoolhouse, which my wife and I almost bought in late-summer 2017. Click the link for an education in home buying that unfortunate experience teaches better than anything from the classroom.

I used iPhone 13 Pro to capture the Featured Image and companion, on Oct. 24, 2021. The original files were RAW imported to Adobe Photoshop Lightroom Classic, cropped, edited, and exported to JPEG. I am dissatisfied with the color profile changes applied during import for the smartphone and will likely use different software in the future. Vitals for both: f/2.8, ISO 32, 1/602 sec, 77mm; 10:28 a.m. PDT. 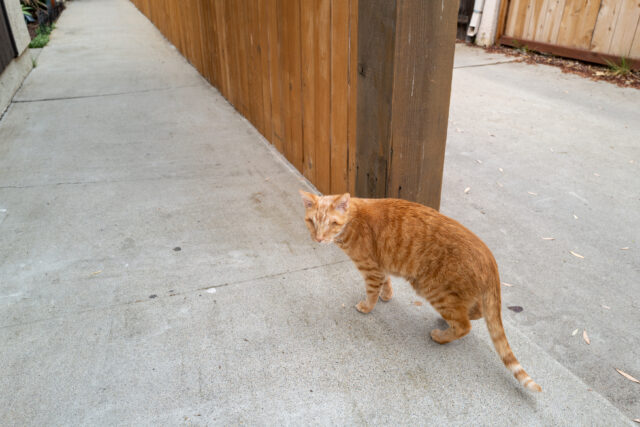 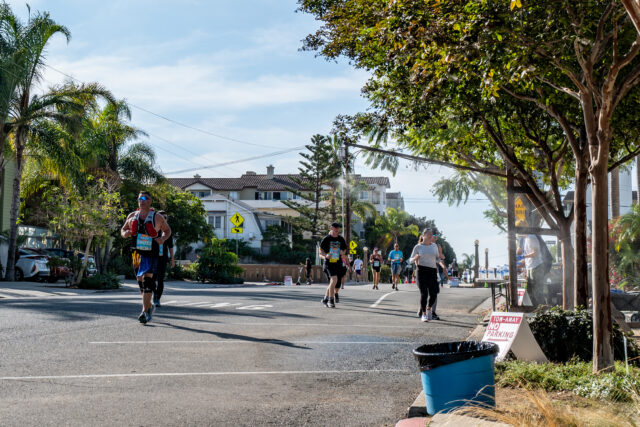 Today here in San Diego, more than 20,000 runners participated in the Rock ‘n’ Roll Series Marathon and Half Marathon, which occurred concurrently. The routes go through and around my neighborhood of University Heights—Hillcrest, Normal Heights, and North Park. Highway 163 partly closes down for participants, too. SARS-CoV-2 (severe acute respiratory syndrome Coronavirus 2)/COVID-19 lockdowns forced cancellation of last year’s event.

My wife and I walked along Georgia towards the bridge that crosses over University Ave., hoping to see runners below. But the bulk of them had long gone by. The Featured Image shows a small group coming up to the misting and watering station along Georgia Street between Lincoln and the overpass. I used Leica Q2 to make the moment. Vitals, aperture and shutter speed manually set: f/8, ISO 100, 1/250 sec, 28mm; 9:40 a.m. PDT. 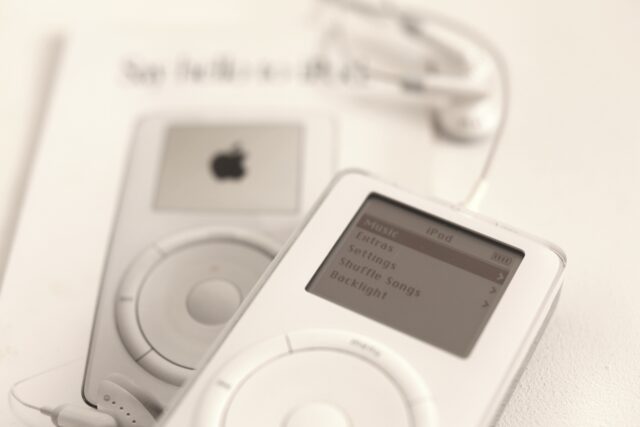 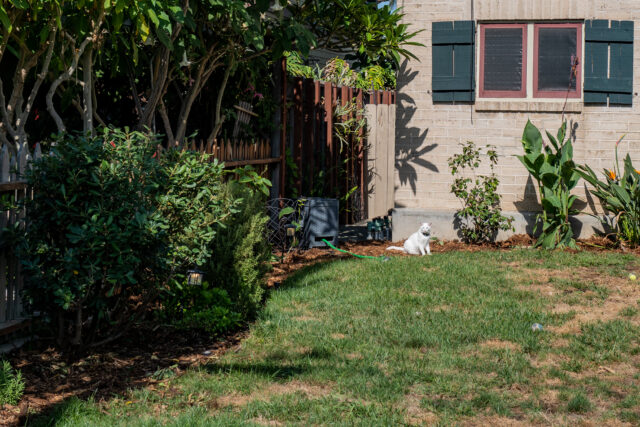 Early last month, I passed by a yard with a white kitty lounging. But barking dogs—two of them—convinced me to move along. Quickly. On September 15, the shorthair appeared again, and I haven’t seen it since. The Featured Image comes from Leica Q2. Vitals, aperture manually set: f/5.6, ISO 100, 1/400 sec, 28mm; 10:13 a.m. PDT. 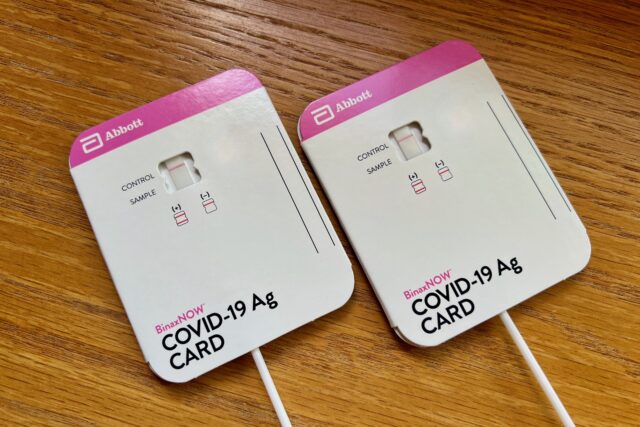 A few days ago, my wife developed a nasty cough, accompanied by flu-like symptoms that include fever; while subsiding, they persist today. SARS-CoV-2 (severe acute respiratory syndrome Coronavirus 2)/COVID-19 is obvious concern. The Delta variant is highly communicable, whether or not somebody is vaccinated. Think nature’s inoculation: Everyone will catch the Novel Coronavirus now. Being vaxxed often will not prevent infection but reportedly minimizes the worst symptoms of the disease. Regardless, everyone is bound to develop some degree of natural immunity if the B.1.617.2 variant continues to be easily transmitted.

Annie’s cough sounds pretty bad. One of my neighbors is an ICU nurse, who asked about my wife and reassured me that her coughing, while frequent, is strong. That’s good. We own an oximeter, which I use to check her blood oxygenation—and it’s excellent! Still, we had to consider COVID-19, since Delta assures SARS-CoV-2 will infect everyone. With Annie hacking so often, and the possibility of spreading the virus—even masked—we decided against going out for a test, like we did eight month ago. 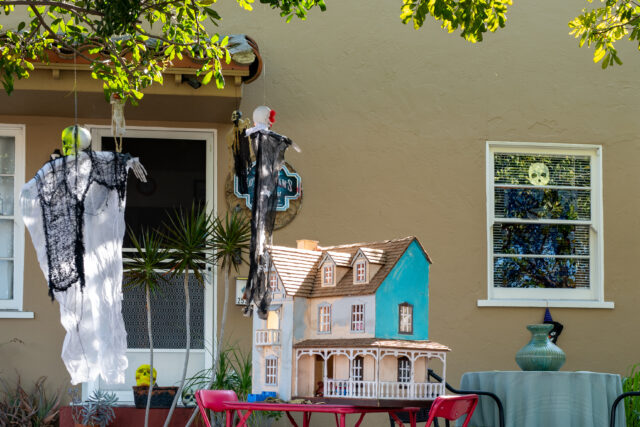 If this scene is to scale, you should be very concerned about the size of the spirits hanging around your place. The question: Are bigger ghosts merely more menacing or do they pose greater threat to the living? 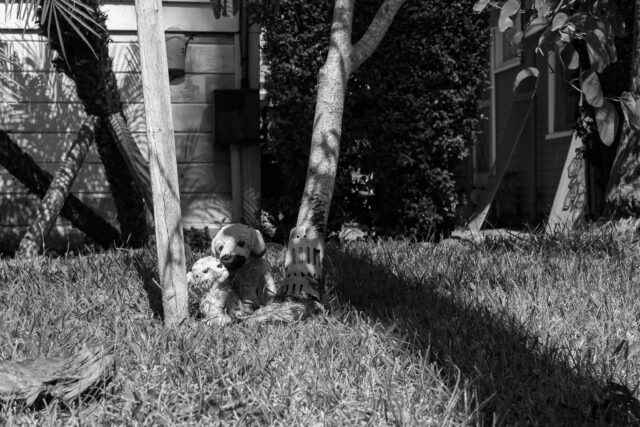 I should have taken photos of these two plushies back when they had more color—before searing San Diego sun and two recent torrential rainstorms weathered them. The pair adorned this yard for months. Faded and ragged from the elements, they appear in black and white, which best presents them. 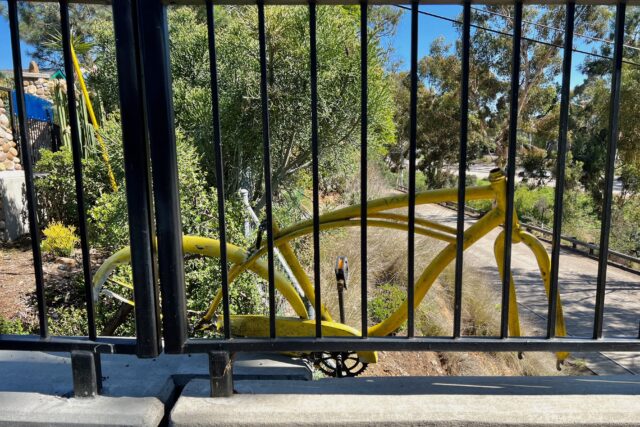 I don’t know what to make of this. Just inside the Vermont Street Bridge, still on the University Heights side, I saw a wayward bicycle frame—early afternoon Oct. 15, 2021. Bike chop shops pop up […]