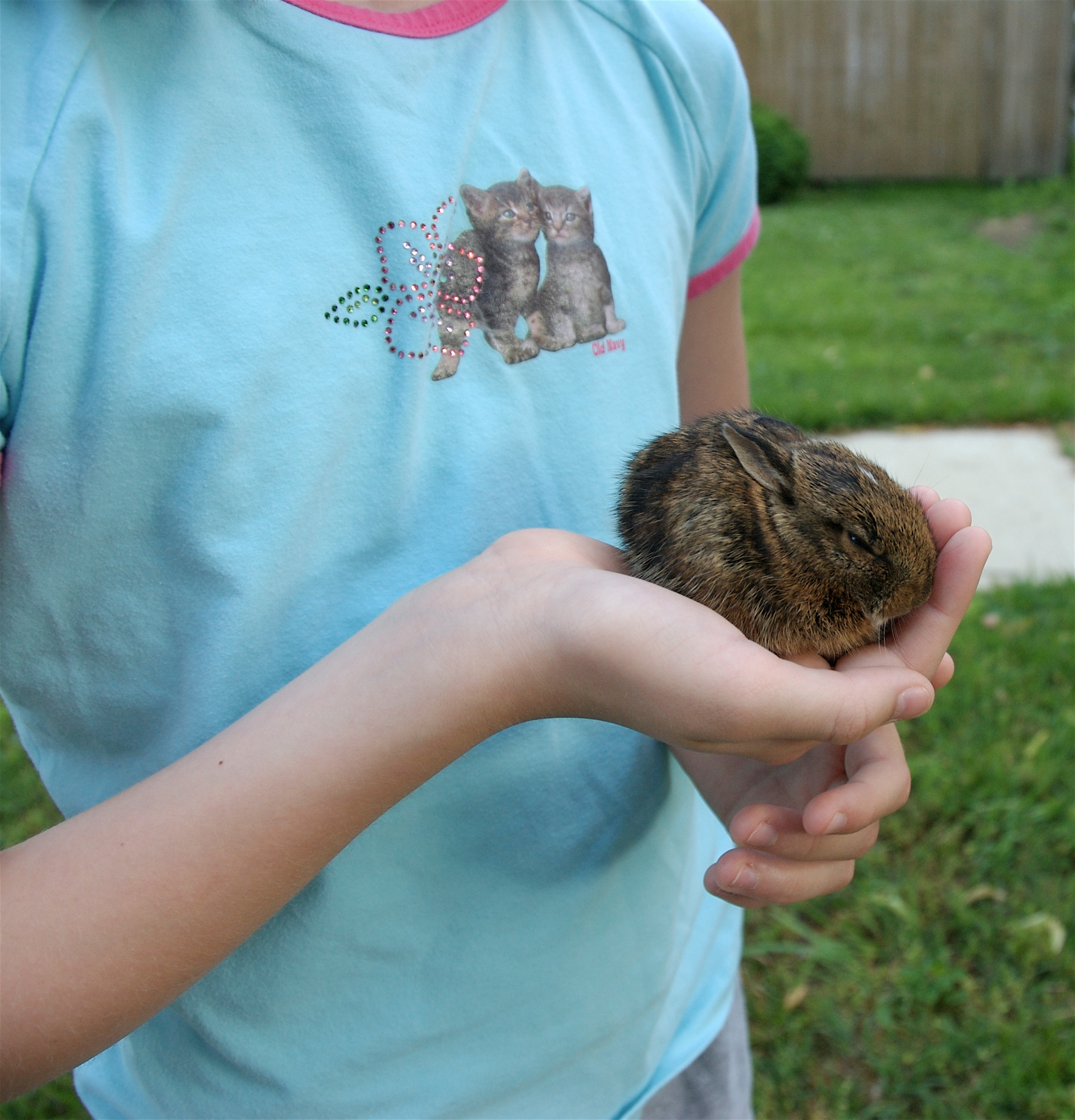 Bubba’s little life ended this morning. We awoke to find the orphaned bunny cold and listless. My daughter held Bubba to warm it, while I phoned the local animal rehabilitator. She advised to immediately bring Bubba in for care. But the bunny died before we could even leave the house. We later wrapped Bubba in a cloth and buried it in the backyard. May the bunny rest in peace.

Bubba’s demise could have come from a number of different factors or a combination of them. I’d like to list some of them and offer advice for anyone coming across a seemingly abandoned bunny (in our case, we didn’t find Bubba).

1. Put the bunny back. Bubba’s likelihood of survival diminished greatly once it was removed from the wild. Less than 10 percent of orphaned baby bunnies survive in captivity. Baby bunnies abandoned in nests, often are not. Mother cottontails generally let the babies alone during the day and feed their young once, sometimes twice, a day. The important feeding occurs during late night, which is also the time the mother looks for her strays. If Bubba had been located in some proximity of the nest, the mother would likely have discovered it. The time mothers come to their young is in darkness.

2. Keep the bunny warm. Baby bunnies need lots of warmth—how’s 29 degrees Celsius—and so they should be kept from the cold. Bubba had tremendous exposure to the elements, even before we inherited him. When I discovered his cool body this morning, he needed immediate warming. We bundled him up overnight in a cosy box, but it was no substitute for the warmth of siblings or the mother during her late-night feedings.

3. Cover the animal in darkness. The two woman who brought us Bubba meant well. They hoped to either find a place for him (where other bunnies lived) or a good home (where other rabbits lived). But carrying Bubba through the neighborhood probably harmed it. We contributed to the problem, with all the handling Bubba got on the street. The bunny needed to be kept in a warm, but dark place—one where the it could feel safe. Bubba suffered repeated shocks by all the handling. It’s a wonder he wasn’t frightened to death sooner than his little life ended.

4. Be mindful of proper diet. Bubba’s finders feed it milk from an eye dropper. One animal rehabilitator warned me last night that cow’s milk is toxic to baby bunnies, which typically are referred to as kittens (yeah, same as baby cats). But Bubba also was too young for greens, which he ate last night before we got him and after we took him home. While the bunny could eat the greens, it couldn’t necessarily digest them. A baby cottontail has a white mark on its forehead that disappears around the time it’s weaned. Bubba probably wasn’t yet ready to eat solid food.

5. Tickle the tummy. The digestive track of a very small bunny isn’t fully mature. The mother nestles its young to facilitate digestion and excretion. We rubbed Bubba’s tummy and genital area to help pass food through its digestive track and also assist pooping and peeing. But that may not have been enough effort if he couldn’t digest the fresh greens. Had we done nothing, his demise might have been quicker and more certain.

6. Seek professional help. Nine out of 10 rescued baby bunnies die in captivity, even as long as a week following recovery. I should have called, rather than e-mail, the local animal rehabilitator last night. Because it was late at night (around 10 p.m.), I chose not to. Bubba’s survival chances might have increased with proper care, including the right formula and company of other animals, last night. He didn’t belong with humans. More importantly, cats have bacteria that can kill bunnies, if not treated within 10 hours or so. Bubba had been roughed up by a cat. I had already planned to take him to the animal rehabilitator today. But today already was too late. 🙁