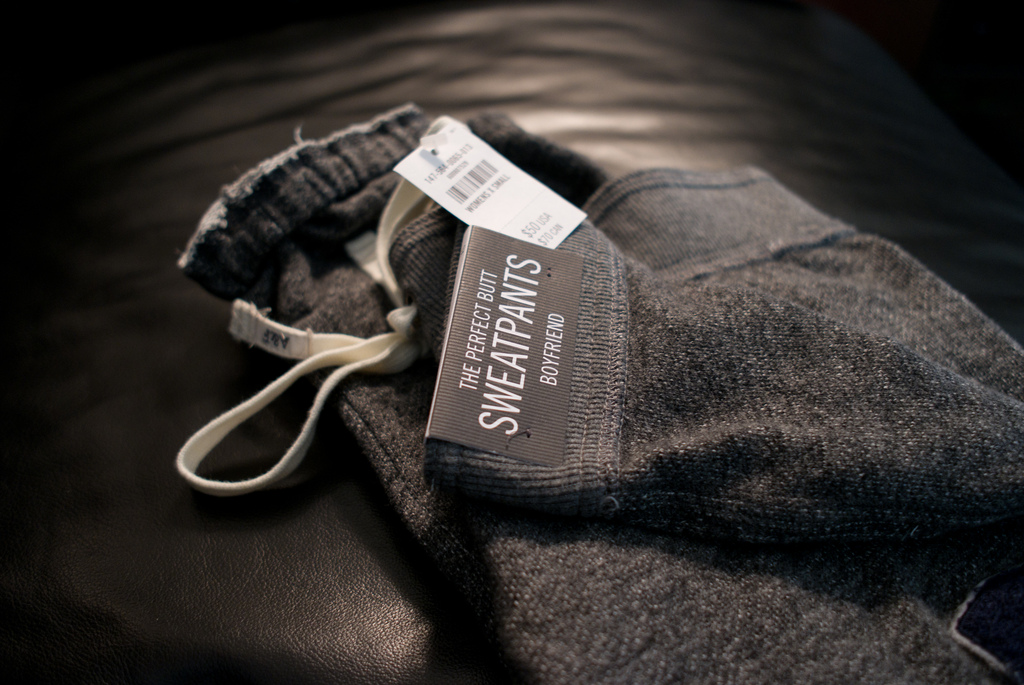 Have you ever heard of a “test” store? I hadn’t until yesterday (Aug. 25, 2010). Abercrombie & Fitch supposedly has one in downtown San Diego. Shopping there meant spending 20 percent more on a pair of sweatpants for my daughter than at another store a few miles away.

The story starts mid afternoon, when Morripopp found the perfect sweats at Abercrombie & Fitch Fashion Valley. But she needed size XS, which was out of stock. So an employee called two other stores and found the sweats at A&F Horton Plaza. Around 6 p.m., my daughter and I drove downtown, where she picked out the sweatpants and I got in line to pay for them. One problem: The sweats rang up $50 and not the $39.90 discounted price from the other store. I told the cashier that the other Abercrombie & Fitch priced the sweats lower. A&F Horton Plaza is a “test store” an employee, who had managerial manner, told me.

Morripopp guessed what was coming next. I refused to pay $50 for sweats costing less than forty bucks at another Abercrombie & Fitch. She went off to the car, disappointed, while I tried to make sense of the situation. The managerial mannered guy said that his store didn’t participate in the 40-percent discounts or 89-cent sales offered at other A&F locations.

I left and started walking to the car, but turned back deciding not to give it up. I approached managerial mannered guy and asked him to further explain what is a test store. He went off again about not supporting the same sales. I asked twice more about what is a test store, asserting that he still hadn’t answered the question. I’ve been lied to enough as a journalist to be suspicious of the way he indirectly answered. He finally explained that the store sells most items full price to see if people will pay it. That’s the “test” in the store.

I didn’t believe him. The Horton Plaza shop is located in one of San Diego’s busiest tourist districts. It seemed to me Abercrombie & Fitch simply chose to gouge tourists willing to pay more—as in full price. I left the store a second time, pulling out my iPhone 4. I downloaded and installed the Abercrombie & Fitch app and then searched for the Butt Boyfriend sweats. OMG! They were available online in three colors for even less! $27.93! WTH? I called Morripopp, who had seen the online sale but wanted grey, which wasn’t one of the discounted colors.

I walked back into the store and bought the grey sweats, not for my daughter but for this story. I felt this post would have more authority if I actually bought the sweats. Also, I suspected the Butt Boyfriend wear could be taken to another store for refund on the price difference. The sweats would be evidence and artwork (the photo above) for my reporting and storytelling.

Whither Test or Tourist?
This morning, I called Stephen Baker, NPD’s vice president of industry analysis. Steve is a helluva smart retail analyst. I asked if he had heard of a test store. “Sure.” He explained that functioning test stores explore different concepts that the retailer might choose to introduce elsewhere, such as changing layout to see customer flow and reaction.

Steve defended the practice of different pricing among retail stores even a few miles apart. For example, a Manhattan retailer might charge 25 percent more than another store of the same chain located in the suburbs. “It costs more to do business there, the people have more money and people are less price conscious,” he said. A retailer next to a Walmart or Costco “might have a pricing zone that’s one store; manilla folders might be the same price as in Costco. Whereas in a store a couple a miles away, they might be 20 or 30 cents higher.” He added: ”I can certainly see not doing chainwide discounting in kind of touristy areas.”

Soon as I disconnected with Steve, I called A&F’s corporate office and asked for media relations. I got voicemail for some woman whose name I couldn’t make out. It sounded something like Eska Hane, which probably is wrong. The more important point: She didn’t return my call before end of business Eastern Time.

This evening, I called the Fashion Valley and Horton Plaza stores to confirm pricing. A Fashion Valley employee confirmed the $39.90 price on the Butt Boyfriend sweats. At Horton Plaza, a different employee said that the shop limited discounts to clearance items and didn’t offer sales available at the other two San Diego A&Fs. She confirmed these included the 89-cent sales and 40-percent discounts the managerial mannered guy mentioned a day earlier. Then she said something surprising. The Horton Plaza A&F is a “tourist store.” “Tourist store?” I asked. “I was in there yesterday, and someone else told me yours is a ‘test store’” She reaffirmed: ”No, we’re a tourist store.”

Good Lord, could I have misheard the managerial mannered guy saying test when he meant tourist? Unlikely. Firstly, he rebuffed my initial question about price difference by explaining the Horton Plaza shop didn’t support the 89-cent sales or 40-percent discounts. The sweatpants were discounted 20 percent. Secondly, he explicitly said A&F Horton Plaza sold items at full price to test whether people would pay, and he emphasized when discounts were available at other Abercrombie & Fitch stores. I didn’t ask; he volunteered the comparison.

Test or tourist is the same: People shopping at Abercrombie & Fitch Horton Plaza generally pay more for clothes and accessories than other local shops in the chain. The employee I spoke with tonight did explain that items could be taken to the Fashion Valley store within 15 days for refund on the price difference. Yeah, but how many people are going to know to do that or suspect pricing is different?

In strangest coincidence, Abercrombie & Fitch was in the news today. A Forbes commentary asserted: “Abercrombie CEO Unloads ANF Shares, So Should You.” CEO Michael Jefferies “intends to sell as much as 1.79 million of his shares,” Ned Douthat writes. “At current market value, a sale of that magnitude would net him nearly $63 million pretax.” Just days ago, A&F revealed plans to shutter 110 stores by end 2011—60 this year. Oh my, that Horton Plaza store pricing test perhaps really is important. 🙂

Do you have a retail story that you’d like told? Please email Joe Wilcox: joewilcox at gmail dot com.