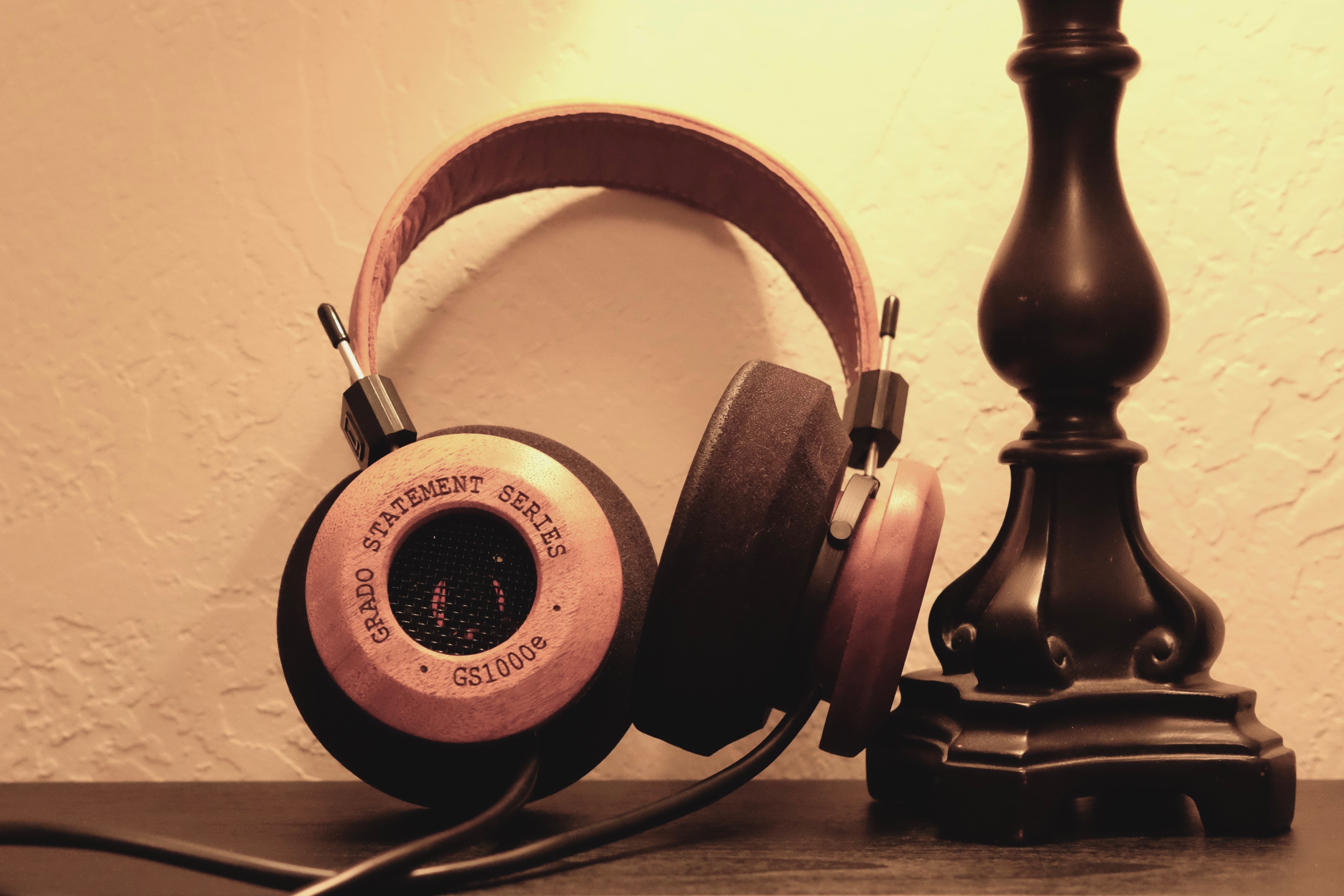 After Grado Labs shipped to me the GS1000e headphones, but before they arrived, I realized my mistake. Big sound comes in matching size. So used to the Brooklyn-based company’s signature on-ear designs, I somehow overlooked that the pricey Statement Series audiophile cans are over-ear and overly large. It’s all about the earcups and pads. The RS1e, which I previously owned and sold, measure 17 x 8 x 19 cm (6.69 x 3.15 x 7.48 inches). The GS1000e: 23.11 x 8.89 x 23.88 cm (9.1 x 3.5 x 9.4 inches). As I feared, the Grados look enormous on my head, unbecoming. But, Hell, I accept the indignity of a big slab of iPhone against my face—why fuss?

Size isn’t the only difference from other Grados. I don’t hear the classic audio signature, but something else. Something better. Out of the box, with no burn-in, sound is smooth, expansive, and detailed. Well-rounded. Finely balanced. The open-air, over-ear styling truly is circumaural, spreading soundstage in placement you can close your eyes and see. Feel. There is an audio authenticity unlike any other headphones ever to touch (or cover) my ears—and that’s with less than 10 hours use. Cans like these improve with age; burn-in is everything.

Big Sound
Open-air headphones typically give the most realistic soundstage, but they also let in and leak out sound. I don’t mind. It’s more natural to hear the surrounding environment, like you might at a live concert or other musical performance. The GS1000e present so much discerned detail that any latent noise coming in adds to, rather than subtracts from, the listening experience. The tight, insular soundstage of closed-back or noise-cancellation headphones is unnatural, contrastingly.

The GS1000e are open-air like I’ve never used. Vocals are so sharp, musical instrumentation is so crisp across the tonal range, I must listen with the volume cranked way down low. For example, on iPad Pro 7.9, that’s one to two notches on the volume bar (by my count there are 16).

The experience is almost painful when listening to Master recordings streamed from Tidal. They’re 96 kHz / 24-bit compared to 44.1 kHz /16-bit for the service’s FLAC (Free Lossless Audio Codec) tracks. If volume isn’t fairly low, I feel a tickle in my ear canals, and my eardrums might later ache. That’s good. Seriously. Lower volume is better for long-term hearing health. Too many people crank up to hear more detail from the mush that low-bitrate compression creates. That said, the GS1000e add dimension to 256kbps AAC and 320kbps MP3 recordings, in my limited listening. Tidal tracks literally sing symphonies, by comparison.

Big Change
In October 2016, I sold my Grado RS1e purchased in July 2014, in a lifestyle change to wireless and Bluetooth audiophile Master & Dynamic MW60, which design also is over-ear. I nearly kept the Reference Series headphones and later regretted parting with them—more so when Tidal debuted Master recordings earlier this month. I ordered the Statement Series cans four days later (January 9th), and two before my 95 year-old father-in-law died; he lived one block away, and we closed out his apartment yesterday. The headphones arrived on the 16th; obvious circumstances have limited listening.

Selling the RS1e and then acquiring another pair at a loss made no sense to me. Enter the GS1000e as alternative—not that I could find much in the way of professional or consumer listener reviews to guide my decision. The most useful: Ryan Clarin’s take on the original set, from January 2007 (I know, I know). Carroll Moore’s GS2000e review, from May 2016, helped some, too, along with Amazon verified customer reviews and user posts from audio forums. The vacuum of reliable information prompts me to write this first-take about the Grados and perhaps a full review after 100 hours or so burn-in. I wonder if, for example, lows will be more pronounced with age (I hope not, as they sound plenty punchy and balanced to my ears straight outta the box).

Differences between the two headphones are notable. The GS1000e are immensely more comfortable—cozy, in fact. While soundstage is best of class on both cans, it’s considerably more expansive and dimensional on the Statement Series than the RS1e. Again, judging by limited burn-in, there’s a roundness to the GS1000e that I can’t describe by comparison. Vocals are a tad crisper and more detail can be heard, particularly among higher tonal instruments. That said, the RS1e are fantastic audiophile cans, and their considerably lower cost is important purchase consideration. Maybe if I could go back in time, I wouldn’t sell them. But in the present, the GS1000e are a delight, and I am adjusting to their size—like I did 5-inch-plus screen smartphones. I should make more mistakes like the GS1000e. 🙂