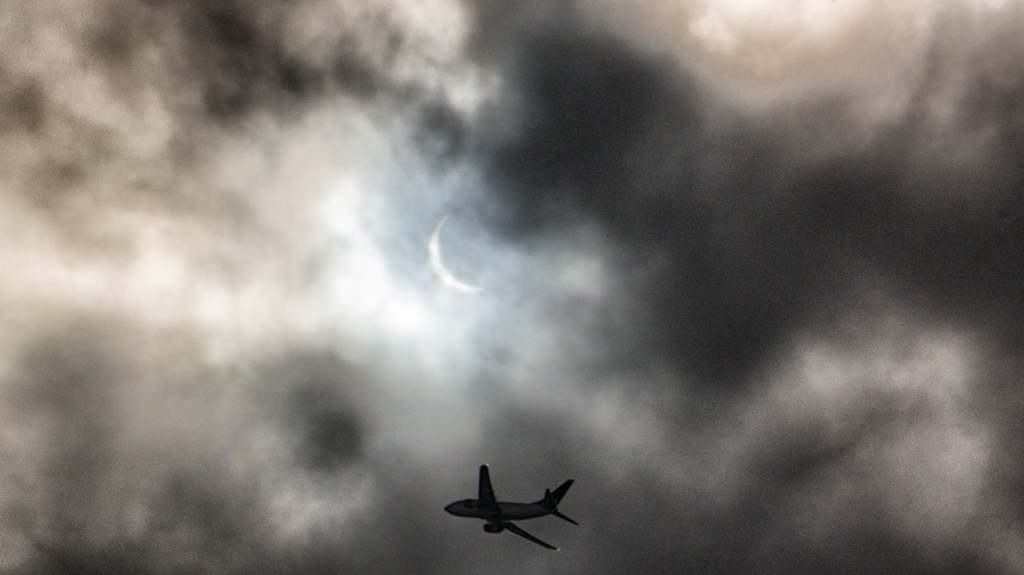 Earth, Moon, and Sun ushered in the Spring Equinox with a real treat yesterday: A solar eclipse—total off the coasts of Greenland and Scotland, cutting a broad partial path across Northern Europe to areas of Asia and Africa. The Guardian’s primer is must-read, for a quick study of the science and explanation about this specific, rare astronomical event.

Today’s selection, showing near-totality as seen from Bodø, Norway, is bit of a compromise. The image doesn’t demonstrate the best work of photographer Trond Kristiansen, whose Northern landscapes are stark but magnificent. There’s an other-worldliness to them. The posted pic’s resolution is lower than typically appears in this series, which is another compromise.

I chose self-titled “Solar Eclipse” for the composition—airliner rising before the shrinking sun—and because the photo is one of only a few I found licensed “Some Rights Reserved”. Reminder: This series only features work made available under a Creative Commons license.

Trond, who joined Flickr in January 2006, is from Bodø, which is located just north of the Arctic Circle. Perhaps that’s why I feel chill gazing upon his landscapes. After you look through his delightful photostream, feast your eyes on Flickr group “Solar Eclipse—March 2015“.