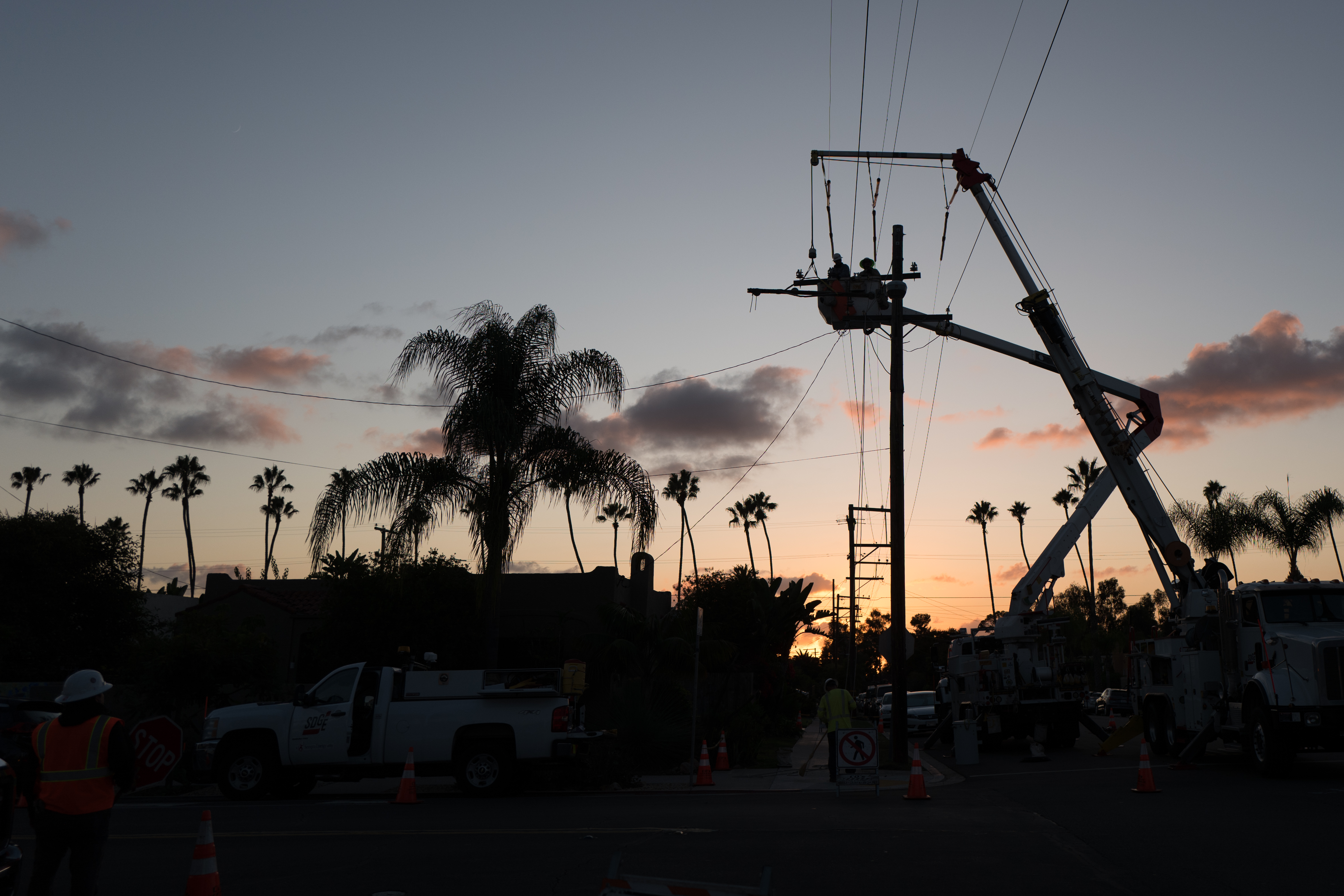 They say timing is everything—good for comedy, bad for anything else. Yesterday, 10 minutes into recording a scheduled 2 p.m. PDT podcast, where I was the guest, the tone of palm tree-cutting/pruning outside changed from steadily annoying roaring to pitching alarming grinding. Simultaneously, and in near-perfect rhythm,  the lamp light by my desk started flickering. “Uh-oh”, I thought. “Somebody nicked a power cable”.

Skype skidded to a stop, as the electrical disruption reset the AT&T U-verse modem, which could no longer get enough juice to function. The lamp stayed on but dimly. Major appliances, the refrigerator being principal among them, went off. Out on the street, overly-excited neighbors blabbered so loudly that their combined voices matched the decibel range of the now silenced tree cutter. I had already worried that the sawing would become unwanted ambient background noise on the recording. Ugh, now this.

Finally realizing that the brownout wouldn’t go away soon—and might become a blackout (which it did)—I turned on the iPhone 7 Plus Personal Hotspot, changed the MacBook Pro WiFi network, and Skyped-back the host. I was a last-minute guest, so how could he complain? He usually comes to me when he has nobody else. I am his—what’s that other four-letter word for intercourse—talk buddy. When we wrapped up, about 55 minutes later, I walked outside to see the drama that had unfolded; by this time, our appliances and gadgets had become electrical orphans. Brown faded to black.

The tree-cutting was close-by, near an intersection, and that explained why the sawing sounded like it could be in the apartment. Neighbors—none of whom I had ever met, because they walked over from several streets away—gawked at the scene before them: Several utility vehicles and one fire truck blocked the four-way in all directions. Sure enough, one of three clustered power cables had been damaged; when I asked, no one knew the fate of the brave-the-heights utility worker, nor did they seem to want to. Eek! 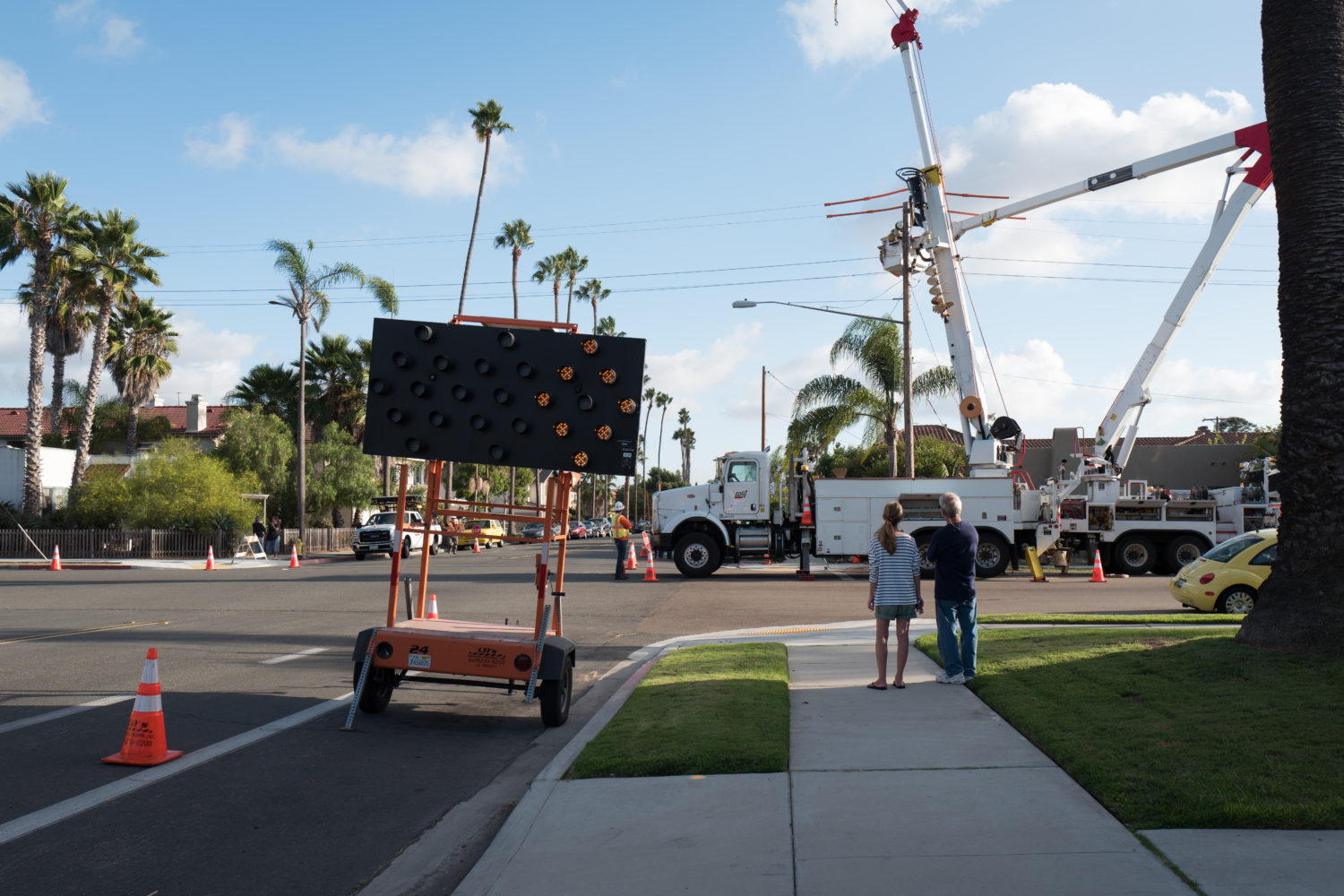 Not long later, my wife and I left the scene; the localized power outage was too good the opportunity for an afternoon walkabout. When we returned, she suggested taking photos to preserve the moment, so I sauntered up the stairs to fetch my trusty Leica Q. Snap. Snap.

By this time, our power was restored, but some neighbors said they still had none. The utility crew worked well into the night; total darkness. The Featured Image captures their work exactly at sunset, 6:43 p.m PDT. Vitals, aperture manually set: f/2, ISO 100, 1/2000 sec, 28mm. A second near-identically composed shot is f/5, for which the camera chose 1/200 sec shutter. My picked pic is darker, presenting stronger silhouettes.

I shot the companion photo at 5:27 p.m. PDT—more than three hours after the mishappening and many more before the SDGE crew called it a night. Please click through and look at the image full-size; Leica Q, with its 24-megapixel full-frame sensor and 28mm f/1.7 Summilux lens, captures crisp detail. Vitals, aperture manually set: f/5.6, ISO 100, 1/320 sec, 28mm.

Wryly ironic, that morning, Anne and I finished personal disaster preparations, following several fervent days of planning and procuring. Hurricanes Harvey, Irma, and Maria, the Mexico City earthquakes, and threat of thermonuclear war with North Korea are all reasons to finally prepare for the worst. Our kit includes fresh batteries, solar panel capable of charging a laptop, and a few days provisions. Apartment-dwelling creates some limitations. But, hey, had the power been out for much longer, we would have managed satisfactorily.