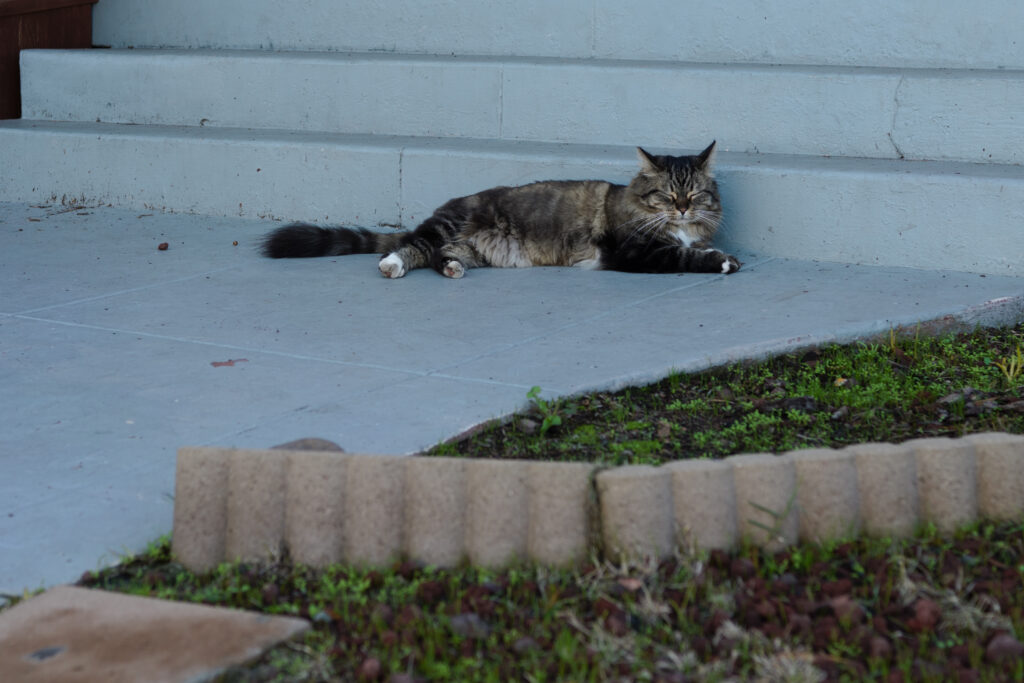 As my wife and I walked along Monroe today, a voice called from behind: “Hey, there’s something I have to tell you about Bruce“—not an exact quote but the gist is right. She approached, with her dog leashed and the tabby trotting behind. He was profiled for my “Cats of University Heights” series in May 2017.

Three days ago, someone came pounding frantically on her door, agitated: “Something happened to Bruce”. The tiger tabby likes to hang out and watch the kids at a nearby daycare, and he had stretched out on the sidewalk waiting for them to come outdoors to play. They didn’t, as the place is temporarily closed—along with most other businesses in the city because of state and county orders that everyone should “stay at home” as a means of slowing spread of SARS-CoV-2 (severe acute respiratory syndrome Coronavirus 2), better known as COVID-19.

A car pulled up, with four people inside; two climbed out from the backseat and grabbed Bruce. Small maybe, he’s a street cat and feisty. He scratched and clawed, then wriggled free. The neighbor saw the drama unfold, as Bruce ran across the top of the vehicle, leaped into the street, and ran off. He escaped!

As Bruce’s mom heard the grim story and set off to find him, another neighbor appeared from around the corner—breathless and concerned. Pregnant and pushing a baby carriage, she knew whereabouts the cat lived but not the actual residence. She had circled the block three times trying to find his home. “Not that way”. The lady told Bruce’s owner that the cat hadn’t fled where she was about to go. He’d run off in an unexpected direction.

Four blocks away, nearby an auto repair shop, she found Bruce, who leaped into her arms and clung to her torso all the way home.

Is the timing coincidental to something else, or worse? The following day, someone living about eight blocks away in North Park revealed on Nextdoor discovery of a sacrificed dog “surrounded by a huge pentagram”—in a “vacant unit right next door to my place”. Say what? Other neighbors confirmed the story in additional postings on the social network, adding that animal control later canvassed the area asking if anyone living there had seen anything, or anyone, suspicious or out of place.

What end might Bruce have come to? Perhaps nothing like that, but I wonder whether or not the incident is isolated—such as bored bad behavior by high school or college students stuck inside where they live with all educational institutions closed and classes moved online during the SARS-CoV-2 lockdown. If not isolated, his near abduction might explain a recent rash of missing cats, including Mr. Kitty, that I attributed to coyotes.

Bruce is safe for now, and his mom is among the many millions suddenly fired or furloughed because businesses are temporarily (we hope) shuttered. She expects to return to her job, but her employer doesn’t think before end of June. Her presence means Bruce will stay indoors more, but not all day. He’s a roamer. Let’s hope the criminals don’t return looking for him, or another of the neighborhood’s fine felines.