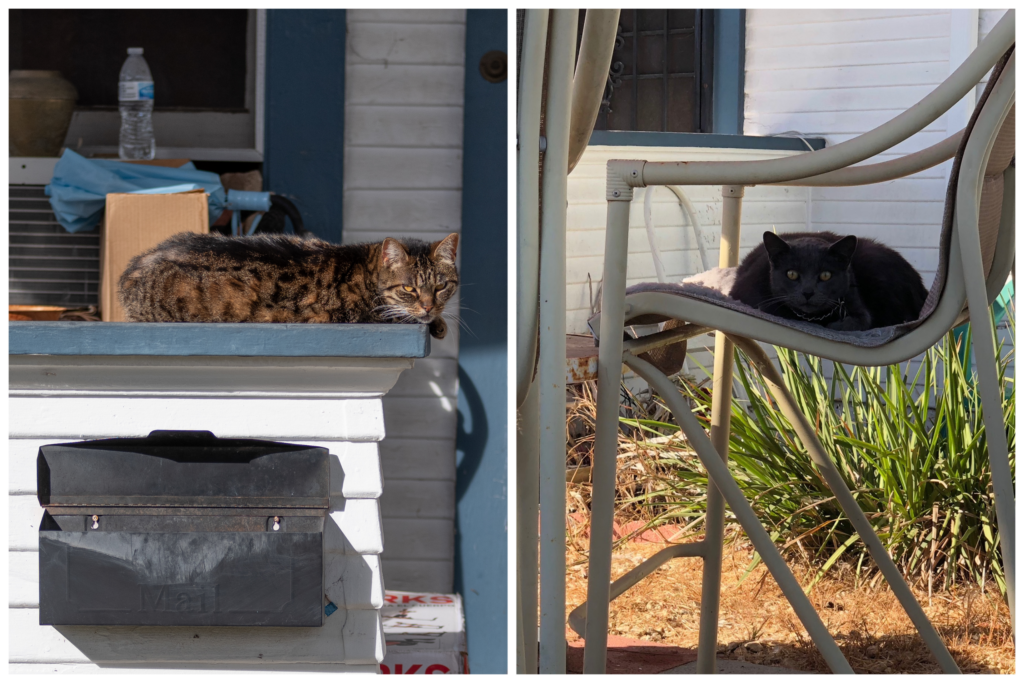 In February 2019, a gent moved from my neighborhood to Arizona, abandoning his two outdoor cats and goldfish. (He did take the dog!) The perennial renter of 17 years left behind a ramshackle residence for his landlord to sell and animals for the real estate agent to dispatch. She should be thanked for taking responsibility for them.

I was quite familiar with the kitties—Lupe and Laramie—which had been profiled in my “Cats of University Heights” series. The realtor trapped the pair, and my wife and I helped care for them until the fine folks from Rescue House took them away. For the full saga, please see “Lupe’s Last Day“. Periodically, I checked the RH website, only to be disappointed that nobody had taken them. Eleven months passed before the two would finally be adopted. Together!

On March 31, 2020, the RH volunteer texted a full update. The content is shared with her permission, and I have changed the new owners’ names out of respect for their privacy. She expresses, with satisfaction, the wise decision not to separate the bonded pair: “It was a long haul for these two. They were in foster care for most of their time with us. It was worth the wait, because they found their perfect forever home”.

Who are they? “The adopters live alone and have no other pets. [Jack] works from home and [Jill] is currently working at home, too”.

I suspect that this is new job life for Jill; companies that haven’t furloughed or fired staff have asked employees to work from home. The SARS-CoV-2 (severe acute respiratory syndrome Coronavirus 2)—also known as COVID-19—pandemic is an inescapable global reality. Most states, including California, have ordered the majority of businesses and all schools to close their doors. Lupe and Laramie were lucky to be placed weeks before the lockdown put the kibosh on adoptions.

I have spoken with [Jill] on a couple of occasions. The first time was about two weeks after the cats went home. They were still shy—though eating well and using the litter box without any problems. But they were shedding a lot, and that was probably due to stress—you will remember that it happened when they were at the adoption center.

They spent the first week in the guest room and had a fleece blanket which they loved. Slowly, doors were opened and they were allowed to explore at will, retreating back into their safe room whenever anything startled them. [Jack] is a musician and the ‘noise’ of his music was intimidating. That has disappeared now.

Lupe was the first to make it downstairs. She is the more adventurous of the two. Larry (as Laramie is now called) is the more timid, and he still retreats under the bed when he’s feeling tired and wants to take a nap or when he is startled. But he goes downstairs every morning—waiting for [Jill] at the top of the stairs in eager anticipation of his breakfast. He’s a good eater! It was the decision to feed them downstairs that convinced Larry to descend.

I decided not to tell her that Larry is the name of the man who abandoned the pair. How strange the coincidence, huh? More:

They have now explored every nook and cranny of the house according to [Jill]. But they are still startled by noises—to the disappointment of [Jack]—because his more heavy footsteps sometimes causes them to hide. [Jill] calls Larry ‘Larry, Larry, quite contrary’ because he isn’t sure of himself and will run and hide.

But both cats use [Jill] as a mattress and sleep on her. They will purr contentedly if quietly petted. While I was speaking with [Jill] today, Lupe was lying on [Jack’s] poncho and looking out the window, which was slightly opened so she could hear as well as see the birds in the [yard]. I couldn’t hear her purring but [Jill] assured me that Lupe was making lots of noise as she was petting her.

They understand that Larry and Lupe have PTSD and it will take awhile for them to realize that this is their forever, safe home. ‘That’s OK’, says [Jill], ‘we have all the time in the world’.

Both cats were mostly outdoor roamers before being left behind. Now they are companions to Jack and Jill as well as to each other. For nearly a year, I worried that this story wouldn’t have a happy ending. But it is, at last.

I used Adobe Sparkle to create the Featured Image of Lupe (left) and Laramie.