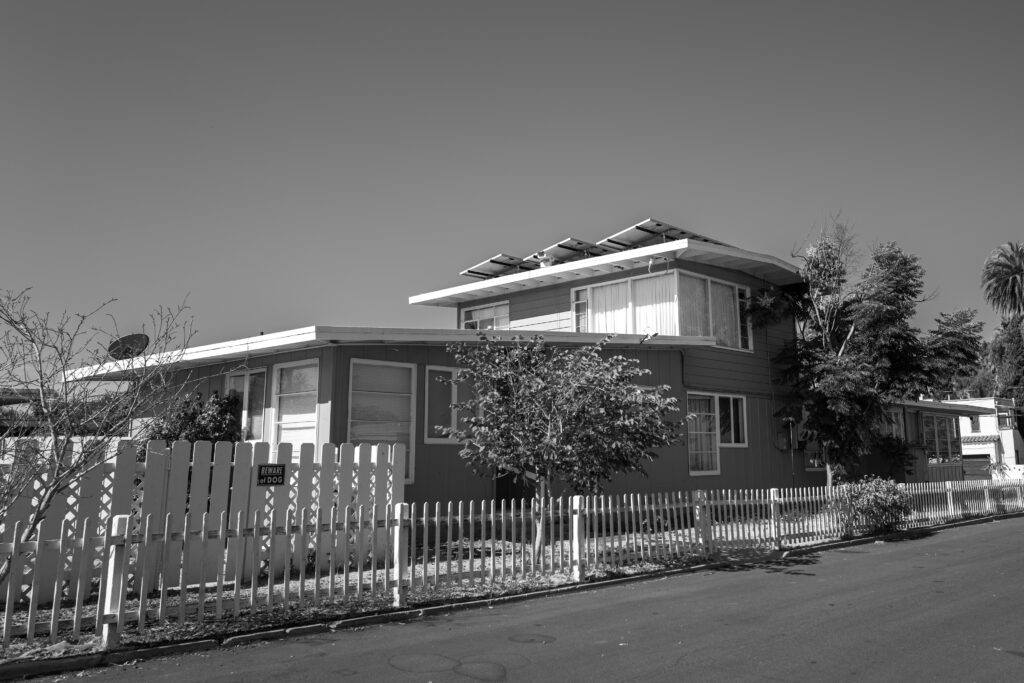 Be not fooled. We live in a surveillance society. I am not paranoid, nor even freaked by this startling situation. I merely take for granted that someone, somewhere, is watching—perhaps from a business’ security camera, household door webcam, or citizen’s smartphone.

Occasionally, though, surveillance severity surprises me. And I wonder: From what is the watcher afraid—or, worse, what is he or she hiding? The Featured Image is one example. I frequently walk by this house and marvel because the windows are so appealing but typically blocked by blinds or curtains. Who lives in such darkness? Vampires? On Aug. 18, 2020 something else rapped my attention—and I can’t say whether or not newly added. Look at those industrial-size security cameras. Yikes!

But more surprising, beneath the solar panels, is a camera that points down the street; not onto the property. The homeowner(s), or whomever resides there, surveils the approaching public throughway, which could capture more identifying stills/videos of pedestrians than vehicles. There is some foot traffic, for sure; for example, within walking distance is the Point, where I once photographed kitten STAR for my “Cats of University Heights” series.

Perhaps the cameras have been there and I only observed them three days ago. They also might be recent additions—someone’s touch of paranoia mixed with realism. Increasing homeless population living in the nearby canyons, recent racial riots across America, and uncertain anarchists’ reactions to the U.S. Presidential election should make any homeowner cautious enough to take precautions—the solar panels being another. The folks living inside that house should have electricity in the event of catastrophic collapse of the power grid and ample perspective of anyone approaching from the streets.

Got to wonder: Do they practice their Second Amendment rights? Be warned: Don’t judge a home by its unassuming exterior; the folks inside may be well-armed and ready to defend their domicile. I hope that they never need to. But it’s better that they—and you, honestly—be prepared in these ever-uncertain times. Eh?