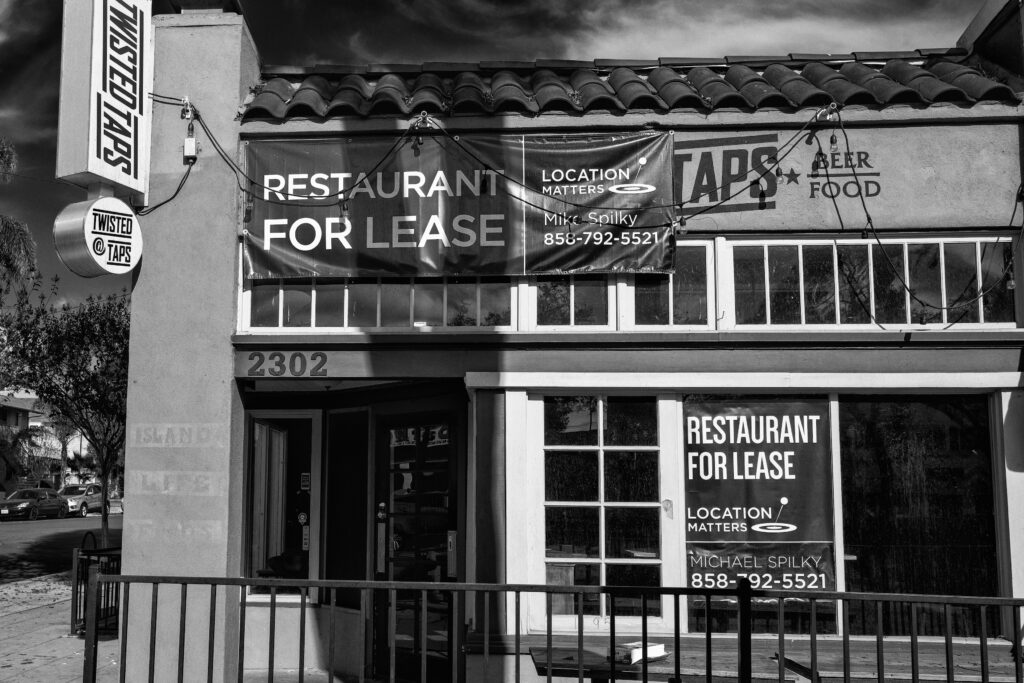 For a state top-heavy with liberal-leaning Climate Change crazies cruising electric cars and demanding the end of carbon emissions, California sure loves coal—as in stuffed by the truckloads into Christmas stockings. Governor Gavin “Grinch” Newsom assures plenty of blackened lumps this holiday, following his most recent order that effectively shuts down most of California and demands that citizens stay home and embark on nothing more than “essential travel”; how odd that trips for alcohol and cannabis are allowed, although I’d like to think that Santa regards them as naughty and worthy of a sack of curbside coal—seeing as how the lockdown order permits deliveries but forbids visits from the likes of Old Saint Nick.

Today marks the first full day of shutdown misery, which will last until at least Dec. 27, 2020. Driving through Ocean Beach this morning, I was struck by how many eateries and pubs had set up outdoor dining areas—some costing tens of thousands of dollars to construct. Now they’re useless monuments to COVID-19, colossal wastes of capital, and resounding lessons that trying to do the right thing for public health is the wrong approach when Governor Newssolini keeps changing the rules by which businesses operate during the pandemic.

Closed Forever
In this County, SanDiegoVille keeps a running list of restaurants and pubs permanently shuttered during 2020—the majority since the pandemic’s start. I count 111 entities, but more when accounting for establishments with multiple locations.

The tally is incomplete; I know because Twisted Taps isn’t among the one-eleven. I have infrequently walked by the Hawaiian eatery and bar on El Cajon Blvd. in University Heights. On December 5, I observed the establishment to be totally vacant and the space for rent (good luck with that). I captured the Featured Image, using Leica Q2, and moved along. Vitals, aperture manually set: f/5.6, ISO 100, 1/500 sec, 28mm; 10:35 a.m. PST.

During post production I applied, from Nik Collection Silver Efex Pro 2, the Wet Rocks filter, which turned light cloud cover into a threatening storm that appropriately captures the dread looming over small businesses across the country.

Two Counties Compared
One of my sisters lives in Florida. Yesterday, during a phone call, I attempted to express how locked down is California and the expectation that the governor’s grip will tighten. Wanting to understand the mood there and how loose (or tight) things are, I asked her. She glibly answered: “Tomorrow I’m going to Disney”. Ha! In Cali, Disneyland is closed and unlikely to open for many, many, many more months. 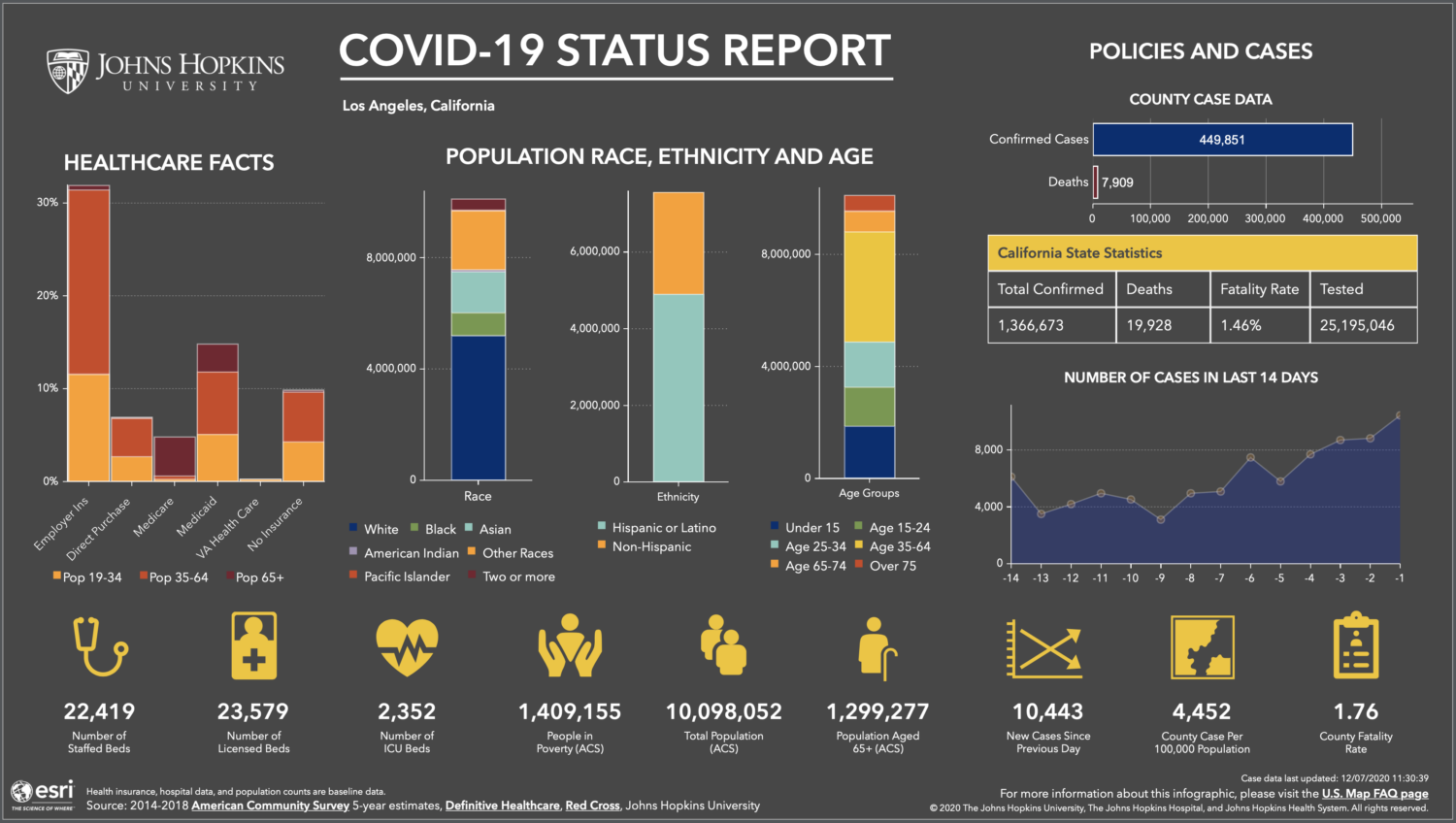 Florida is mostly open for business, while California is largely closed. Who has the better public policy? According to the John Hopkins University COVID-19 tracker, nationwide, Los Angeles and Miami-Dade counties rank first and third, respectively, for number of confirmed Coronavirus cases (to be clear that really means infections). Climate is warmer in both regions than is typical around the country: strange, speculation among so-called health experts speaking to journalists is a surge instead in cooler regions as winter starts. Florida takes more an approach of providing guidance and trusting citizens to act responsibly. California imposes orders to compel behavioral adaptations. 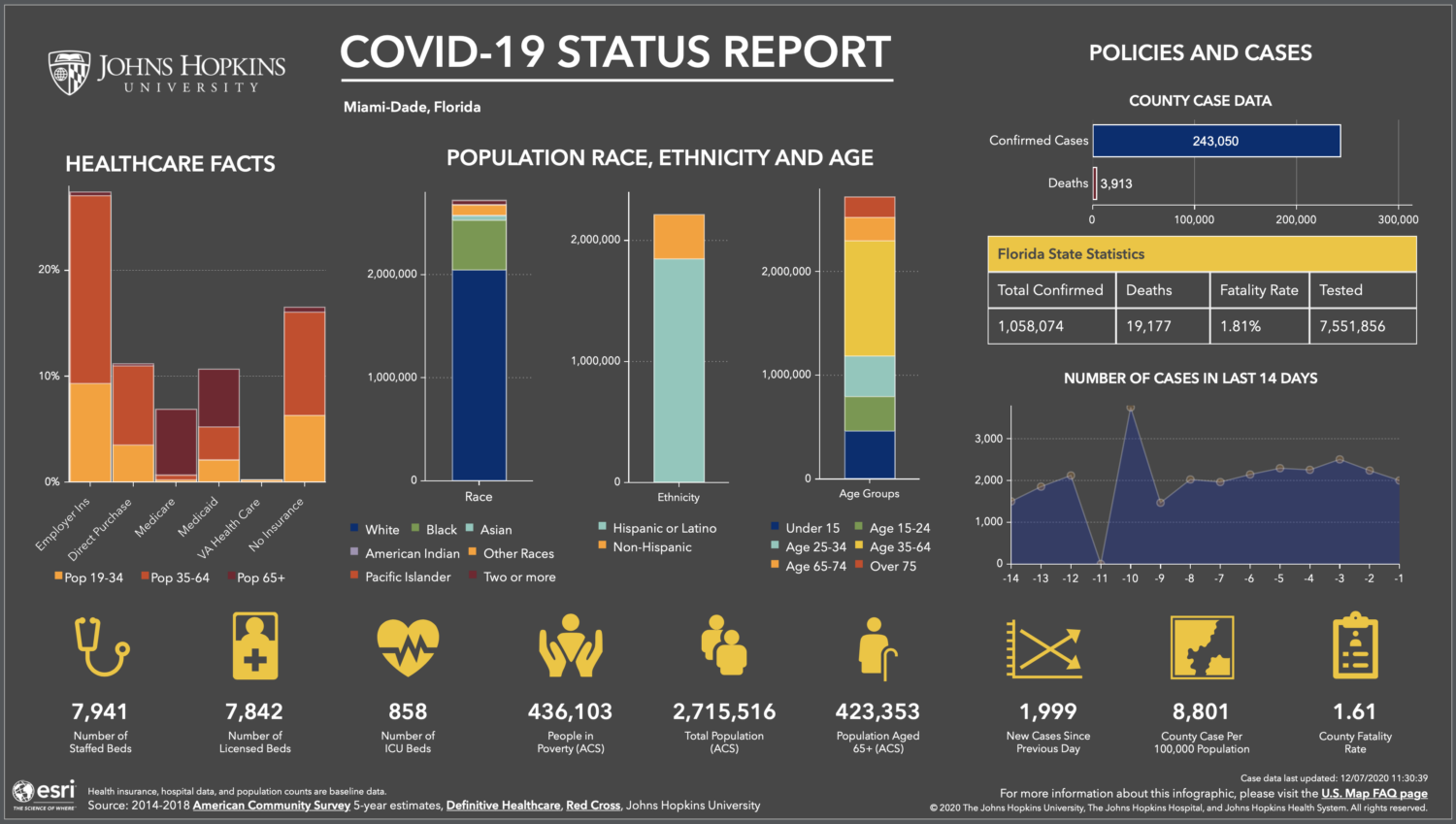 Despite contrasting approaches, the fundamental COVID-19 stats aren’t that dissimilar. For example, according to John Hopkins University, case fatality rate is slightly lower in Miami-Dade compared to LA: 1.61 percent versus 1.76 percent. However, California’s CFR is lower than Florida’s: 1.46 percent to 1.81 percent. Population of the high-risk 65-plus age group is one explanation: 15.6 percent (Miami-Dade); 12.87 percent (Los Angeles). While the Florida county has more cases per 100,000 (8,801 vs 4,452), their number is going down, while steeply soaring in LA (see both screenshot charts).

Is there a takeaway here? The question to ask: Is California’s lockdown justified and necessary? You tell me.