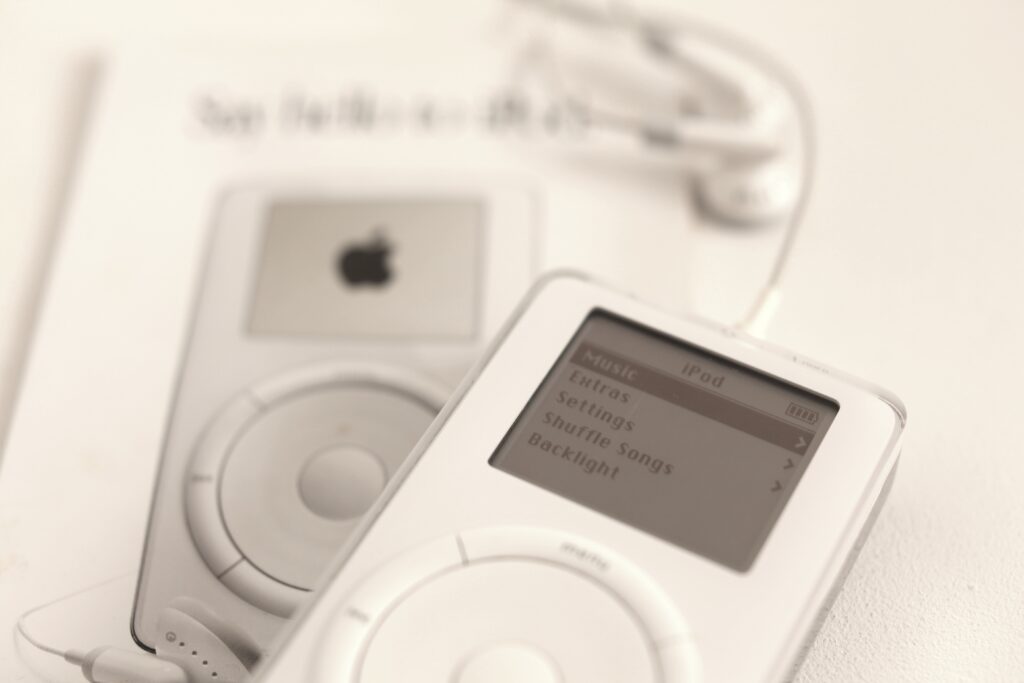 Foundation Building
As I have explained many times—primarily here and here—four 2001 products are foundational to the fruit-logo company’s later success with iPhone and everything that followed it. The other three: iTunes, Mac OS X, and Apple Store. For the future smartphone, iPod is most import of the quadruple—although all greatly contribute.

The digital music player’s eventual sales success led Apple to open more stores and, more importantly, improve manufacturing and distribution logistics and supporting marketing. Many of the supplier logistics and contracts crucial to launching iPhone, and expanding global sales,  evolved from iPod. The company likely wouldn’t exist as anyone knows it today if not for those four products—and iPod principle among them.

Snippet of success: During holiday quarter 2004, Apple sold 4.58 million iPods, bringing the total since sales started three years earlier to 10 million. The device accounted for 35 percent of total revenues during the three months.

The Introduction
I met with Apple’s PR team in a Washington, D.C. hotel for an official briefing soon after the 5GB music player launched. I received a review unit and bag of (20) CDs—as Apple discouraged music theft but wanted journalists to get the full user experience.

While then-Apple CEO Steve Jobs touted the big benefit as “1,000 songs in your pocket” something else mattered more to me: Simplicity. iPod wasn’t the first portable music player to market; many others were available. But from my product testing they all shared in common the same design flaw: Complexity, with the worst of it syncing music between a PC (typically running Windows) to the device.

By contrast, iPod was plug and play—quite literally. To this day I recall the surprise after connecting the device to my Mac. With iTunes open, songs started transferring. No confusing prompts or multi-step Wizards. During the few years when leaving journalism and acting as an industry analyst, I counseled companies: The light switch is the hallmark of good design. The user interface shouldn’t be more complicated than that.

Apple has strayed from the simplicity design ethic over the last two decades but also returned to it. The recent experience setting up iPhone 13 Pro oh-so reminded me of the original iPod. The process offered two automatic options: iCloud Backup or another iPhone. I chose the latter, which amazed. Bringing the two smartphones together prompted the transfer, which commenced with a QR code on the 13 Pro screen being read by the camera on my XS. Everything synched, including passwords and all settings. The experience was exceptionally good and the process flawless.

Metaphor for Risk
The original 5GB music player excited enthusiasts but initially not the mainstream market. One reason: Early on, the device only worked with Macs, which install base was tiny compared to Windows PCs 20 years ago. Success wouldn’t really come until the release of iPod mini in 2004.

I used the original-style iPod, which gained the “Classic” moniker with the sixth-generation release, until Jobs unveiled the iPod nano. The first iPod nano, for which some griped easily scratched, is to this day my favorite music player. The device was finely-balanced, felt and looked good, and delivered superb UX. Every nano that followed took something away from the original’s understated design.

In many respects, the diminutive music player showcases the company cofounder’s risk-taking leadership style. During the Sept. 7, 2005 unveiling, Jobs boasted: “The iPod mini is what all of our competitors have their sights focused on. We’re going to do something pretty bold. Today, we’re gonna replace it”. He went on to name the new iPod nano, then asked for a video camera to close-up on his jeans, and, pointing to the coin pouch, asked: “Ever wonder what this pocket is for? I’ve always wondered that”. He pulled out the nano.

Under Jobs’ stewardship, Apple did something unthinkable, by so blatantly defying the rules of retail: Killing off a product at the height of popularity, what was then the most purchased portable music player in the world. Just as competitors started shipping iPod mini knock-offs to stores for the holidays, Apple made their devices suddenly obsolete—bricks, by comparison. For all the cleverness of nano’s design, there was greater innovation from a product marketing perspective. The little music player was a giant middle finger lifted towards iPod mini imitators.