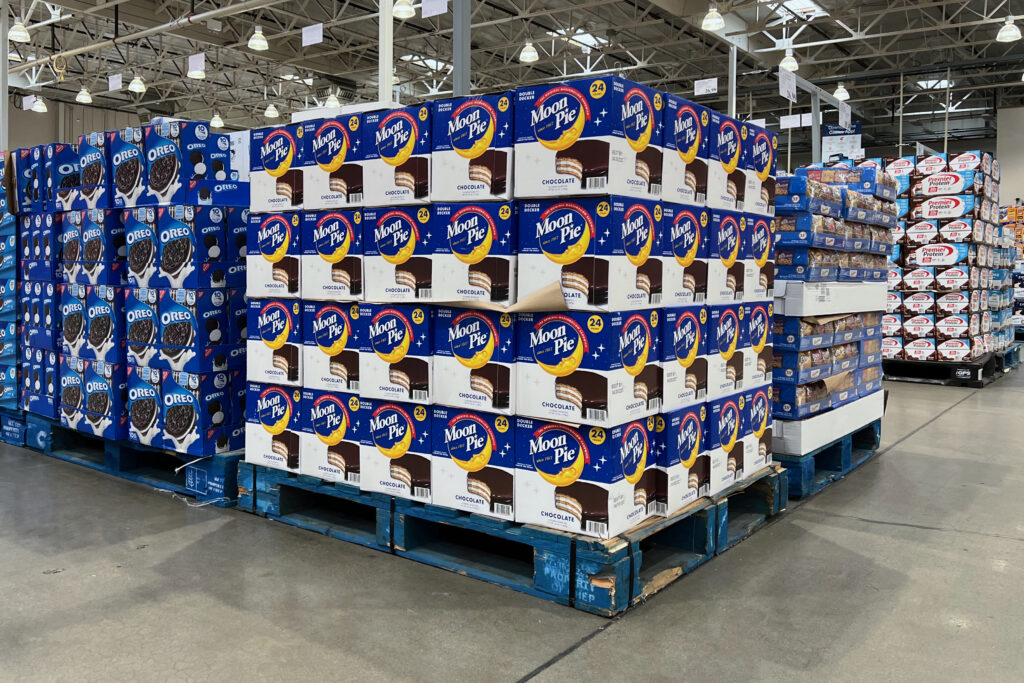 Go ahead and scold me for this being one of the most pointless of posts. But before changing my diet in July 2013—foresaking all confections  and largely reducing processed carbohydrates—MoonPie was among my top choices for cheap treats (I couldn’t find Devil Dogs outside the Northeast United States).

My wife and I passed by a massive display of the Double-Decker variety, in boxes of 24, for $9.49—that’s 39.5 cents each—at Costco Business Center today. Best price for the same thing from Amazon sellers: $23.79. That’s a helluva markup, if Costco’s considered more wholesale.

Cooking history is outside my field of general knowledge. But from the most basic ingredients—chocolate, graham, and marshmallow—MoonPies share some similarities with S’mores. And the creation of both occurred in relatively close time proximity—1917 for the one and during the 1920s for the other. What in the U.S. is better known as Mallomars predates both—and I chomped those, being produced in nearby Canada, when growing up in Northern Maine. Consider MoonPie a substitute for ingredients that can’t compare for composition, particularly with the Canadian Whippet.

All variations of the same basic ingredients share something similar: They could be called choco-covered diabetes cakes. For example, one Double-Decker MoonPie packs 27 grams of sugar, which exceeds the American Heart Association‘s recommended maximum daily amount for women (25 g) and 75-percent of that for men (36 g). Think of a single serving as being equal to eating six-and-a-half teaspoons of sugar.

So while I miss MoonPies, and also Whippets, I don’t long for them beyond nostalgia.