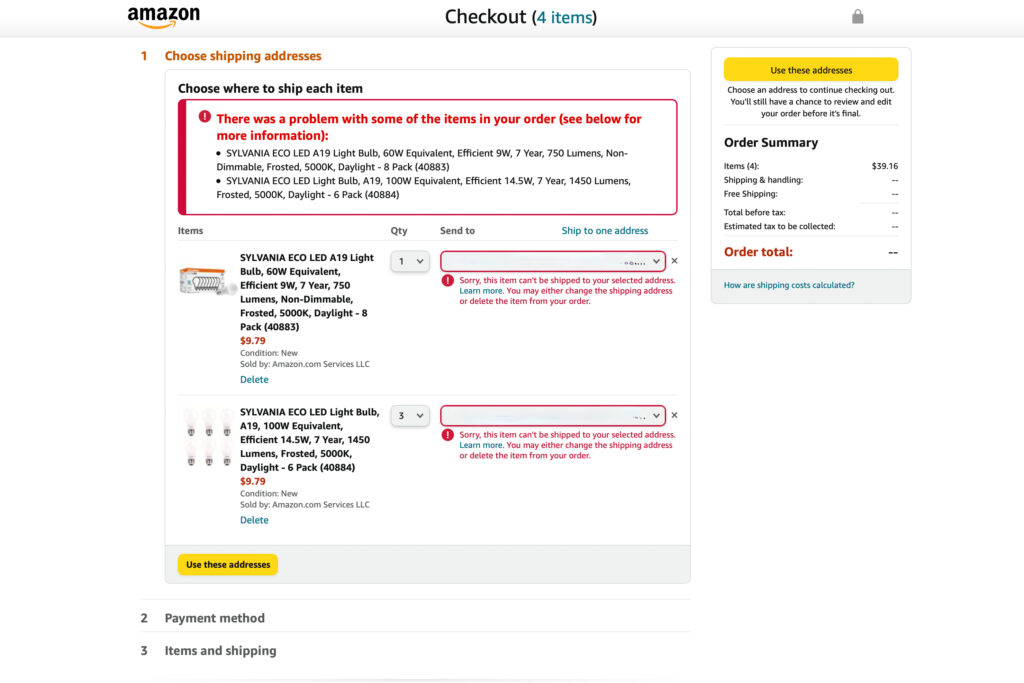 As you can see from the screenshot: “There was a problem with some of the items in your order”. Yeah, like what? For reasons I am unable to quickly ascertain, the Sylvania LEDs do not comply with something California calls Title 20, which with respect to lightbulbs establishes minimums for light-per-watt usage—among other restrictions. The pertinent rule(s) affecting my failed purchase went into effect on Jan. 1, 2020. So tell me then: Why are 5000K LEDs that, according to Amazon, became “first available” on September 20 of the same year, not efficient enough for Communist California? There are 14,752 Amazon reviews, so somebody bought them; 83 percent are five stars. And these Sylvania bulbs aren’t good enough?

I can grudgingly understand regulations that protect citizens from harmful substances, like asbestos and some identified carcinogens. But regulating light? Well, mask mandates are back, topping off nearly two years of Coronavirus lockdowns. So should I be surprised?

In the end, I bought Philips-branded bulbs, after considering alternatives from manufacturers that are completely new to me. Cost is several dollars more per bulb, and if I have to shell out extra the LEDs might as well be close enough to 5000K based on the CRI (Color Rendering Index) and produce no unwanted RF interference or buzzing sound. Based on Amazon reviews (which I don’t really much trust), several of the mystery manufacturers’ bulbs presented problems in these areas.

Chalk up this purchase to the many hidden costs of living in California, with overly-aggressive regulations being front and center. Philips might make a better bulb, but my guess is that Sylvania’s LEDs would have been good enough. If you’re living anywhere other than the so called Golden State, please don’t stop snickering. You’re right to bellow out a condescending chuckle.