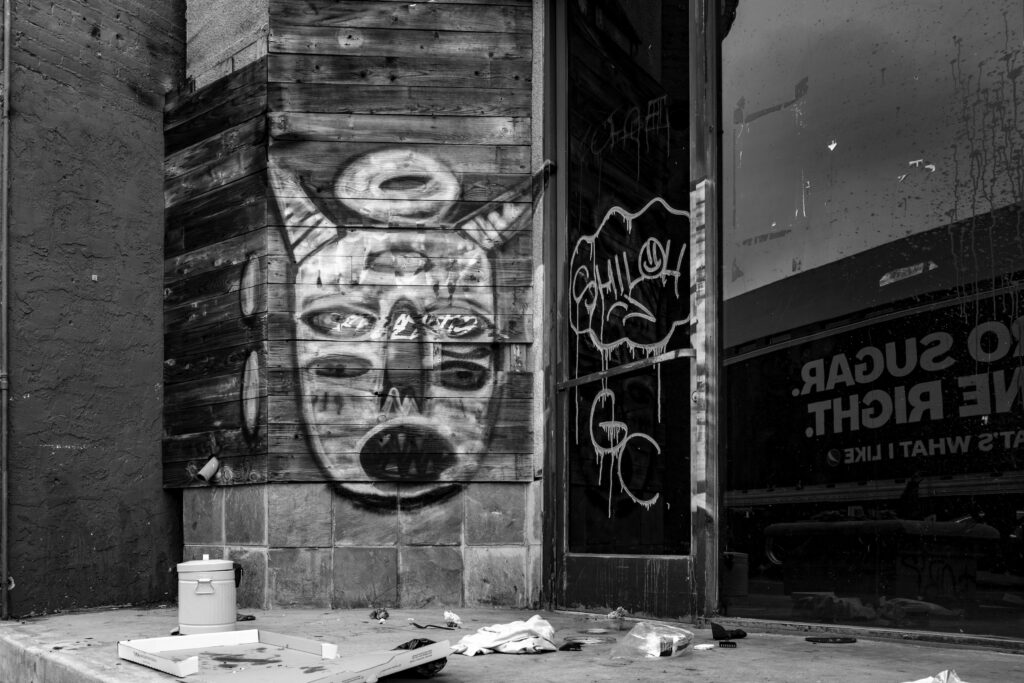 I grit my teeth and put on my persevering personality, whenever need demands walking to neighboring Hillcrest. The atmosphere reeks of hedonism, narcissism, and self-obsession. Physically, the place is dirty, gritty, and seedy—particularly along the main University Avenue corridor and somewhat less Washington Street. The community is considered to be San Diego’s gay district, which couplings confirm and the plethora of rainbow flags or others for various gender identities; fire hydrants, too.

Here’s where someone will accuse me of being homophobic, when I am not: Well-to-do residents who whoop up happy hour and late-night fling fests grimly juxtapose a sizable homeless population. For a community of residents obsessed with all-rights for all genders, the lack of regard—or even sympathy—for people lacking more fundamental rights (life and well-being) is inhumane and, disappointingly, jives with my atmospheric assessment in the previous paragraph. What? Is it liberal values for me but not for thee?

University Heights, where I reside, is by no means a community of saints. I could gripe about problems here (and have done so). But the “my rights for my sexual orientation” crowd is more Hillcrest—and my gripe, stated somewhat differently, is this: why the so-called rights of the prickly-pears who wag fingers of accusation about using the wrong pronouns or uttering deadnames matter more than the livelihoods of what locals call the unhoused. Apparently homeless is an offensive term. Oh, yeah? Help house them; then you can use whatever pronoun(s) your little heart desires—emphasis little and heart.

Let’s talk Featured Image and what it poignantly represents. I came across this grotesque graffiti the day before yesterday along University near either Fifth or Sixth. I can’t even guess what the thing is supposed to be nor really want to know. But let’s say demon or devil, which kind of fits my sentiments about who’s really in charge of Hillcrest.

In many ancient cultures, and probably some modern ones, deity worship involved making food offerings. You can see the remnants—empty containers, plastic fork, and pizza box—scattered before the great street god, who is painted black, white, and grey. The only meaningful color is the light pink of the small flip-lid trash bin. How ironic is its placement, when considering the garbage strewn around it. But, of course, you don’t see pink—or any color—because I used Leica Q2 Monochrom to make the moment. Vitals, aperture manually set: f/5.6, ISO 200, 1/100 sec, 28mm; 10:30 a.m. PDT.

My question: Did deity accept the food offering and was it consumed by some sorry street-living, crusty Cresty or by a “my rights”-thumping narcissist too engrossed with smartphone to bother cleaning up? Hehe, guess!