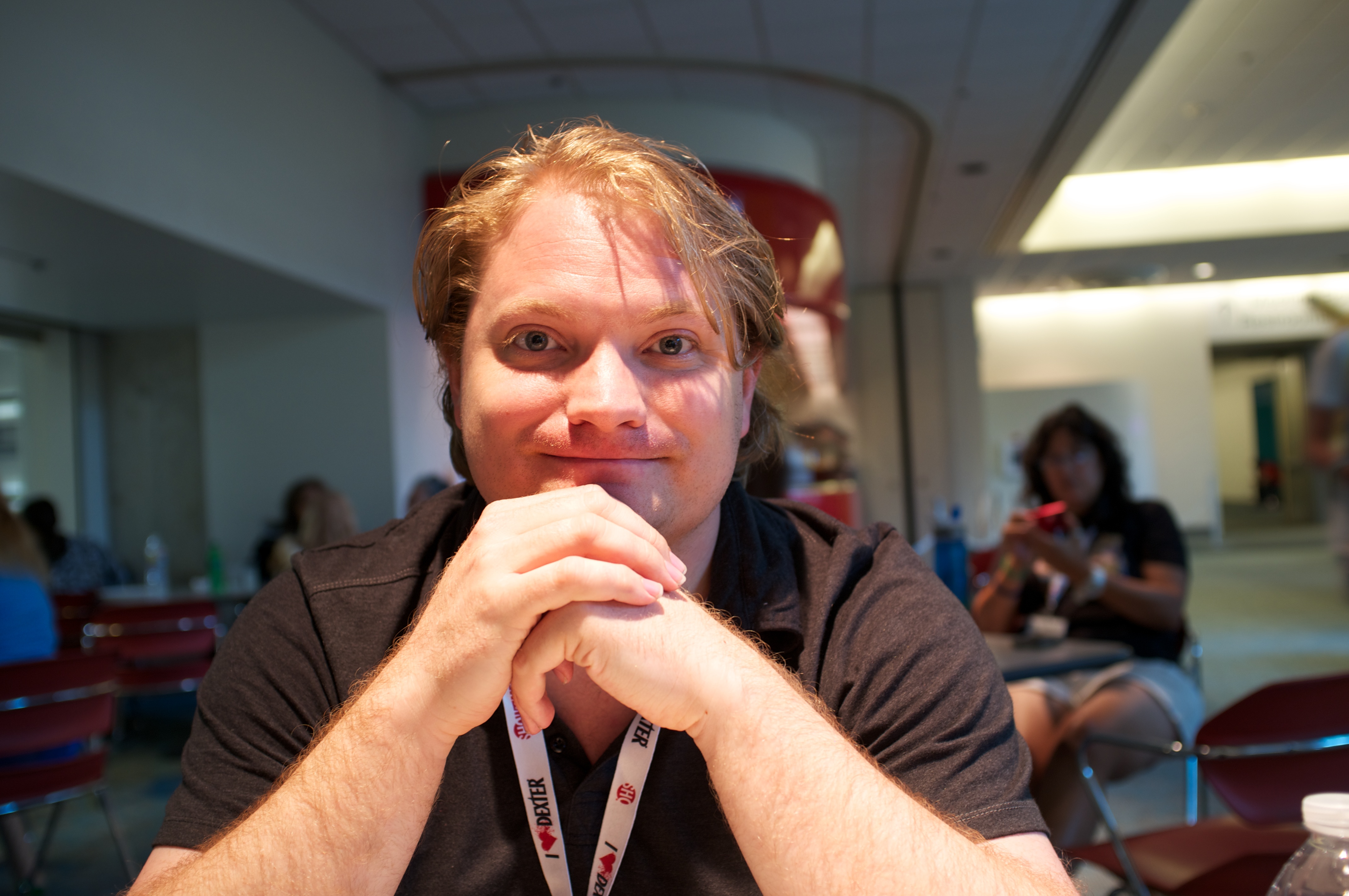 My fourth installment of excerpts from ebook Comic-Con Heroes: The Fans Who Make the Greatest Show on Earth takes an interesting directional shift. So far we’ve met The Dark Knight, Medieval fighter, and twin-brother toy collectors. Would you believe there are people who study toys as a profession? Read on to see.

To recap: I attended San Diego Comic-Con 2013 with intention of profiling one-dozen among the 130,000 attendees. As SDCC 2015 approaches, I am posting 13 installments, after which the book will release into the public domain, on July 8, 2015, when my current commitment for Amazon KDP Select ends.

With that introduction, let’s meet The Academic.

Restaurants are hungry talk. I go to the convention center’s Mezzanine food court looking for burgers but only find over-priced pizza and decide to relax rather than eat. Another attendee and I arrive simultaneously at the same table. He smiles and invites me to sit. With one day’s notice, he got a ticket to the Con, which he visited 30 years earlier as a child and not since. I don’t believe in coincidence—his unexpected attendance and our chance meeting—and casual banter quickly leads me to see we are meant to talk.

“I study the archaeology of toys”, Michael Merriam says, “and I live between Los Angeles and New York”.

Say what? Archaeology of toys?

“I have two ways of looking at the archaeology of toys”, he explains. “One of them is to look at toys in our world today and what they do, how children are actually playing with them and all the documentation around how they’re made and why they look the way they look—without any abstract philosophy about the sexual stuff of plastic, or even social stuff like Barbie is this way to force an idea of femininity on everybody”. In other words, his studies strip away gender-role discussions.

“I try not to do any of that and just look at the sculptural features, as an art historian would look at a sculpture”, Merriam says. “The reason I use archaeology is because I’m using toys from the past [too]. What it really means is it’s a study of how toys work that isn’t distracted by boring questions about commerce or boring questions about women’s roles, men’s roles, or anything like that”.

Merriam describes his profession as “disciplined and rigorous, which is what makes it boring to some people”. Hell, I’m fascinated, listening to him.

How did he come to be an archaeologist of toys?

“This happened because I was studying 20th-Century art and anthropology at the same time, and I noticed that when anthropologists talked about toys they really didn’t talk about the art of making the toys—they didn’t talk about them as sculpture”, Merriam explains. “They didn’t have the same respect for a toy as they would for a statue or a vase. They weren’t interested in their sculptural features, they weren’t really interested in the color they were or anything aesthetic like that. They were more interested in other stuff that was more tangential”.

I smile and think: Who says you can’t make a career out of arts and sciences or majors many college counselors would advise against?

“I took a serious interest in toys, and I noticed that in 20th-Century toys, the imagination of children was being nourished”, Merriam says, “and I wondered if that was true in other parts of history, like the Aztecs or Ancient Egypt. My belief is that it is, and when you study the toys of ancient cultures, as much as we can, it’s possible to find dimensions of life that we didn’t know about”.

I ask for an example, and he gives one a San Diegan can appreciate. “The Aztecs didn’t have the wheel—we always say it as archaeologists, they just didn’t have it—except the children had it. We have children’s toys that have wheels on them. What a remarkable thing that children had this technology, this revolutionary technology, and no one around them was going to take it seriously because it was just in their toys”.

The wheel is a fairly recent invention in human history and often is regarded as a fundamental technological achievement leading to others. However, the wheel’s adoption is rather sporadic from its earliest uses in the 10th Millennium BC. Depictions of wheeled wagons can be dated to around 3500 BC.

More millennia passed before the wheel was widely used for transportation, particularly. Availability of animals to pull wagons or terrain to move them are fundamental reasons. The Roman Empire is example of a civilization that had both. During the 4th Century BC, the Roman Republic constructed the first section of the Appian Way, primarily for military purposes, enabling easy movement of wheeled vehicles. Roads connected much of the future Empire.

While Western Civilization benefited from the wheel’s widespread use, other cultures progressed without it. The Aztecs dominated an area in and around where Mexico City is today. Their principal city, Tenochtitlan, was located on an island in Lake Texcoco. In an area where boats were the most efficient means of transportation, wheeled vehicles weren’t obvious, or even practical, inventions.

“The way their roads were constructed, wheels wouldn’t have been as great as they have been elsewhere”, Merriam says. “So it’s not really fair for me to say that the children caught onto something that silly parents didn’t catch onto”. He smiles.

Surely toys tell some story about the Aztecs. I ask out of interest and connection. San Diego State University collegiate sports teams are the Aztecs.

“What it tells me about the Aztecs as a people, it’s such a good question, because the larger question is what does the cultural life of children tell us about the cultural life of adults”, Merriam says. “The disconnect is staggering. The fact that children lead creative and intellectual lives that their parents and other adults probably can’t understand is breathtaking”.

He veers away from the one culture in Mexico to more universal human tendencies. “A lot of times when you’re looking at children’s toys, you’re seeing the point of severance between children’s and the adult’s worlds”, Merriam says. “Comic-Con is a great way to explore that, because the boundary between adulthood and childhood is porous here; it’s very permeable here in a way that it just isn’t anywhere else in the world.

“When you ask about what’s the difference between the culture of kids and the culture of adults, this is probably the best place to look at that, because that boundary is what we’re magnifying—it’s so much more visible here”.

Merriam says part of what makes Comic-Con special is that adults can connect to the feelings they had as children. He talks about toy buying, for example, and “getting back to a kind of pleasure that wasn’t obsessed with achievement, wasn’t obsessed with making anybody happy except myself. Getting the Star Wars toy isn’t my father’s dream, isn’t my mother’s dream, wasn’t anyone’s dream but mine. It was all mine”.

I ask about people dressing up as superheroes. Isn’t that the same? “I don’t think it is. When I was eight or nine years old, it was theoretically possible for me to become a superhero. You read they [superheroes] start training at the age of seven or whatever, martial arts master by 14. I’ve still got time [as a child]. It was still possible, there was no real sadness to the possibility of becoming a real superhero.

“In adulthood, and I can’t speak for the other cosplayers, it would be different. I no longer believe it’s possible for me to have superhuman abilities…It might look like the kids are having the same experience as the adults, and it might be another planet, another solar system”.

I ask him about Orson Scott Card sci-fi novel Ender’s Game, which I read when it published in the mid-1980s. The book comes to mind because the film adaptation releases a few months after San Diego Comic-Con 2013 ends, and an adult writes about the life of kids. What they think. How they feel. Merriam suggests the two worlds are different, so can an adult really capture the child’s perspective?

“That’s a huge question”, he responds. “A lot of gifted children have identified with Ender, because he’s at a place with sensibilities that people around him don’t have—and he must, like most gifted kids, have to defend himself in school. He uses violence very advisedly; he only uses it when it’s absolutely necessary.

“There’s a lot of ways you could read Ender’s Game as a novel about obsessive-compulsive disorders. With OCD, there’s always the hope you’ll do the ritual for the last time, and indeed in Ender’s Game he’s tricked into playing the game in a way that it’s the last time—and I always found that very moving”.

Merriam starts talking about the psychology of adult toy collectors, which is another point of separation from children. “To be a passionate collector, one of two things has to be going on: It has to be limited in some ways, there has to be some kind of boundary”. One-of-a-kinds is an example. “The second thing, it has to have a missing piece to it…That’s what makes people want to show their collections to people; there’s that one piece they can say ‘I’ve never found this’”. In other words: Rarity matters.

By coincidence I interviewed the Carter twins before Merriam. I explain about their collecting expeditions and how they see toy manufacturers adjusting sales priorities. He interrupts: “Actual children? That’s wonderful news…I’m very encouraged by that. To me, a sculpture is a very beautiful thing, and a toy is a very beautiful thing. But they’re there for two very different people, and like I said the creative and intellectual world of a child is usually very different from that of an adult”.

He explains: “When you’re selling toys to adult collectors, it’s hard for me to relate to them as an archaeologist of toys, because they’re very recent and not very archaeological; the other reason is…they’re preemptively rare. They’re not there for any interesting reason. They’re not rare because the toy company never believed anyone would buy Wonder Woman because she’s a girl, and action figures are for boys—that made Wonder Woman rare in 1984. They’re rare because it’s deliberately so”. Toy makers “say ahead of time we’re going to make this a limited-edition figure. There’s something artificial enough about that, it makes it less fun for me to talk about a collection of new toys because I can’t say ‘wonderful news’”.

I ask how he feels returning to Comic-Con as an adult after last being here as a child. Since he talks about the different experiences of children versus grownups, his answer interests me.

Merriam surprises me: “I don’t know that I’m the intended audience for Comic-Con”. I interrupt: “But in a way you are because you’re the scientist, the anthropologist, the archeologist, what it reflects about culture, people, ethics, mores—all that kind of stuff”.

He responds: “People love that. I just saw the Grant Morrison talk. It was very high-minded, it was very anthropological, and it got a standing ovation”. The Glascow, Scotland, native is a comic-book writer, occultist (“chaos magick”) and playwright. [Editor’s Note: Days before this book published, early-September 2013, Morrison bid adieu to writing Batman comics, completing a storytelling arc started in 2006.]

Merriam makes a startling assertion: “Everyone here is kind of an anthropologist. People here who really are aficionados of comic books really have more nuanced ideas of literature and mythology probably than a lot of literature professors do—just because they’ve seen more patterns come and go, they’ve watched things more carefully and they also have been dealing with popular literature, which was constant”.