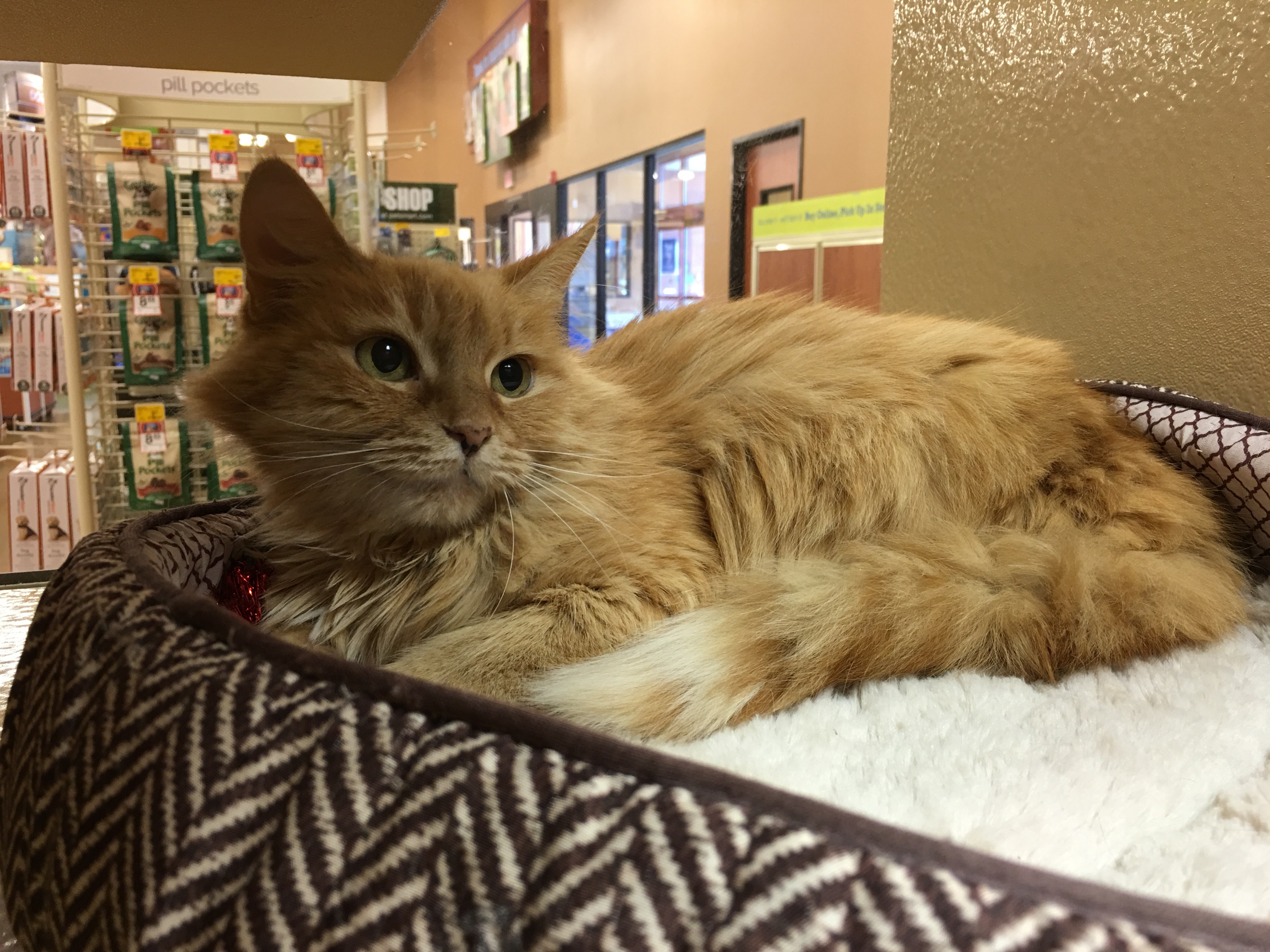 About a week ago, I moseyed into the Mission Valley PetSmart wanting some supplies and stopped to look at the cats up for adoption. We have two, Cali and Neko, and don’t need another; I meant to briefly window shop only. But the story of one beastie just ruptured my heart. According to her info card, she had been in a shelter for a year. A year! What could possibly be wrong with the little furball that no one would want her?

The woman tending the cats couldn’t answer. She fetched the kitty, which she named Lulu, from a Long Beach shelter, that could keep the kitty no longer. The adoption outfit working out of this PetSmart, and two others in the San Diego area, often rescues rescues (that’s not a type but verb and noun). Meaning: Adoptable animals that might otherwise be put down.

Lulu is about the shiest, saddest cat I have ever seen. She is depressed from being imprisoned for so long. With a little love, she could be a great pet. The adoption lady (who’s name I wouldn’t reveal without permission) speculates that Lulu’s shyness started the process leading to her long confinement. Many adoptees seek lively, engaging pets. So Lulu was passed over time and again. The longer she stayed in confinement, the more depressed, sullen, and listless she became.

The lady invited me to visit with Lulu, who sat in the lap and gladly received pats; although she recoils when a hand approaches her head—as if she had been abused in the past. But she lifts here hind end up, which is a friendly gesture; the base of the tail is a place where the critters often like to be petted.

Five days ago, while my wife shopped in Mission Valley, she stopped by the PetSmart at my suggestion. Lulu nestled into Anne’s lap for a bout 10 minutes then moved to a cat tree, where she welcomed a good brushing. Lulu’s long abandonment moved Annie, too.

So began the long discussion about adding a third cat to the Wilcox pride. Among the concerns:

Following Annie’s visit, I texted and talked with the two women responsible for adoptions, visited Lulu, and spent considerable time with her Sunday and Monday evenings (today is Wednesday). Lulu’s plight moved me, and she seemed such a sweet, but sad, furry thing.

I made a tentative arrangement to meet the main adoption lady this morning. As I lay awake last night, my desire to bring home Lulu illuminated the night. To my surprise, today Anne greeted me with same sentiment before I could climb out of bed. She was ready to adopt Lulu, until my discussing practical concerns dampened her enthusiasm.

We decided to go to PetSmart together, where Lulu was the only cat there; others had been adopted. She seemed more settled as the solitary beast; she nested in a kitty bed visible to anyone walking by rather than stay hidden behind her litter box. A half-dozen other cats, mostly kittens, arrive today. In solitude, Lulu looked freer, yet sadder, and I wondered if our two kitties, who already have carved out their territories, would allow a place for her.

Anne and I wanted to adopt Lulu, but the head had to overrule the heart. Our home likely isn’t the right one for her. She is sweet but sullen. Delightful but depressed. She needs someone who can give her a place to hide and feel safe; opportunity to emerge from her solitude to receive pats, food, and attention; time and experience to re-establish trust with human being(s); and a chance to rediscover herself, her sense of catness.

Lulu will make a great pet, and that is obvious to me from my interactions with her. The adoption lady agrees from taking the forlorn kitty home to her cattery for a few days. Why no one wanted her, for a whole year, baffles me. If we didn’t have two other felines, she would be settling into the Wilcox domicile already.

Would you take her, if living in San Diego? Should I?