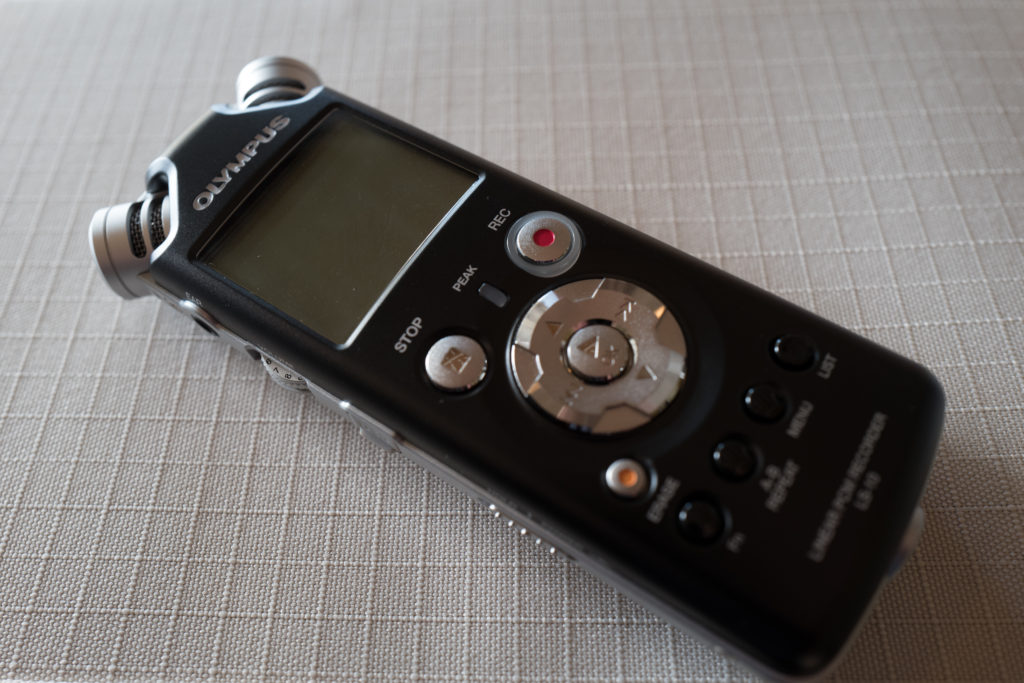 The process of moving residences after 10 years is opportunity to assess objects—and their value to keep or part with and what they once meant. Our garage is a treasure trove of memories and missives, like the Olympus LS-10 Linear PCM Recorder, which I ordered from Amazon on June 9, 2010. Strangely, perhaps ironically, the purpose for which I purchased the device made it obsolete.

On Oct. 12, 2017, I pulled the voice recorder from a box, where it was carefully coddled in a protective case. But both batteries had ruptured, and their acid apparently damaged the circuitry. After being cleaned and receiving fresh AAs, the LS-10 stubbornly refused to power up. Strange that it looks so new and ready to use. No more. I shot the Featured Image with Leica Q. Record button is focal point. Vitals: f/5.6, ISO 400, 1/60 sec, 28mm.

Fruit vs Flag
A remarkable event prompted the $232.49 purchase, which well-served me despite unnecessarily complicated controls. Stores bearing respective fruit and  flag logos would clash on June 24, 2010 at Fashion Valley Mall, here in San Diego. I bought the LS-10 to record interviews, some of which would go into a podcast.

Some background: For the desktop-computing era, the rivalry between Apple and Microsoft is legendary in the annals of technology competition. Cofounders Steve Jobs and Bill Gates, respectively, took different approaches to the PC: end-to-end development and control, for the one; software licensing and broad platform ecosystem building, for the other. Windows won the war, and its dominance grew so great that American and European trustbusters sanctioned Microsoft for abuse of monopoly power. Apple’s Macintosh couldn’t compete for marketshare.

But Jobs and company transcended Microsoft by rising above the Office-Windows PC hegemony into another product category—that with its enormous success since is even more personal than the personal computer. Of course, I refer to iPhone, which launched on June 29, 2007. Three years later, iPhone 4 went on sale and Microsoft’s fourth retail store opened four doors down from Apple’s shop in the same mall, on the same day. There was something truly symbolic, even metaphorical, about two tech titans, representing past and present platforms, convening major events.

Foreshadowing: Four weeks earlier, Apple’s market capitalization passed Microsoft’s—$225.98 billion compared to $225.32 billion. For some here-and-now perspective, with iPhone X preorders set to start at Midnight PDT October 27: $807.894 billion and $606.66 billion. Change was in the wind, seven years ago, and these two store events measured its speed and strength.

The year 2010 marked a dramatic turn for the fruit-logo company’s financial future and invasion into the global psyche. As I explain in April 28, 2011 analysis “Chart: Apple’s amazing year of iOS“: “The revenue curve from Q1 to Q4 2010 is simply stunning. Apple revenue nearly doubled, as did its net profit—from $13.5 billion to $26.7 billion and $3.1 billion to $6 billion, respectively”. The clash at Fashion Valley had to be documented.

Yes, I used the LS-10, as planned, but rarely thereafter. iPhone 4 proved to be a fantastic recorder either with built-in mic or external attached. Audio files auto-synced to iTunes. The Olympus was kludgey to use and also to extract recordings, despite appeal of superior capabilities.

Now, my LS-10 is an artifact for recycling. I don’t regret the purchase; the device served its purpose, and not just for the one event. Not long later, though, I made Apple’s smartphone my primary recorder.