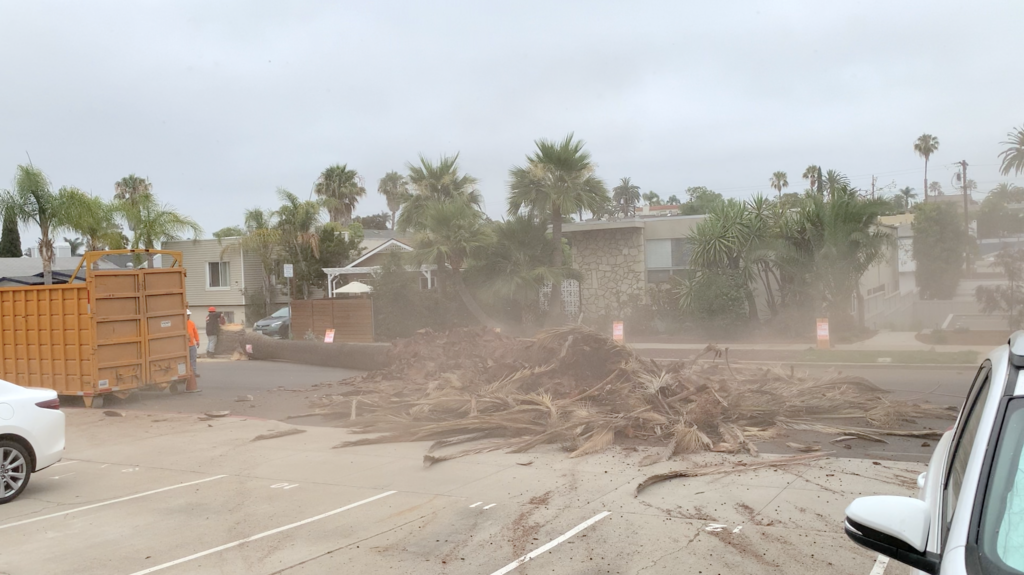 My day started with resolve not to document destruction of the majestic palm infested with South American Palm Weevils—across the street from my home office window. But my wife and I watched the preparation stage, which was the city towing a pickup truck, baring Washington State plates, parked directly beneath the block’s major wildlife habitat.

Soon after, we heard the surprising sound of a chainsaw but could see no lift raised high so that a cutter could sever fronds from the palm’s crown. From a different window, Annie spotted someone working the base of the tree and a rope tied to the top. Then we realized: Rather than the more typical cut-from-the-top-down method, the men approached the project like lumberjacks would back home in Maine.

I rushed outside with iPhone XS to capture the dramatic moment, for 39 seconds ending at 9:09 a.m. PDT. The Featured Image is a still taken from the video. The cutters were so efficient, they had all the debris cleared before I could publish this post, less than an hour later.

Update: Speaking with one of the workers, he communicated that the tree was headed to the city dump because there is nothing that can be salvaged from it. My neurons connected the dots: In researching about the beetle infestation, I learned that infected trees are supposed to be completely destroyed (burning being one method). Other (healthy) palms removed around my San Diego neighborhood of University Heights were chopped top down so that the wood could be shredded and, presumably, recycled. Hence, the different cutting method.

The crew remained until early afternoon, tidying up, removing the stump, and mulching it. They were so efficient that few people could guess that hours earlier a mighty tree rose over the block. From the way the top disintegrated on impact with the street, the infestation already had killed the palm crown. Removal had to be.