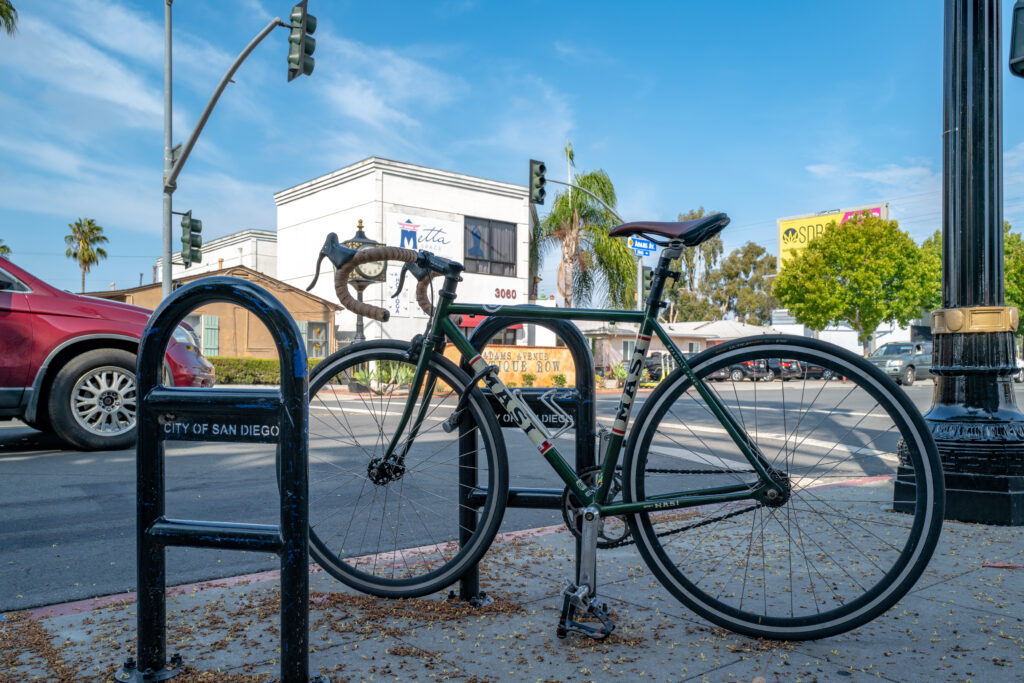 My walk to the pet store on Sept. 25, 2021 was an unexpected trip down memory lane. On the corner of Adams and Ohio, at the leading edge of San Diego’s Normal Heights neighborhood, someone had locked up their Masi Speciale Fixed. What a great roadster. I used to own the exact same color and configuration.

I bought my Masi in November 2008 and treasured her (my site, my pronoun choice)—the more after thieves tried to steal her (February 2010) out of a locked garage (they got bicycles belonging to my wife and daughter—bastards). The Speciale Fixed is what the name implies: single-gear. However, the bike sports a flip-flop hub that allows freewheel conversion. In fixed-configuration, pedals always move when the wheels are in motion. Freewheel is what most riders are accustomed to: Coasting when not actively pedaling.

Fixed hub is great exercise because your legs are constantly moving. But the setup can be troublesome when riding downhill. As the bike picks up speed, so do the pedals spin faster. For my aged limbs that meant leaning heavy on the handbrakes during downward inclines. The configuration is best for commuters traveling relatively level streets—or, I guess, anyone capable of pedaling really fast. There are natural human limits to leg movement, and fixed gear checks how speedily a rider goes on backroads or in traffic, which could be viewed as a safety benefit.

In July 2013, I sold my Masi and replaced her with a vintage, circa-1980s Guerciotti Sprint—a 12-speed. However, following cataract surgery that replaced my natural lenses, something about pedaling across bumping roads and alleys causes up-and-down visual disturbance. Regrettably, I had to acknowledge no longer being a rider who could be safe—whether myself or to others. I painfully parted with the Guerciotti in January 2018 and now walk instead.

Seeing the Masi Speciale Fixed sadly reminded of when I could comfortably, joyfully bike.