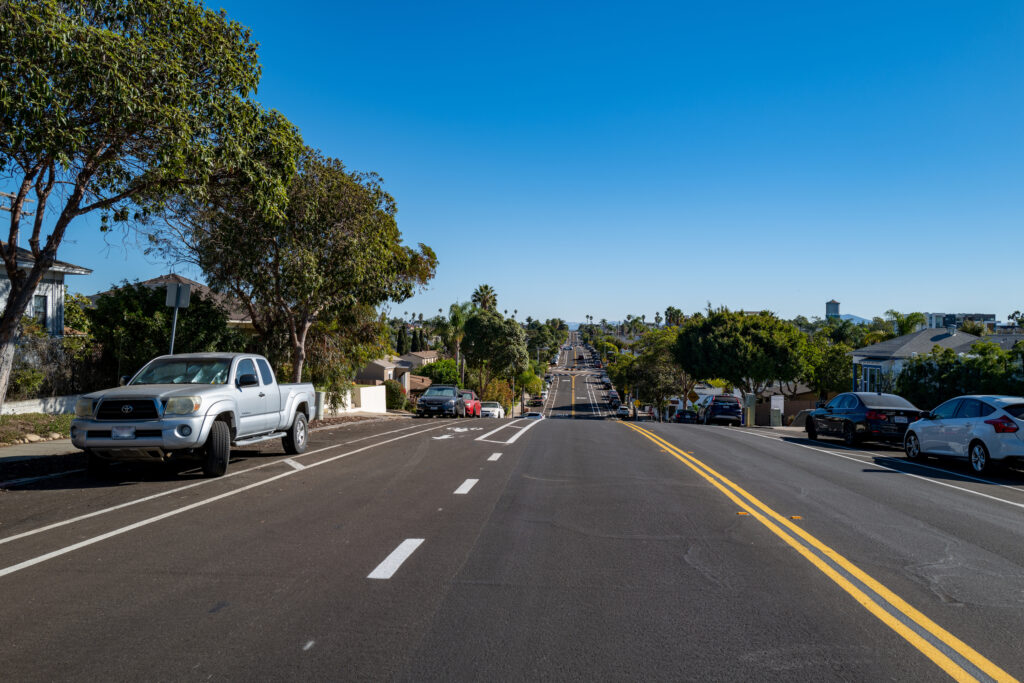 The Georgia-Meade Bikeway, about which traffic circles I have negatively opined, nears completion—and certainly appears to be ready through the University Heights to Normal Heights portion. In observation, and preparation to write about the occurrence, I captured the Featured Image on Nov. 28, 2021. Vitals, aperture manually set for this and the two companion photos: f/8, ISO 100, 1/200 sec, 28mm; 9:59 a.m. PST.

The view looks down Meade Avenue from Georgia Street. The traffic circle at Alabama is clearly visible but barely the one at Louisiana two blocks beyond. Near the horizon to the right is the North Park water tower, which many locals regard as an essential navigational landmark. 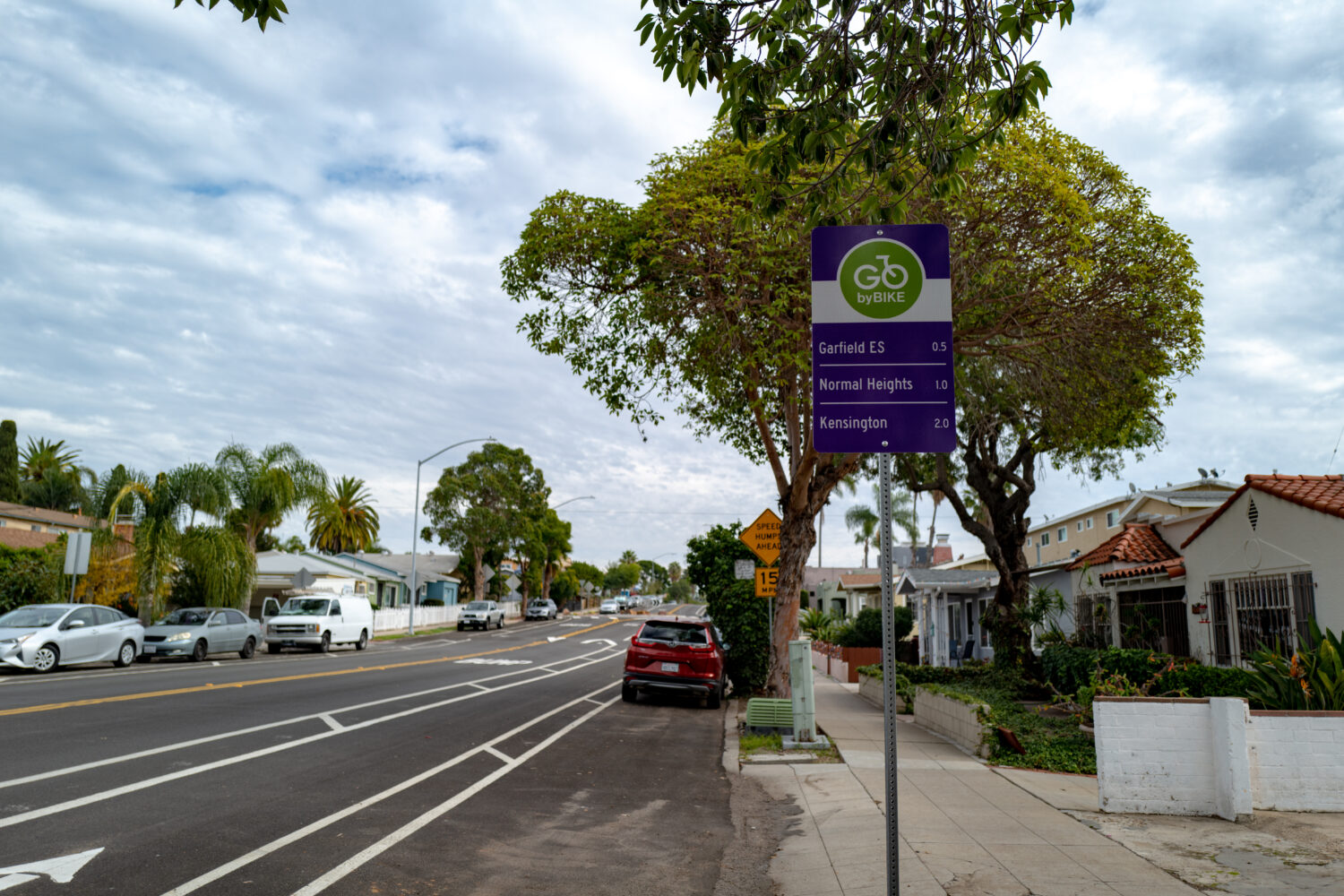 The second shot shows one of the recently installed signs specifically for bicyclists, although walkers would find the distance information to be just as useful. This one is located down the hill from the vantage in the previous photo, just beyond Florida and approaching that roundabout at Alabama. Vitals: f/2.2, ISO 100, 1/2000 sec, 28mm; 12:18 p.m. PST, December 21.

I had planned to post the two pics and brief musing the next day. But something surprising greeted me in the morning: Workmen had blocked off the intersection at Alabama and Meade. As I approached, two of them appeared to be discussing “North Park”, which is etched into the traffic circle’s surface. On Oct. 1, 2020, I asked: “Who Authorized This?” since the structure is located in University Heights. 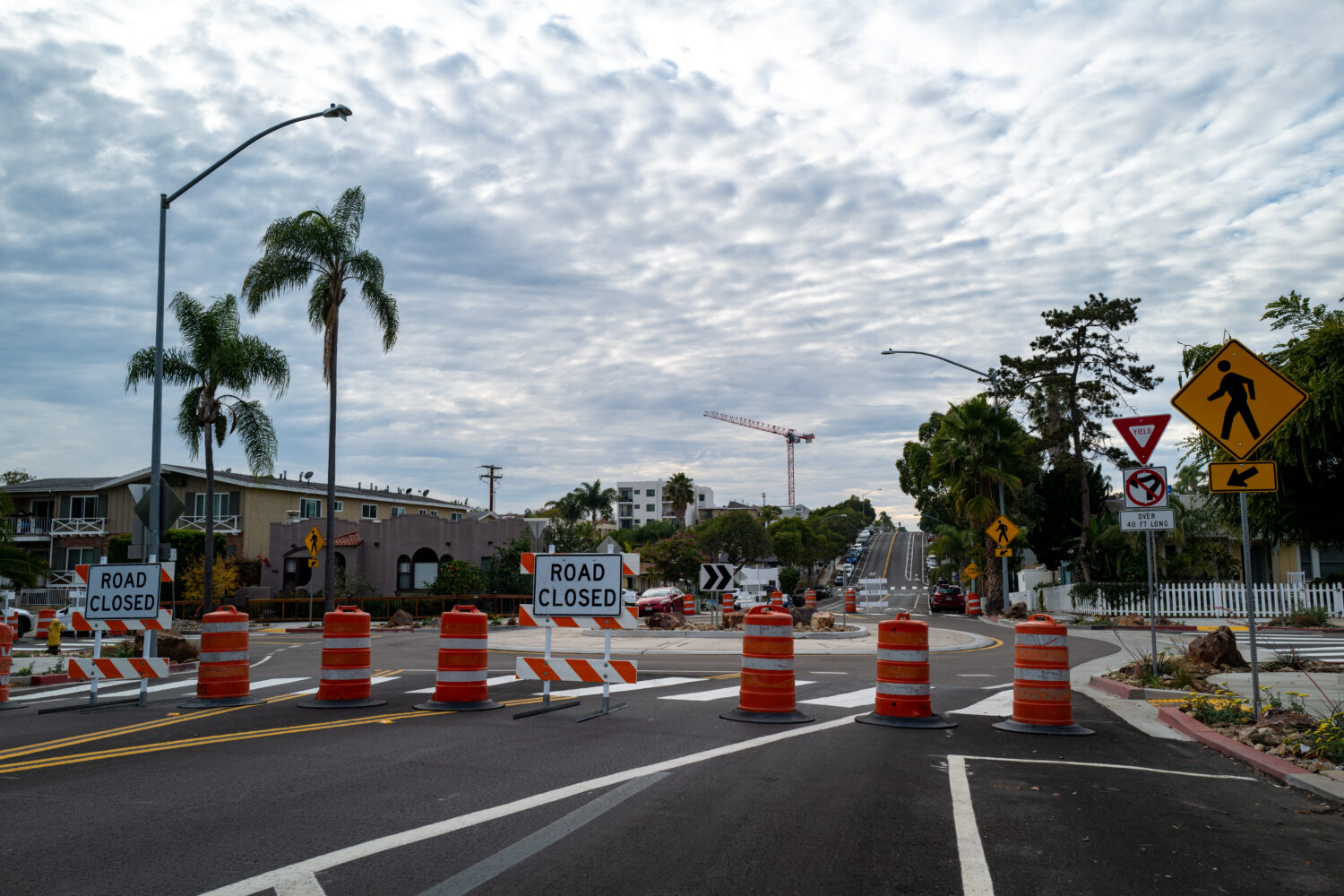 Sure enough, the gents strategized how to correct the name. From my query then, and another 14 months earlier, the fix won’t be easy—and presumably costly. But that bureaucratic blunder deserves separate treatment, and photo, depending on how—and if—the correct community name can replace the other. The road remains blocked today.

Vitals for the final photo: f/8, ISO 100, 1/100 sec, 28mm; 3:25 p.m., December 22. I used Leica Q2 for the set, and all are composed as shot. The perspective looks up Meade past Georgia to the stoplight at Park Blvd. The crane center-left belongs to a massive condominium construction project that replaced a church that used to give away food most Fridays of the year. After long delay, I will write about that sometime soon. And I must confirm condos; if not, then apartments. I’ll let you know which.

Finally, the title means to mock San Diego city planners and somebody’s belief that Californians can be coaxed into abandoning cars for bicycles, which are presumed to be more environmentally friendly. I see no more riders now than before the bikeway’s establishment. Perhaps, the lanes make two-wheeling it safer, which must mean something. But that’s a long way from the project’s loftier goals. Hey, just saying.