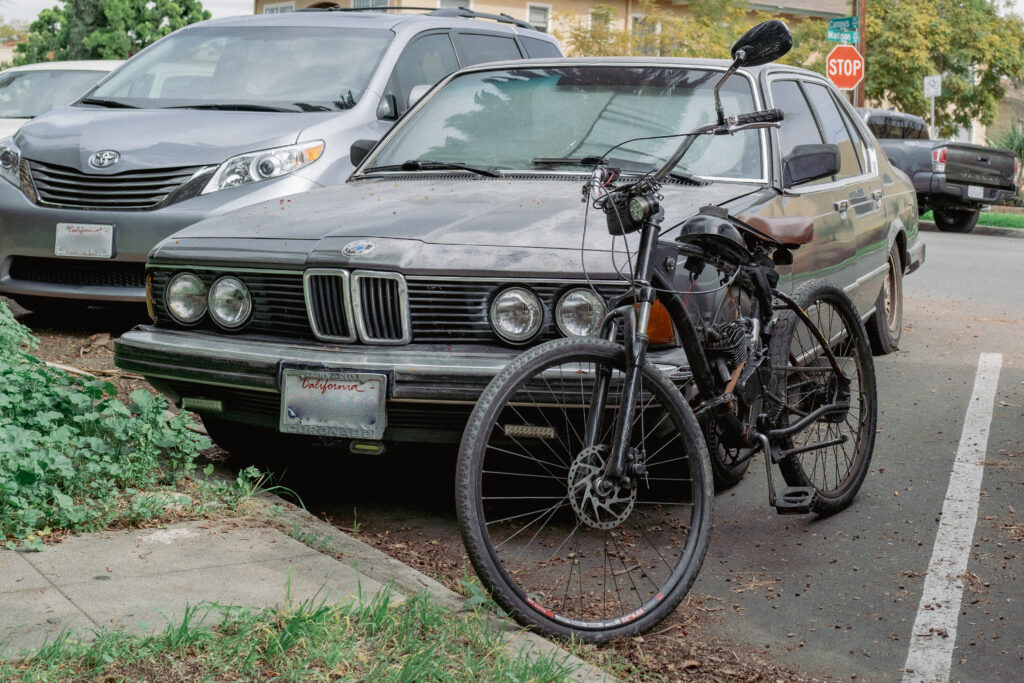 As part of its strategy to reduce so-called carbon emissions, San Diego is building bikeways through various close-in neighborhoods. The one starting at Georgia in University Heights and ending at Fairmont in City Heights is complete. My wife and I drove the length along Meade Avenue on Jan. 29, 2022 to attend the free-admission Lunar New Year celebration sponsored by the Little Saigon Foundation. However, Officer Jeremy Henwood Memorial Park and the surrounding area was so packed, and parking so scare, we did a drive-by only.

A series of traffic circles and speed bumps has greatly reduced vehicular traffic along Meade—not that a marked increase in bikers is apparent. What I do see, and this is something that should trouble city planners and their long-term goals: An alarmingly greater number of motor-powered bicycles. Everywhere. Some are pedaled, too, and most are battery-electric. But not all.

The Featured Image, taken earlier the same day using Leica Q2, is example. This bicycle is petrol-engine converted. Isn’t that the kind of motor used in lawn mowers—or something like them? If bikes pollute like cars, what’s the point of encouraging their increased use? Or, if people zip about at higher than pedal power speeds using electric engines, won’t two-wheel injuries increase? Disturbingly?

Unintended consequence is an axiom applying to just about any bureaucratic endeavor overseen by one or more committees. Their collective mind thinks it can think for the body public. But individuals typically act for their own benefits, rather than in concert with the identity group targeted by the bureaucrats, whether they’re from businesses, governments, or other organizations.

Motor-powered bikes are example, regardless whether they are gas-guzzlers (polluters) or electric (non-health benefit). Then there is the “if we build it, they will use it” planning presumption, which so far fails with respect to bike lanes increasing bicycle traffic. Maybe somebody sees the potential problem: The city has now installed counters on the new bike lanes along 30th Street in North Park to assess their use. The data is publicly available. As I write, the daily average is 294. My question: Are the counters sophisticated enough to differentiate—between, say, a bike and (rented) electric scooter?