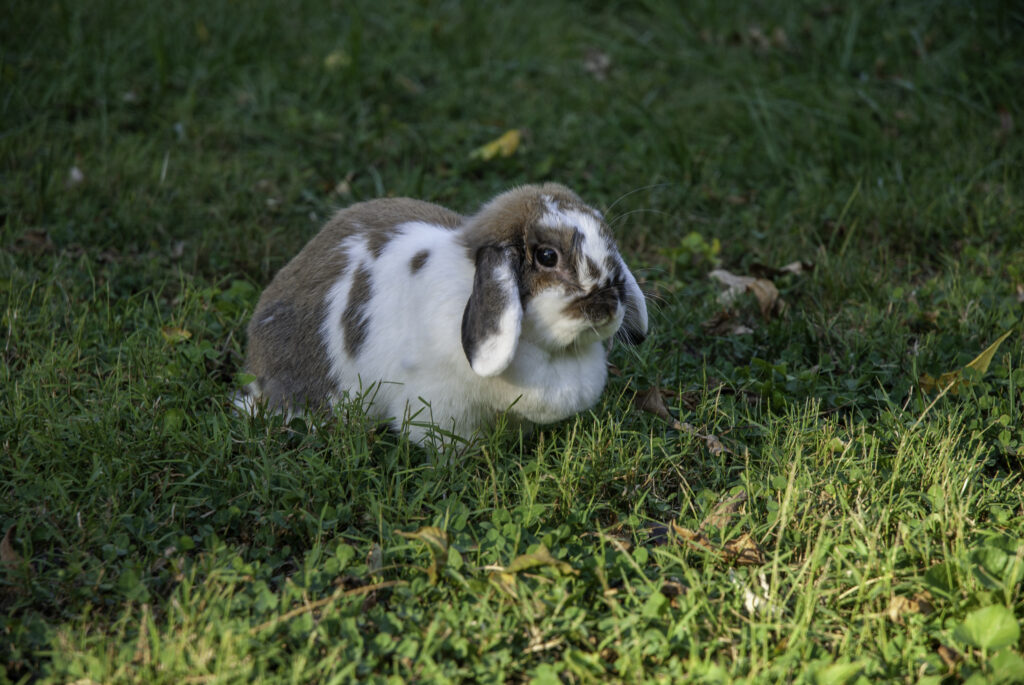 I feel sentimental about our bunnies on this solemn Sunday evening. We let them go to a new home on Sept. 30, 2007, marking many of the painful final preparations before relocating from the DC/Maryland-metro area to San Diego. The Featured Image finds Daisy enjoying one final romp around the backyard, about two-and-a-half hours before her new caretakers came for her and Mayflower. Vitals: f/4.5, ISO 100, 1/80 sec, 70mm; 5:25 p.m. EDT. Portrait is from Nikon D200, composed as shot.

We adopted the flop-ear rabbit in August 2003 from Animal Exchange in Rockville, Md. My daughter had seen bunnies at Montgomery County Fair and asked for one. We stopped at the pet store en route and ended up taking home Daisy, who was already about six months old. She ran loose in my basement office throughout the day, or around the backyard. She stayed in her cage overnight. Daisy was a joyous, constant companion while I worked.

We left behind more than our rabbits, 15 years ago. Our souls stayed, too, so to speak. We moved to Communist California to assist my aged father-in-law and remained after his death because of our daughter’s situation.

But my wife and I long ago overstayed our time here. Weather is wonderful, but we floundered like fish out of water from the first day onwards. Socialist San Diego culture suffocates accountability, common sense, frankness, honesty, and proactivity. The atmosphere is (figuratively) oxygenated by complacency, conformity, fear, dishonesty, relativism, and unaccountability. We have flopped around for far too long; we need to get back into the water and breathe.

As our fifteenth anniversary here approaches, I think of Daisy. If do-overs were possible, the rabbit would have lived out her life with us as we stayed where we were acclimated and better belonged. Mixing metaphors, California is a tough taskmaster and its societal slavery debilitates and exhausts us. We must either escape or triumph over the slave state (of mind).