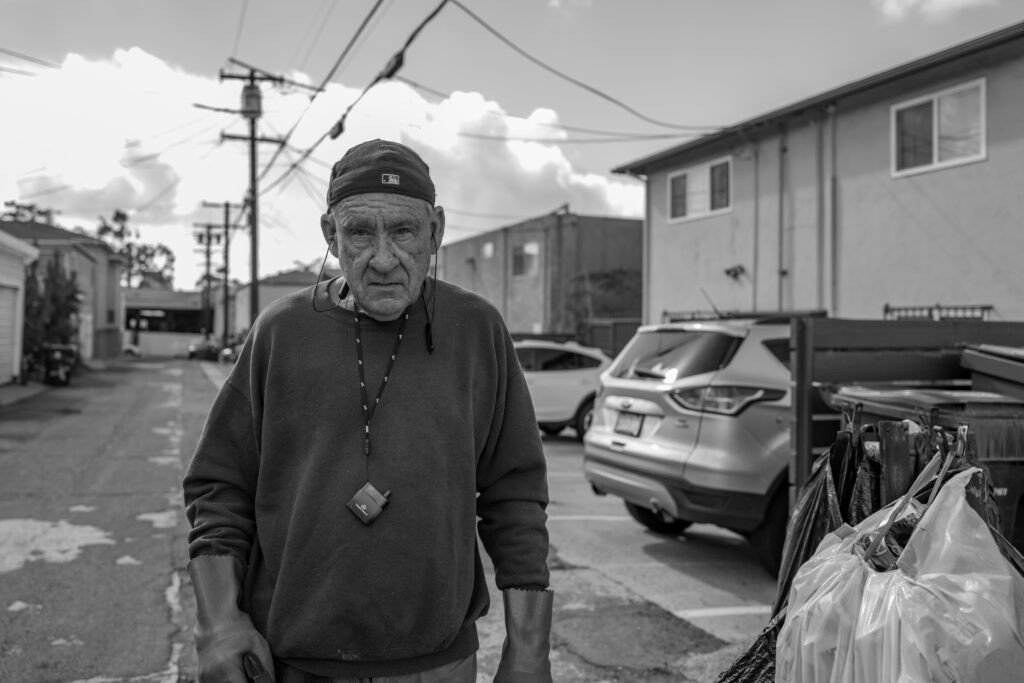 A year or so before China locked down Wuhan because of SARS-CoV-2(severe acute respiratory syndrome Coronavirus 2)/COVID-19, I saw someone rummaging recyclables from bins in an alley. I had a bag of seltzer cans to put out and gave them to the fellow, whom fit my stereotype of a homeless scrounger. But days later, we passed again—and then less than a week later, once more. He was a regular.

When we had amassed more giveaways and he appeared in the alley, I made a delivery and conversation. He wasn’t homeless! He lives here in my San Diego neighborhood of University Heights. He is perfectly housed and also nearly blind. Meet Pat. I wish more people showed as much self-reliance, even without a debilitating handicap.

A Go-Getter
Pat is well-traveled. He cooks, still, as was one of his several careers. He can speak, and teach, more than one language. Ha! He abandoned television at age 15. Why watch other people’s lives when you can live your own—and he has, although much more limitedly now because of visual impairment.

I don’t know the clinical diagnosis, but something isn’t right with his retinas, such that his centerfield vision is gone. He sees somewhat peripherally, which is enough for him to maintain some semblance of activity—including collecting cans and other recyclable containers. He worked all his life and won’t stop now. Being active, earning something, is almost a compulsion. If only people with a fraction of his disability demonstrated as much gumption and a lot less willingness to whine for government handouts. 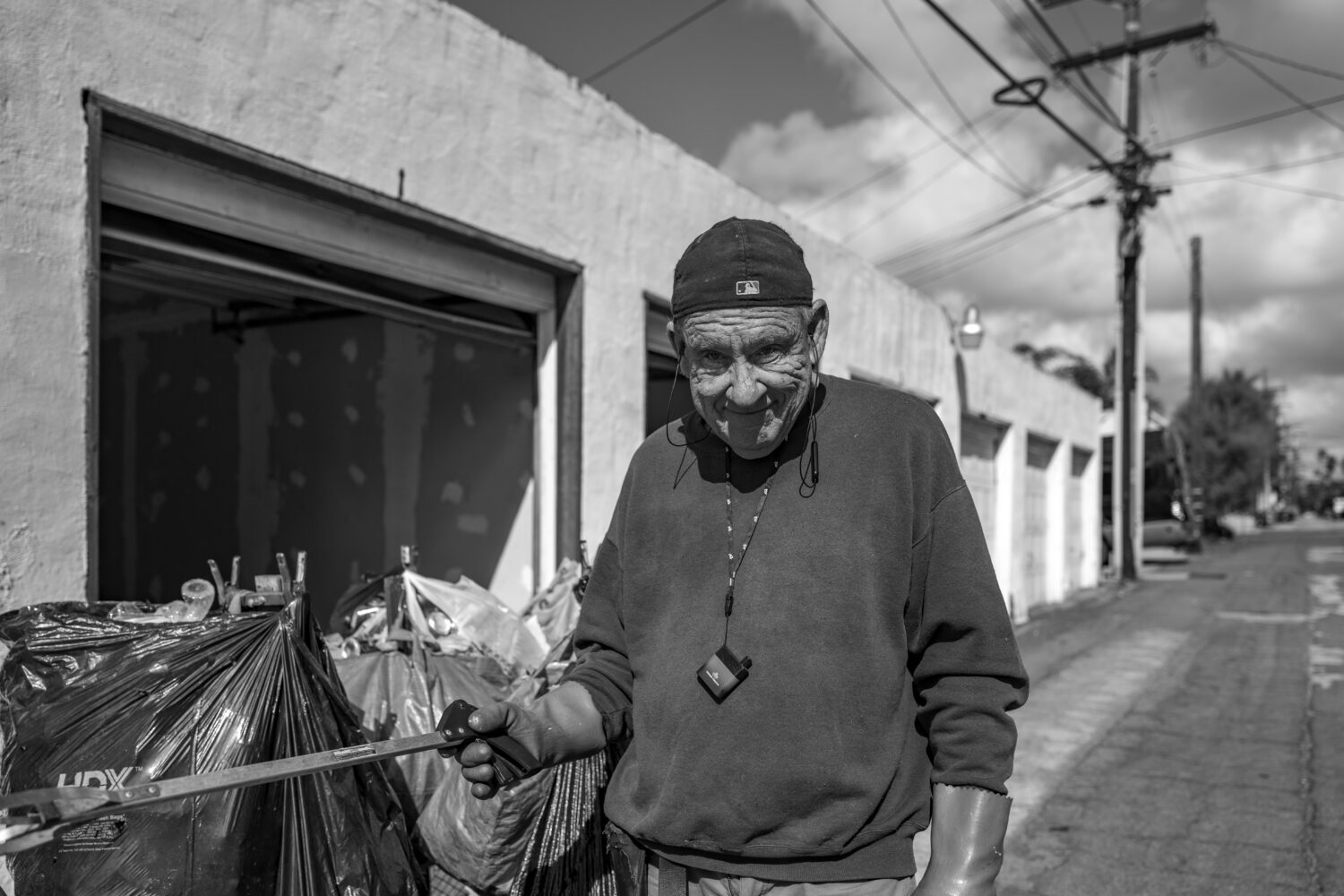 When I stopped Pat this morning to ask to shoot portraits, he had been out rummaging for about four hours—and didn’t realize how long until asking me what was the time. He had amassed quite the haul, on this fine Thursday. Lucky timing: Blue bin pick up day and the World Series made for a Mother Load of bottles and cans (people drink beer and soda while watching baseball).

Liberating Tech
During our second or third meeting, a few years back, I offered Pat an extra Google Hub—freebee from another purchase—languishing in a closet. The major benefits of the voice-activated device took some effort to explain. The category was still relatively new.

Once Pat got the basic concept, he gladly accepted the thing and took it home, where a friend helped set up the device (I did offer to, of course). The experience was life-changing: He could call up books or news stories to be read to him; conduct Internet searches (basic stuff starting with weather forecast); and listen to music or podcasts—all by voice command. 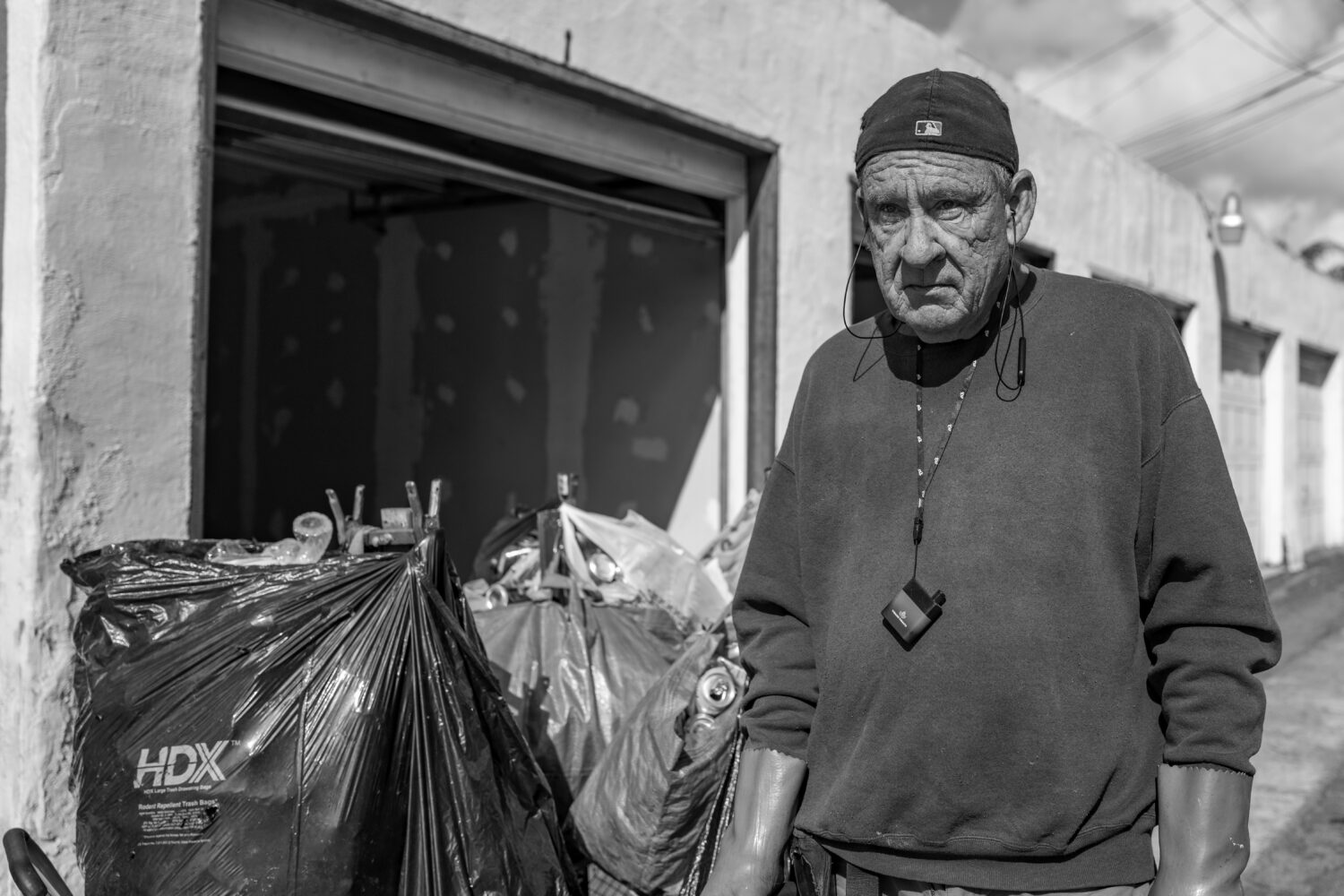 In the trio of photos, he wears a device from which he listened to something (I didn’t think to ask what) as he rummaged bins. Music, perhaps?

Monochrom Moment
Let’s discuss the portraits, all taken using Leica Q2 Monochrom and presented in order shot. The Featured Image puts the sun behind Pat, and Cumulus clouds defuse the light from overwhelming with silhouette. Vitals, aperture manually set for all: f/2.8, ISO 200, 1/2000 sec, 28mm; 11:17 a.m. PDT. My wife says this is the most flattering of the three, and I agree.

For the other two, sun is to my back. Blaring light on Pat creates harsher shadows and extenuates features like lines in the face. If I were to use only one pic, the first would be it.

But each of the pair is more contextually relevant. In the one, you see Pat’s playfulness, with the grabber he uses to latch on to bottles or cans. In the other, he is the serious rummager, standing alongside his cart with bags bulging with aluminum and plastic containers. Vitals for both: f/2.8, ISO 200, 1/8000 sec, 28mm; 11:18 a.m.

If Only
Pat will never see any of these three portraits. Perhaps if turning his head askance, he could make out blurry shape recognizable from the mirror. His affliction is cruel.

I’ll close with this: Making assumptions about folks is too easily done. Many people probably presume Pat is homeless, when he is a hard worker within his capabilities. He has other skills, and not just cooking or languages. For example, he also manages the apartment building next door to his residence. He has other streams of income, too. But alley foraging is uniquely satisfying. Pat keeps physically fit by being active—and outdoors—also staying self-sufficient enough to maintain mental health.

You should be so motivated, or I.