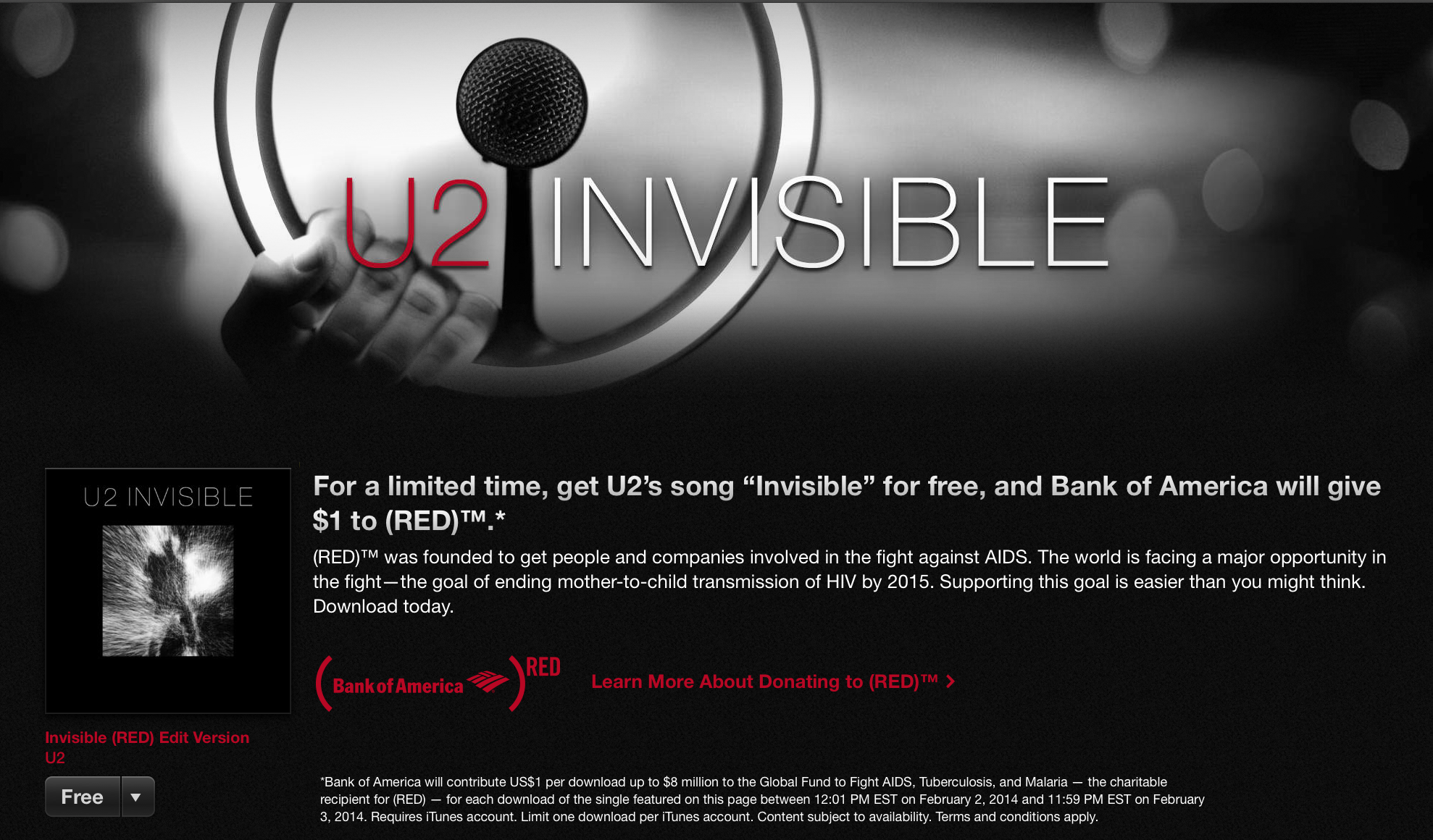 Super Bowl XLVIII is a real snoozer, with Seattle’s huge lead, and the adverts aren’t much more interesting. Among the few catching my attention: U2 song “Invisible” free on iTunes, with Bank of America donating a buck to (Product) RED. The promotion/donation ends 11:59 p.m. EST February 3.

On Sept. 29, 2006, I posted a quick analysis about (RED), which was then freshly started, to my JupiterResearch blog. The site is long gone, but I have the posts archived. What follows is the original text, complete with the original links, including to MySpace. Facebook was just a wisp seven-and-a-half-years ago. What that brief introduction…

I remember a time when people were supposed to be “better dead than red“, during the days before the Soviet Union collapsed and the Wall fell in Berlin.

Clothier The Gap is going red, but in reverse context. Today, I got the new issue of Entertainment Weekly (October 6). On the back cover is a provocative Gap ad with the slogan, “Do The (RED) Thing”. The ad taunts, “Can an individual change the world? Yes you can”. How can people make this magnanimous contribution to humanity: By buying Gap (Product) RED clothes, which are “designed to help eliminate AIDS in Africa”.

Gap (Product) RED garments and accessories go on sale October 13. While it might seem like cheesy, feel-good marketing—and no doubt there is huge corporate profit motive—Gap really will contribute a portion of sales to fight AIDS. Gap pours on thick feel-good (or feel-guilty) marketing. Text over one garment at the Gap (Product) RED Website reads: “Can a T-Shirt save the world? This one can”.

(Product) RED, or (RED) is the branchild of U2 lead singer Bono and DATA (Debt, AIDS, Trade, Africa) Chairman Bobby Shriver, who wants to raise AIDS awareness and funds to fight a disease devastating huge portions of Africa’s population. The men’s goals are noble, and it’s commendable that companies like American Express, Gap and Motorola are supporters.

Fashion and accessories—whether T-Shirts, jackets, credit cards, or cell phones—make for a pretty good approach. Look what Lance Armstrong’s Live Strong, and all those yellow bracelets, did for cancer awareness (and fundraising). People likely will notice the distinctive red items.

(RED) can succeed if its supporters can sell it as a lifestyle. The most successful products share successful lifestyle marketing in common. Starbucks isn’t about coffee, but a kind of mobile lifestyle. It’s the modern version of the watering hole or frontier saloon, where people gather and socialize. Otherwise, why pay a buck-fifty for a plain ‘O Joe—or $3-$4 for a fancy coffee, which, by the way, denotes hipness. Apple and Harley Davidson are among the other companies successfully selling their products as a lifestyle choice. Charity—doing good for other human beings—is another kind of lifestyle marketers can appeal to. Live Strong is a great example.

I do have mixed feelings about the (unholy?) alliance between lifesaving charity and big business. Using Gap as example, big business marketing muscle could sell loads of (RED) goods. Gap and other companies can turn red into a do-good fashion trend, raising awareness and funds.

But, at what hidden cost? The companies have strong profit motive, which has nothing to do with goodwill. If anything, their marketing efforts would propagate the kind of consumerism and materialism that I contend puts Americans’ priorities in the wrong place.

Worse—and I hate to even suggest it—what people elsewhere in the world might be exploited in the production of these (RED) goods? Buzz is that Gap has set up one factory in Lesotho, Africa, to make some (Product) RED garments; presumption is the factory will contribute to the goodwill of its 4,500 workers and the local economy. If so, then good for Gap and great for (RED); the contribution would go beyond just percentages of goods sold.

I don’t mean to slight Bono, Bobby, or (RED) with my skepticism. I applaud what (RED) is trying to do. What I’d prefer is more financial commitment from business. American Express says it will donate at least 1-percent of (Product) RED item sales to the cause. Gap doesn’t say—not that I could find anyway. Maybe what I want, which would be the companies contributing a large portion or all (Product) RED profits to fight AIDS in Africa, is unrealistic. The (RED) website states its (presumably) realistic objectives:

If you buy a (RED) product or sign up for a (RED) service, at no cost to you a (RED) company will give some of their profits to buy and distribute the anti-retroviral medicine to our brothers and sisters dying of aids in Africa.

We believe that if consumers are offered this choice, and the products meet their needs, they will choose (RED). And if they choose (RED) over non-(RED), then more brands will choose to become (RED) because it will make good business sense to do so. And more lives will be saved.

(RED) is not a charity. It is simply a business model. You buy (RED) stuff, we get the money, buy the pills and distribute them. They take the pill, stay alive, and continue to take care of their families and contribute socially and economically in their communities.

If they don’t get the pills, they die. We don’t want them to die. We want to give them the pills. And we can. And you can. And it’s easy.

In the long run, I predict that the companies selling (RED) products stand to profit more than the mass of HIV-infected people in Africa. I know plenty of Americans who make product and brand decisions for philosophical reasons. I’m one of those people. I won’t shop at Wal-Mart—and that’s another kind of lifestyle choice. (RED) supporters stand to benefit from their association with philanthropy, of fighting the good fight against AIDS. American shoppers may buy more of their goods because of the (RED) association.

Still, there is some nobility in the effort, even if the companies do benefit more than the mass of HIV-infected Africans. A large group is made up of individuals, and there is no value that should be placed on a human life. Saving lives is good work, even if I question corporate motivations. If donated pennies save or prolong one life, the value is immeasurably greater than millions of dollars more siphoned into corporate coffers.

I know lots of people who feel justified by their motivations, that if they do something wrong their intentions justify their actions and exonerate their bad behavior. I hate to say it, but the real good is too often done by people with questionable or bad motivation who take action. I believe that saving lives is good work, regardless of (RED) supporters’ corporate profit motivations. Even the devil can do good sometimes. But he hasn’t done enough good, and neither will these companies—or so I predict.