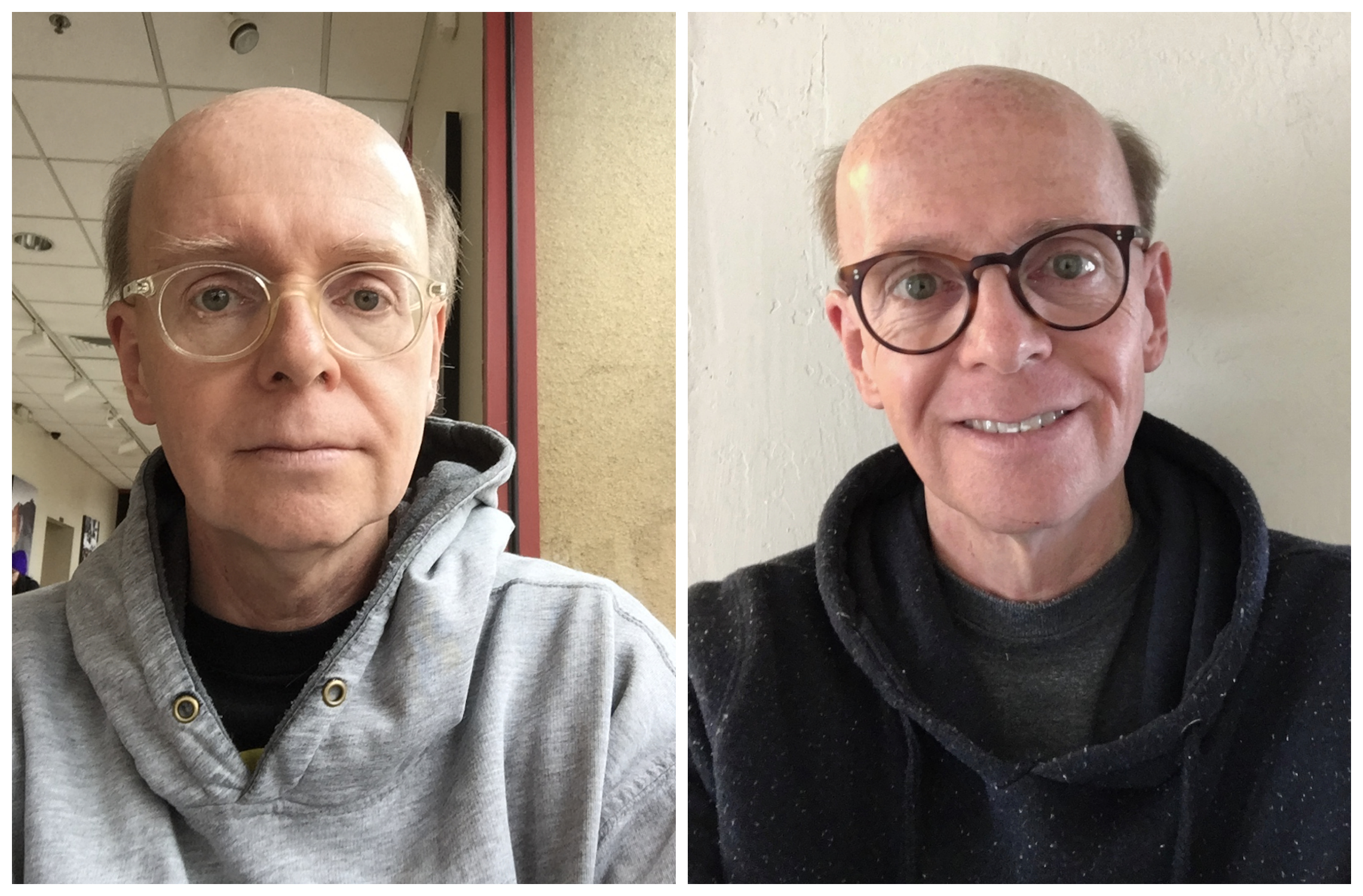 My past personal photo comparisons focused on a decade’s separation. Two years can make a difference, too, in terms of weight, health, and appearance. Both pics are self-portraits—the left from Jan. 11, 2015 and the other Jan. 7, 2017, shot using iPhone 6 and iPhone 7 Plus, respectively. In the older photo, I weighed 63.4 kilos (139.8 pounds). The newer: 15 kilos (10 pounds) less, or about the same as 40 years ago, during my senior year of high school.

Occasionally, someone locally who hasn’t seen me for awhile will with concern ask if I’m ill, for being so skinny. Not at all. I tightened up my diet, cutting carb consumption by 80 percent-plus—and sugar by even more, when aware of its presence. The sweetener is in everything, and it is not so easy to expunge from the diet. Before changing my eating habits, and weight-loss was a byproduct not the purpose, I tipped the scale to 82.6 kilos (182 pounds).

Going back to 1977, I subscribed to some statistical newsletter, which name is forgotten as well as reason for choosing it. But I couldn’t forget a startling chart that put side-by-side two seemingly unrelated trends: Rise of heart disease and increase in sugar consumption. The author rightly observed how shockingly similar were the graphs and theorized that sugar, and not fat, was the major cause of heart disease—a very unorthodox conclusion four decades ago, when the assault against saturated fats was official nutritional orthodoxy. He convinced me, and there is increasing evidence supporting the theory in the 2010s.

Cutting carb and sugar consumption was one of the best changes ever made to my lifestyle—and it required discipline and commitment because I so loved eating pasta, bread, and the like and carb and/or sweet things engulf Americans. The two are cultural monuments. I thought of myself as an alcoholic, who must abstain uncompromisingly. A taste here, or there, and I could fall back into deeply engrained eating habits, around which there were decades of fortifying memories. Losing weight was an unexpected byproduct that made staying true easier.

I consume less, too, by serving smaller portions. For example, I often eat from a white IKEA coffee mug or brightly-colored kid’s plate. Studies show that humans will devour as much as served, so I serve less and eat to satisfaction. If the smaller portion doesn’t satisfy, hey, I can always have seconds. Firsts shouldn’t make me, or you, feel overly full and sluggish.

I don’t count carbohydrates, by the way, as someone obsessed might. But I do look at food labels to see what’s what. The simplest solution is eating fresh. If you prepare the meal, you know what’s in it—and more importantly what’s not: Added sugar.

On Dec. 27, 2016, day of release, I started reading the digital version of book The Case Against Sugar by Gary Taubes. My father-in-law’s death has slowed progress, but so far the tome is riveting reading. Writing for Vox, Julia Belluz and Javier Zarracina get to the point in “Sugar, explained“, with Gary’s book as scene-setter. It’s a fantastic primer. The point of both reads: There is a whole lot of added sugar in most packaged foods, or that prepared at restaurants. Here’s a tip for you low-fat food shoppers: Manufacturers add extra sugar for taste.

I highly recommend Gary’s book, which in my reading so far puts sugar in historical context as well as scientific—and he contends that the substance is addictive:

Sugar does induce the same responses in the region of the brain known as the “reward center”—technically, the nucleus accumbens—as do nicotine, cocaine, heroin, and alcohol. Addiction researchers have come to believe that behaviors required for the survival of a species—specifically, eating and sex—are experienced as pleasurable in this part of the brain, and so we do them again and again. Sugar stimulates the release of the same neurotransmitters—dopamine in particular—through which the potent effects of these other drugs are mediated…Most of us today will never know if we suffer even subtle withdrawal symptoms from sugar, because we’ll never go long enough without sugar to find out.

Don’t be surprised if my sugar consumption decreases even more than it does today (and that I write about it). Let me be clear: I am not some obsessed health nut. I just eat more sensibly than summer 2013, when starting these lifestyle changes. I don’t diet—they’re typically ineffective. I eat heartedly and happily, but wisely.

The changes can be seen in the other posts from this series: