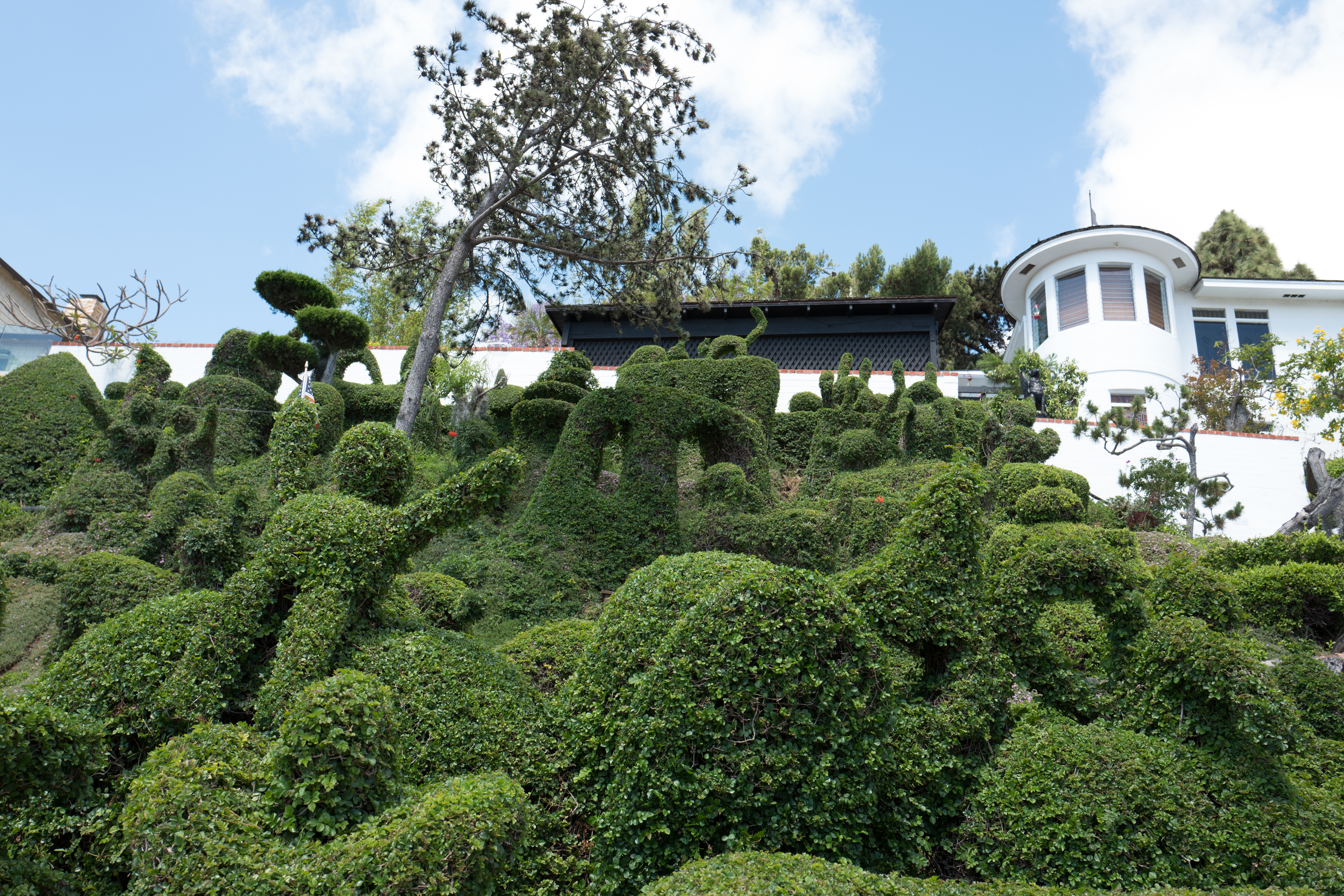 Sometimes stupidity is a bad habit—or that’s how I feel about making immensely idiotic mistakes mishandling the Leica Q today. A camera with manual controls demands that the shooter be smart enough to check the dials between outings. Last night, while hunting for subjects to add to my “Cats of University Heights” series, I set the shutter to 1/125 sec. Couple evenings earlier, motion blur spoiled several potentially good portraits of a black and white that I call Fraidy and another not yet featured. Because the digicam’s auto-mode had preferred low ISO and slower shutter speed, I chose what seemed right for late-yesterday’s lighting.

I should have sorted out my mistake this afternoon in San Diego’s South Mission Hills neighborhood. My wife had taken me on an outdoor expedition to two close-by destinations: The Spruce St. Suspension Bridge, which crosses a deep canyon in Banker’s Hill. Edwin Capps designed the pedestrian walkway, completed in 1912. I stupidly shot no photos there. Doh. From the footbridge, we drove to the “Edna Scissorhands” (e.g. Edna Harper) topiary garden on Union Street, where distracted by two cats, I turned attention first to them without checking the shutter—dumb, dumb, considering I took time to turn the aperture to f/5.6. 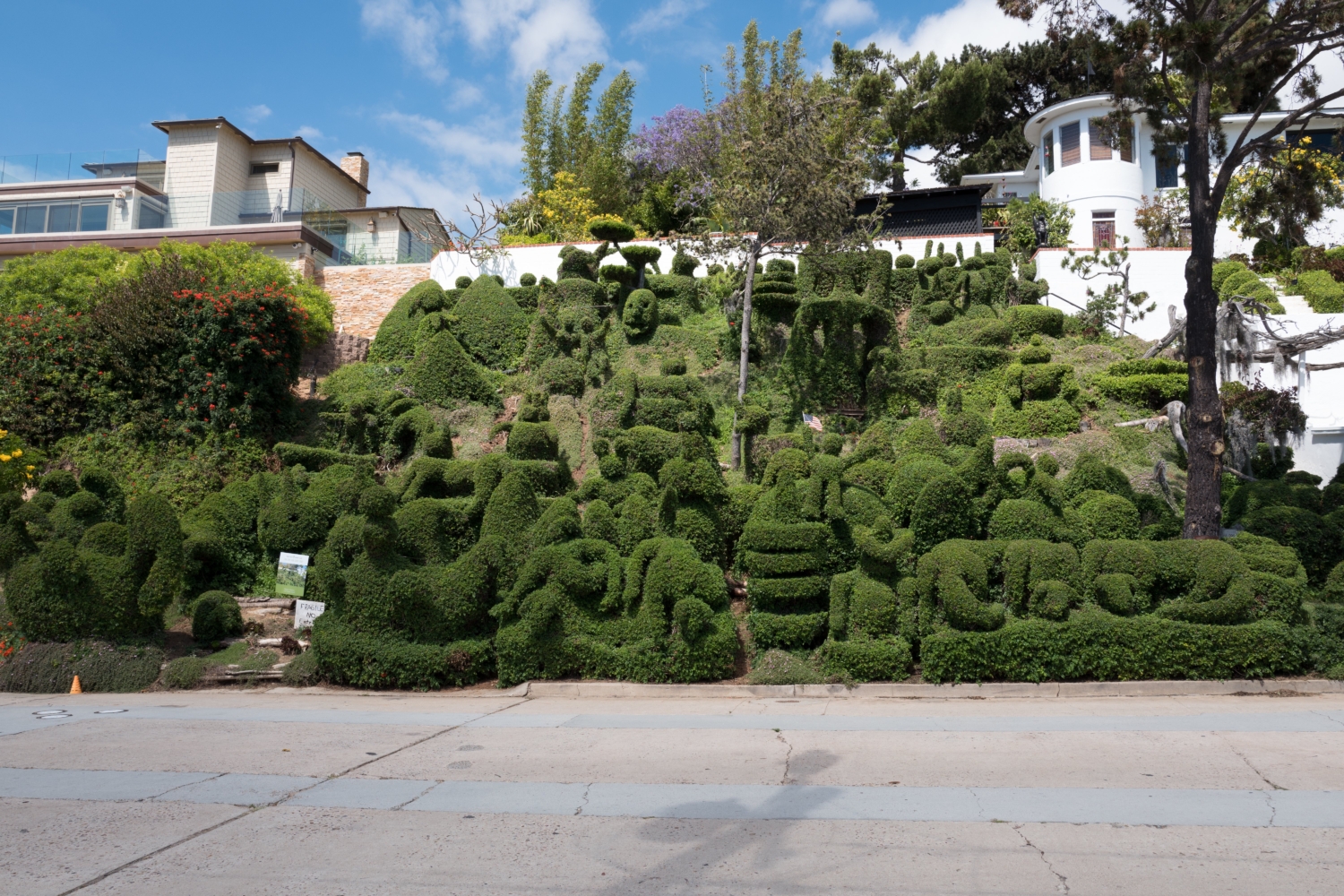 When trying to grab a portrait of the first animal, I could see in the electronic viewfinder that the photo would be badly overexposed. So I turned the aperture dial to auto, which was unnecessary. The correct action would have been adjusting the shutter speed knob instead. As such, neither cat capture came out as expected, nor the beautifully sculptured greenery crafted in style of film “Edward Scissorhands”. But these pics are good enough, and they showcase the benefits of the Leica’s 28mm wide-angle lens’ perspective. All three photos of the gardens are ISO 100 and 1/125 sec. The Featured Image is f/6.3, and the other two are f/10 and f/7.1, respectively; all around 3 p.m. PDT. 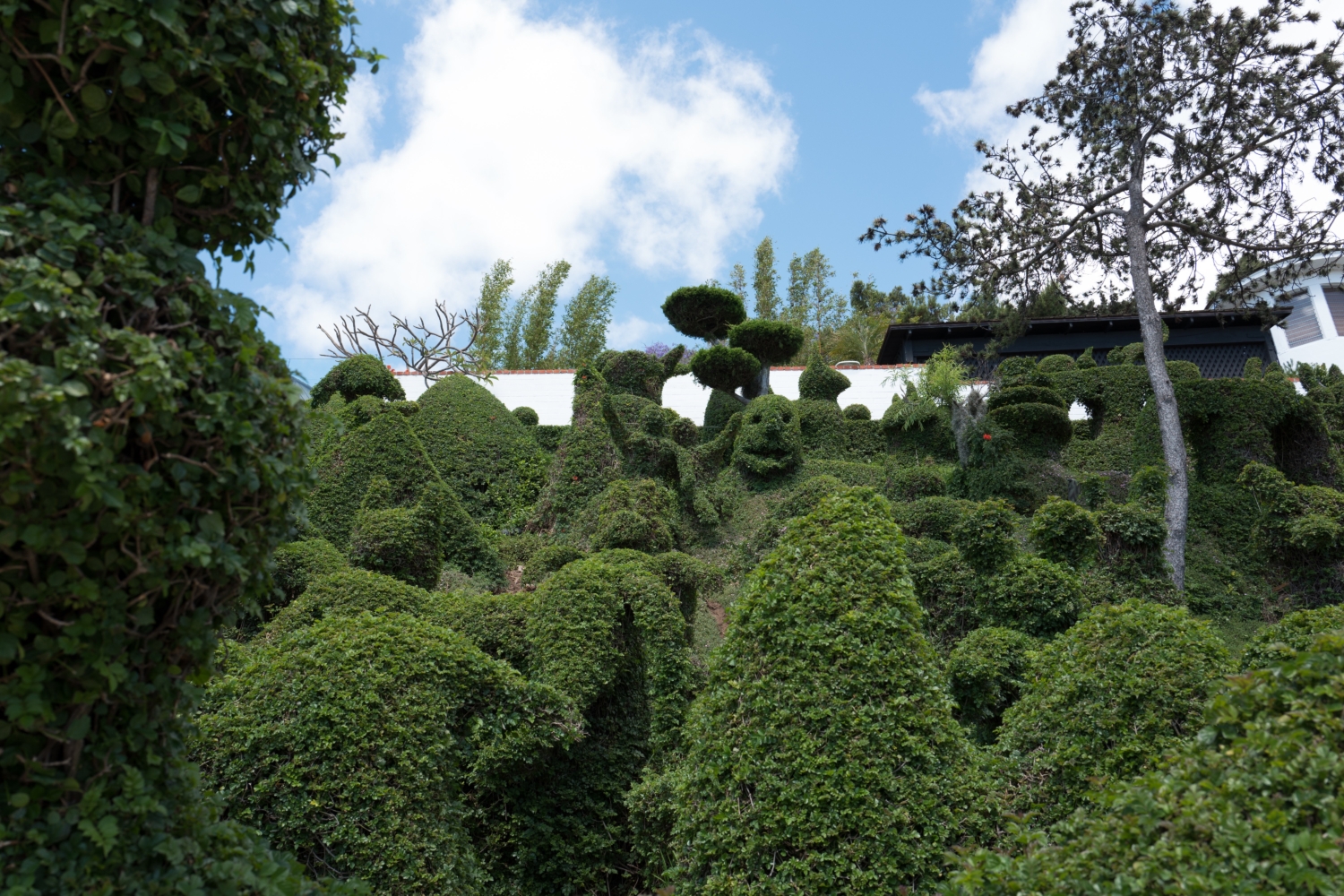 Annie spotted the cats as we inadvertently drove past our destination. Both walked around the same car and appeared to be friendly with one another. Meaning: There was no squabble about territory. The tan feline lithely jumped upon a stone wall before curling up in the shade of a bush. The black and white took refuge under a car. 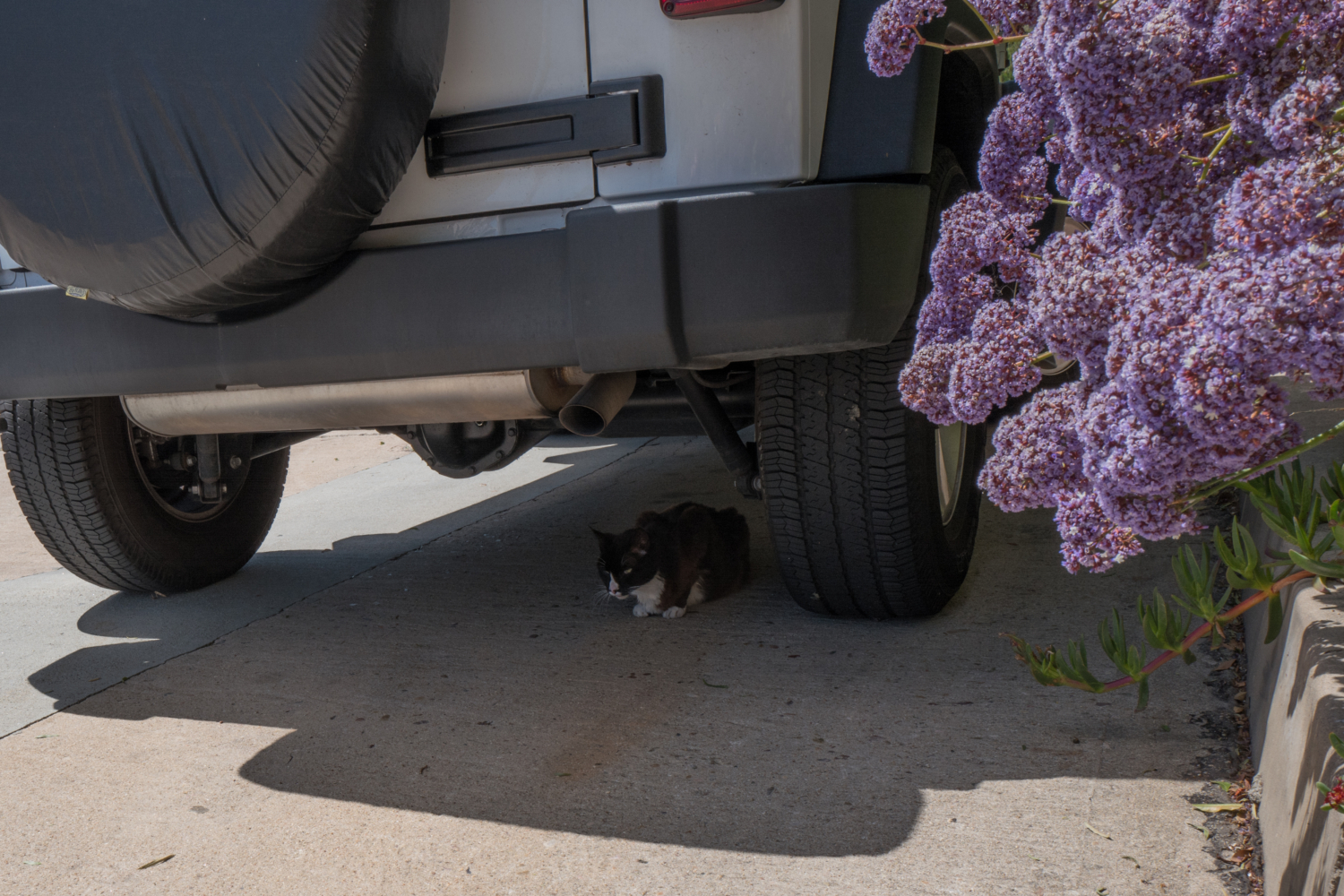 I applied the same Shadows adjustment to the skulking kitty; the crop isn’t my favorite perspective, but I wanted to remove the license plate out of politeness to the owner. Vitals: f/16, ISO 100, 1/125 sec, 28mm. 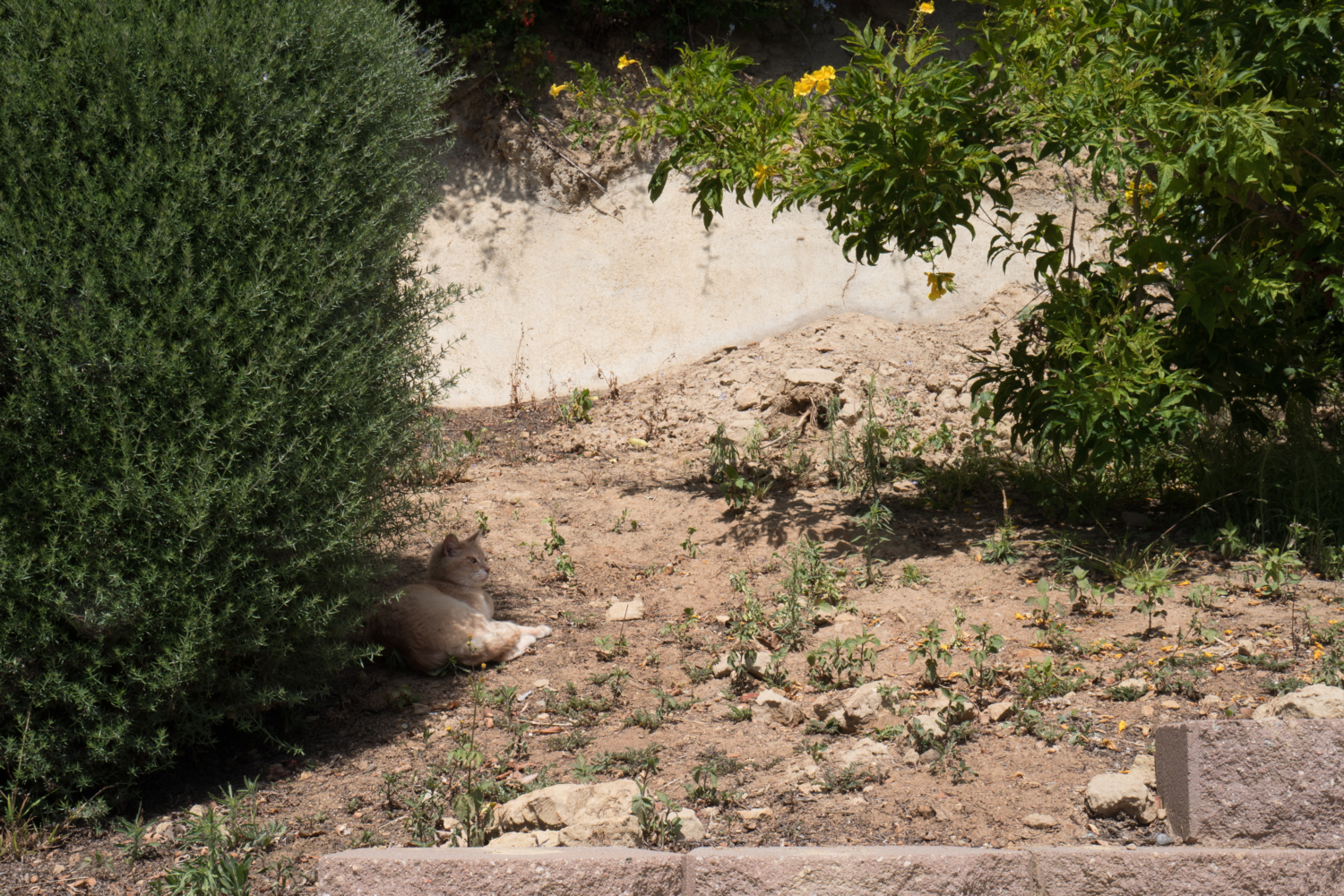