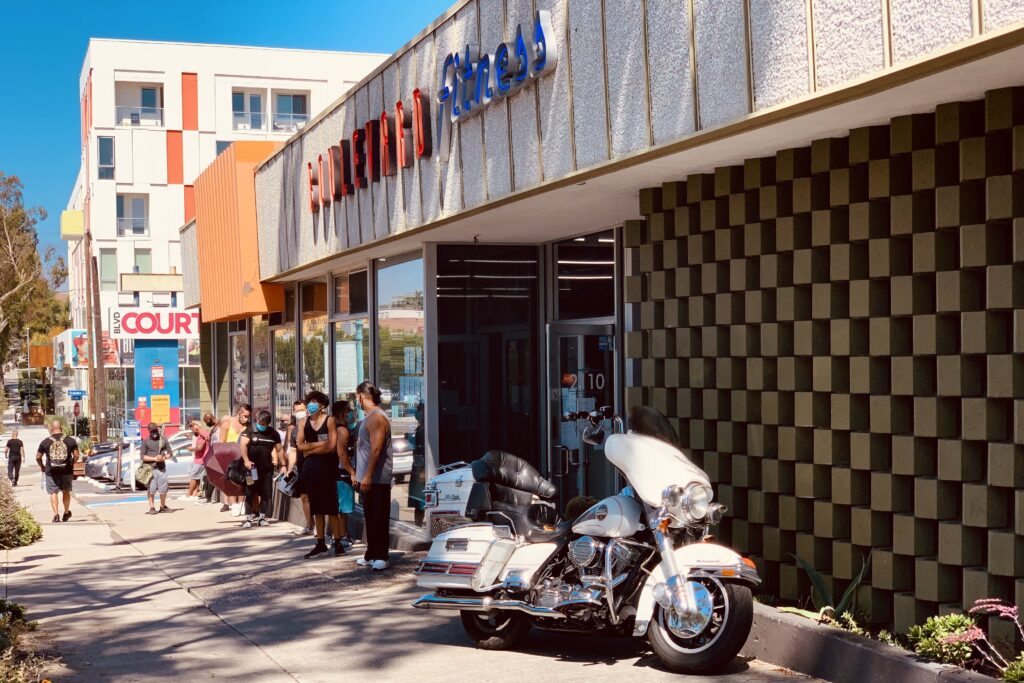 As I approached the establishment along El Cajon Blvd. from Mississippi in the direction of Alabama, a long line of buff men waited outside. Take a close look at the Featured Image and the beefy arms on some of these guys. With the Harley-Davidson motorcycle on one side of the doors and the line of apparent bar-bouncers on the other, I thought a group of free-enterprise protestors had come to protect the place from the cops.

More typically, no one waits outside the 10,000-square-foot cathedral to cardio and sweat. I more typically see slim, fit millennials, many of them women, moving freely in and out—not a waiting group of men capable of bench-pressing a city bus. The photo, taken with iPhone XS, doesn’t accurately capture the muscle-heft of most men standing along the sidewalk today. The parked Harley punctuated the ambience.

Maybe you won’t agree, but there’s an odd juxtaposition to what I witnessed. Governor Gruesome doesn’t want Californians exercising indoors because such activity might further spread SARS-CoV-2 (severe acute respiratory syndrome Coronavirus 2)—better known as COVID-19. But he doesn’t mind people protesting and rioting, which also could cause so-called “super-spreader” events. Consider, for sake of argument, that there has been a dramatic increase in the number of younger Californians testing positive for COVID-19 aligned with the incubation period from the so-called anti-racism protests.

Yesterday, at the corner of Alabama, across from the wrongly-named BLVD North Park (because it’s located in University Heights), a food truck displayed a sign that read “Black Lives Matter” and drawing of a raised fist. The arms lifting weights inside the local gym rise in defiance, too—and many of them are of color, if the men I saw this morning are typical patrons. They are quite literally comrades in arms, standing together and alongside Boulevard Fitness owner Shawn Gilbert. By their patronage, they protest for the freedom to which they are accustomed, as Gilbert does the right to keep open his small business and support employees who depend on its continuation.

If men and women obsessed about good health aren’t afraid of catching COVID-19 while working out, should the governor be?

Update, Aug. 27, 2020: My wife and I walked by Boulevard Fitness and it is closed, as of today. The city attorney sent a letter to the gym threatening legal action to recover $112,500 or more in fines.