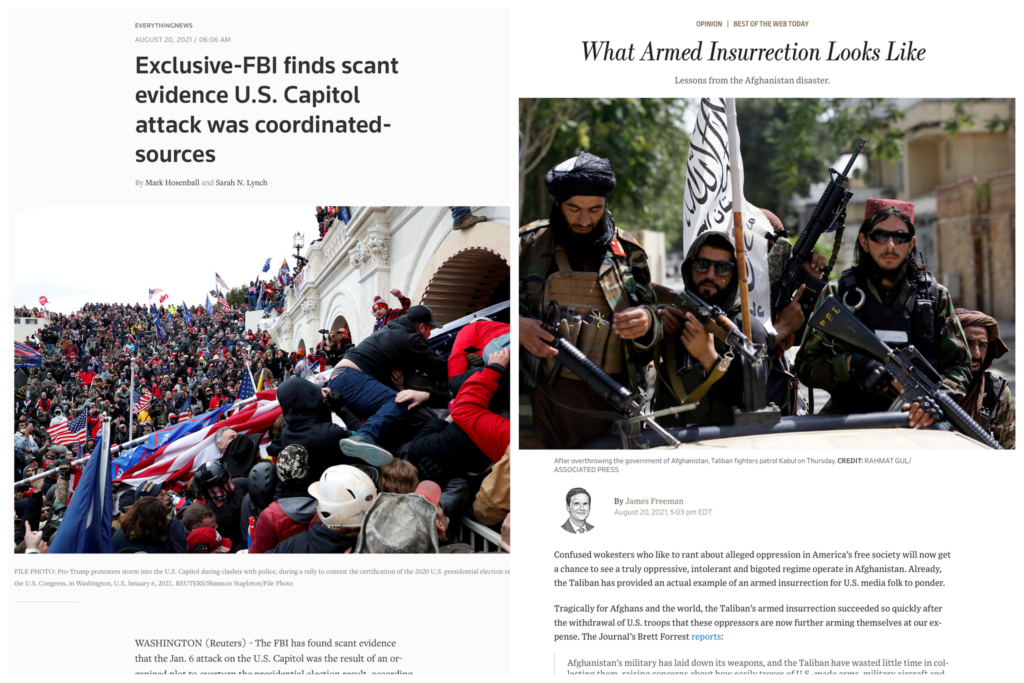 The Journal headline, punctuated by the photo of armed Taliban militia, gets right to the point: “What Armed Insurrection Looks Like“. James Freeman writes:

Confused wokesters who like to rant about alleged oppression in America’s free society will now get a chance to see a truly oppressive, intolerant and bigoted regime operate in Afghanistan. Already, the Taliban has provided an actual example of an armed insurrection for U.S. media folk to ponder…

Meanwhile in the U.S., the disgraceful riot at the Capitol is looking less and less like an armed insurrection or a coup attempt, despite the frequency with which such terms have been employed by pundits and politicians.

He refers to the same Reuters article that I do here. The headline exclusive will surprise some people: “FBI finds Scant Evidence U.S. Capitol Attack was Coordinated—Sources“. Reporters Mark Hosenball and Sarah N. Lynch lede:

The FBI has found scant evidence that the Jan. 6 attack on the U.S. Capitol was the result of an organized plot to overturn the presidential election result, according to four current and former law enforcement officials.

Though federal officials have arrested more than 570 alleged participants, the FBI at this point believes the violence was not centrally coordinated by far-right groups or prominent supporters of then-President Donald Trump, according to the sources, who have been either directly involved in or briefed regularly on the wide-ranging investigations.

The FBI has so far found no evidence that he or people directly around him were involved in organizing the violence, according to the four current and former law enforcement officials.

I recommend reading the entire Reuter’s story for yourself—the Journal piece, too. But if you do nothing else, gawk at the Featured Image. Most of the thousands of people visible outside the U.S. Capitol are standing doing nothing; none are armed; think about them in context of that headline. Rioters in the foreground are a problem, for sure—and, again, I don’t mean to diminish their breach of the building or the disruption and deaths (four) that resulted.

Now consider the Journal photo and headline, once more. Put that in context of an armed usurpation in Afghanistan, the terror that followed, and ongoing attempts to get all Americans and allies out of the country (You’ve seen the images).