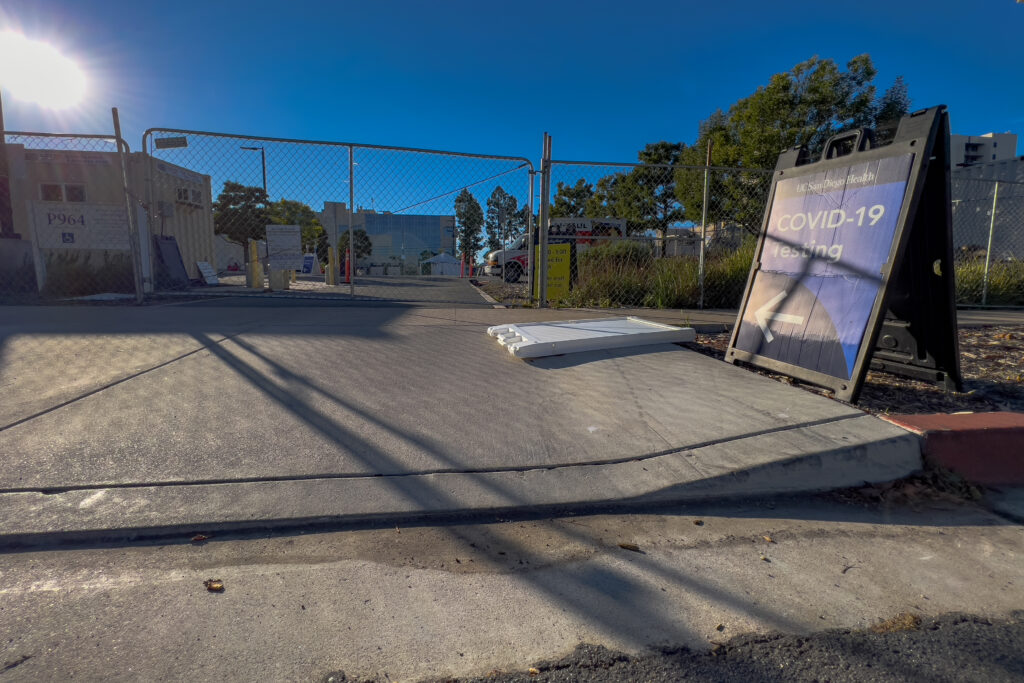 Two weeks ago today, as headlines streaked about Omicron’s discovery, San Diego Comic-Con Special Edition started at the convention center—and, woo-hoo, I secured a reserved pass. But fear-based restrictions required proof of vaccination or negative COVID-19 test. Not being fully-vaxxed, I couldn’t produce the first and per attendee regulations results of the other couldn’t be before Nov. 23, 2021. Of course, another daughter drama delayed testing on that Tuesday or Wednesday, and Thursday was Thanksgiving. So the soonest I could get tested was Friday, when SDCC SE commenced.

But with the majority of county residents vaccinated and the Delta wave seemingly receding, COVID-19 testing had wound down, too. The Featured Image, of a closed drive-up facility in Hillcrest, is demonstrative. The number of available sites was fewer than several months ago, and those I could find couldn’t provide results for three or four days. I needed something sooner, either within minutes or as long as 24 hours.

The three national chain pharmacies looked like my best option. During the online application for one (which I decided not to name), the forms required my agreeing to release my personal information to a score of third parties, private and government. So I abandoned that next-day-result option.

CVS, which I will name, looked most promising because the pharmacy offered an antigen test, which results could be available within hours. But in trying to schedule an appointment, I could find no available slot at any of the MinuteClincs anywhere in San Diego County—for the 26th or the two following days.

On Saturday, I drove to the closest CVS MinuteClinc, which was little more than a big box in a shopping center parking lot. People making appointments would drive up and be swabbed from their cars. I walked up and chatted with the attendant for about 10 minutes. She had no clients the entire time, which sure seemed like an opportunity to be tested. I was ready with the $25 fee. But she adamantly insisted that I had to schedule ahead first—if lucky enough for a cancellation. Flummoxed, I surveyed her idle test site and wondered: Why not?

I explained that no slots were available, and she wasn’t surprised: Testing was winding down across the county. Unlucky me. If Omicron had arrived two weeks earlier, more sites would have been operational. In fairness, there were some private-pay, pop-up locations in the area. But they charged anywhere from $99 to $125 for the antigen test. I was good with the CVS twenty-five buck quickie but unwilling to put out more than the $75 cost of the Comic-Con pass.

As I write, SD County health officials have identified two Omicron cases (e.g. infections)—and both individuals are considered to be fully vaccinated, meaning two shots and a booster. Make what you will about the vaccines’ effectiveness; I won’t offer opinion.

But I will say this: If, as Los Angeles Times reports, the variant was in California wastewater before the World Health Organization raised alarm, Omicron is everywhere. Everyone should be relieved that, while fairly infectious, the strain presents mild symptoms—unlike the fictitious film of the same name.