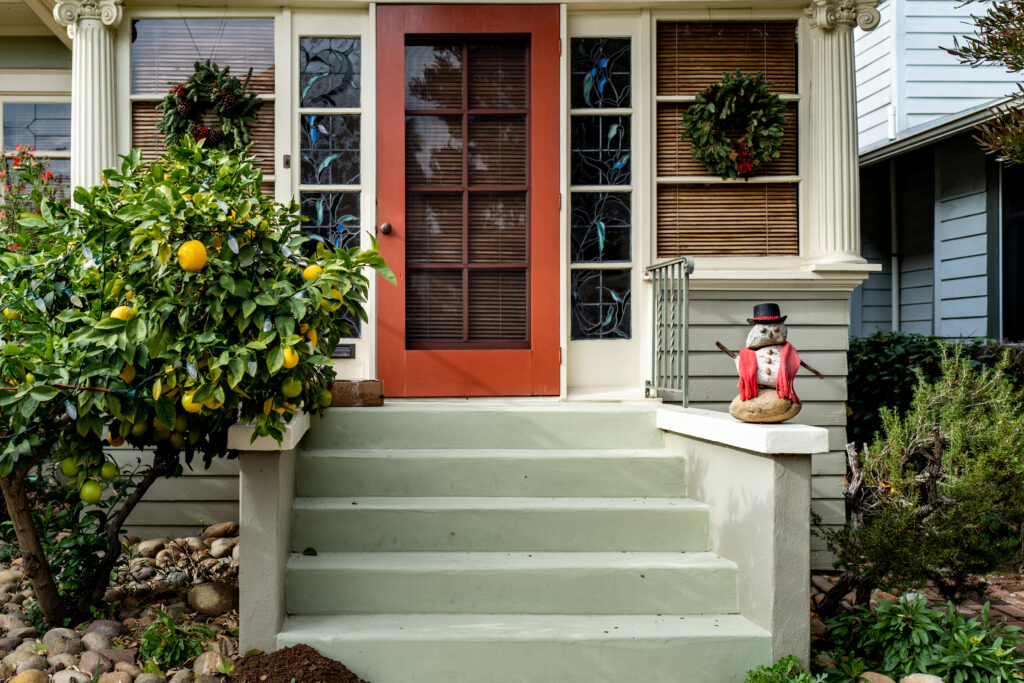 The San Diego neighborhood where I live, University Heights, is a monument to secularism. The closest Jesus comes to being depicted or referenced anywhere is half his name in Christmas, prefaced by Merry, like on the, ah, Prideful trees that I wrote about two days ago.

So on this fateful Christmas Eve, I have no religious photos to share; no crosses, no nativities, nothing other than the stone snowman you may remember from two years ago. He made a 2020 appearance on the same property but brandishing a presidential political sign—and I did not approve. The fresh Featured Image comes from Leica Q2, two days ago. Vitals, aperture manually set: f/2.8, ISO 100, 1/500 sec, 28mm; 1 p.m. PST.

Stoneman bore a cheerful grin in 2019, which is replaced with a more mournful mouth in 2021. Perhaps he represents the homeowners’ angst about SARS-CoV-2 (severe acute respiratory syndrome Coronavirus 2) variant Omicron, which based on data coming out of South Africa and United Kingdom is no more severe than the common cold but is the fear scare du jour from the mouths of American commentators, journalists, and politicians.

You’d think we all were going to die, like most of the global population does in Station Eleven, which currently airs on HBO Max (episodes four and five started streaming yesterday). The TV series is based on Emily St. John Mandel’s 2014 novel of the same name. Remember what I told you about Hollywood’s obsession with viral Armageddon?

I can’t think of anything more inappropriate for the birth of Christ (representing hope for humankind) than the “Omicron will kill us all” meme (representing humanity’s imminent demise). Of course we should know if that would be true. It isn’t. The new Coronavirus variant is a metaphor for the savior, and it should be openly welcomed and revered. Contagious as Measles but life-threatening as a common cold, Omicron is the SARS-CoV-2 mutation that (figuratively) redeems us all with natural immunity. Now there’s a gift from God to celebrate Christmas—cleverly wrapped with bow that unfolds to reveal the present.

Instead, churches cancel Christmas services. Airlines cancel thousands of flights. World Health Organization discourages families from gathering to celebrate the holidays. So during the season when we all should be together celebrating hope and new life represented by Christ’s birth, we are again separated and impaled by an endless cacophony for fear of death. How pathetically and unnecessarily tragic.

Stoneman’s expression must be appropriate then, as is the lack of anything about God during celebration of his son’s birth. Although, something seems odd to me: Don’t many people prostrate in prayer when they’re afraid of dying—or some calamity befalls them? If so, I would expect to see boundless religiosity for Christmas. Maybe somewhere, but not in this small sliver of Southern California.

Happy Birthday, Jesus! Someone should say it.