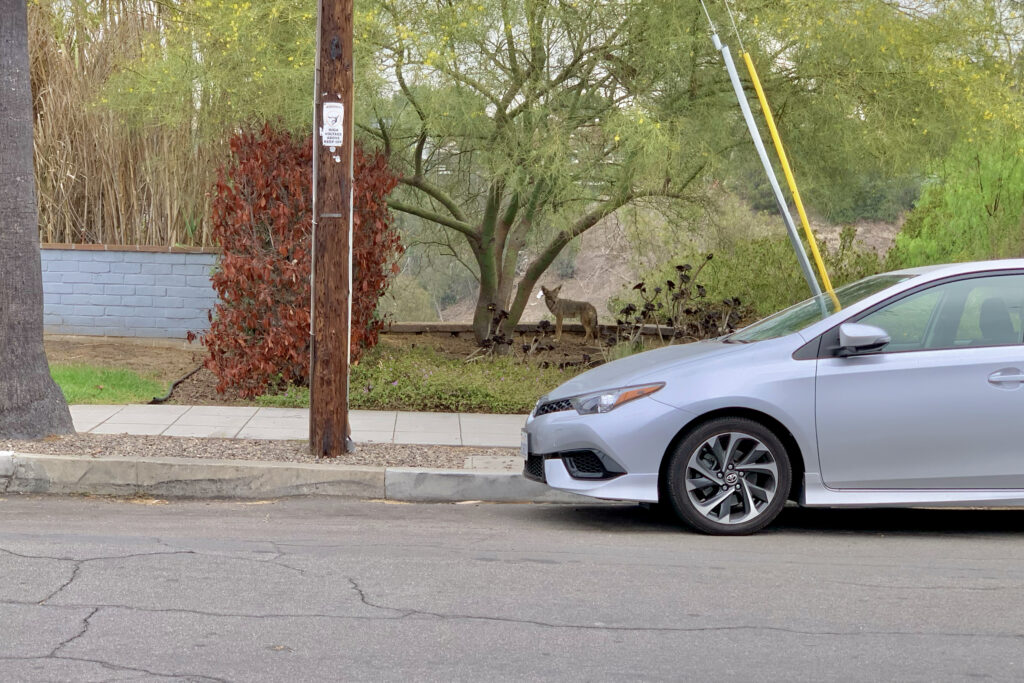 This is not the photo you are meant to see. I failed to capture the right one for you. Please accept my apologies for being too stunned and too slow to get either camera or handset out before opportunity passed. Lesson learned; I need to practice my draw, so to speak, like a gunslinger of old—or modern-era concealed carrier.

While walking along Monroe Avenue this morning, close to 10 a.m. PDT, two police cruisers, their lights flashing, slowly approached from the East. They trailed the lame-legged coyote that some locals call Notorious. My wife and I first saw him along Louisiana on Sept. 8, 2021, date of the Featured Image. Sadly. Honestly, there should have been enough time for me to get off a quick shot of Notorious, if not the cop cars.

Problem: Police pushed the predator West and outside what I presume to be the hunting range. I pursued on foot, watching a cruiser climb up One-Way Mission Avenue the wrong direction. Notorious disappeared, and the driver executed a three-point turn. Near as I could guess, the coyote, which hobbles on three legs, climbed an embankment and disappeared into an area behind someone’s property where once was, but no longer is, a feral cat colony.

As my wife and I reached Florida Street, just below where Notorious vanished, a San Diego animal control truck passed slowly by, presumably prowling for you know who. I don’t believe the crew found the beastie, but who knows.

The irony—or oddity, if you prefer: Some citizens complain on social networks like Nextdoor about police response times to calls about criminal acts, like home invasion or property theft. But, ho-ho, that slow-moving coyote with three good legs is a priority threat. Wonder who will gripe about that? Not me. I support our officers.

Now, regarding that older photo, which I shot using iPhone XS, vitals: f/2.4, ISO 16, 1/264 sec, 52mm; 9:36 a.m. PDT. Location: Panorama Drive, before one of the canyons and about seven full blocks from where Notorious vanished today. Neighbors, keep your cats in tonight, if you live anywhere nearby.