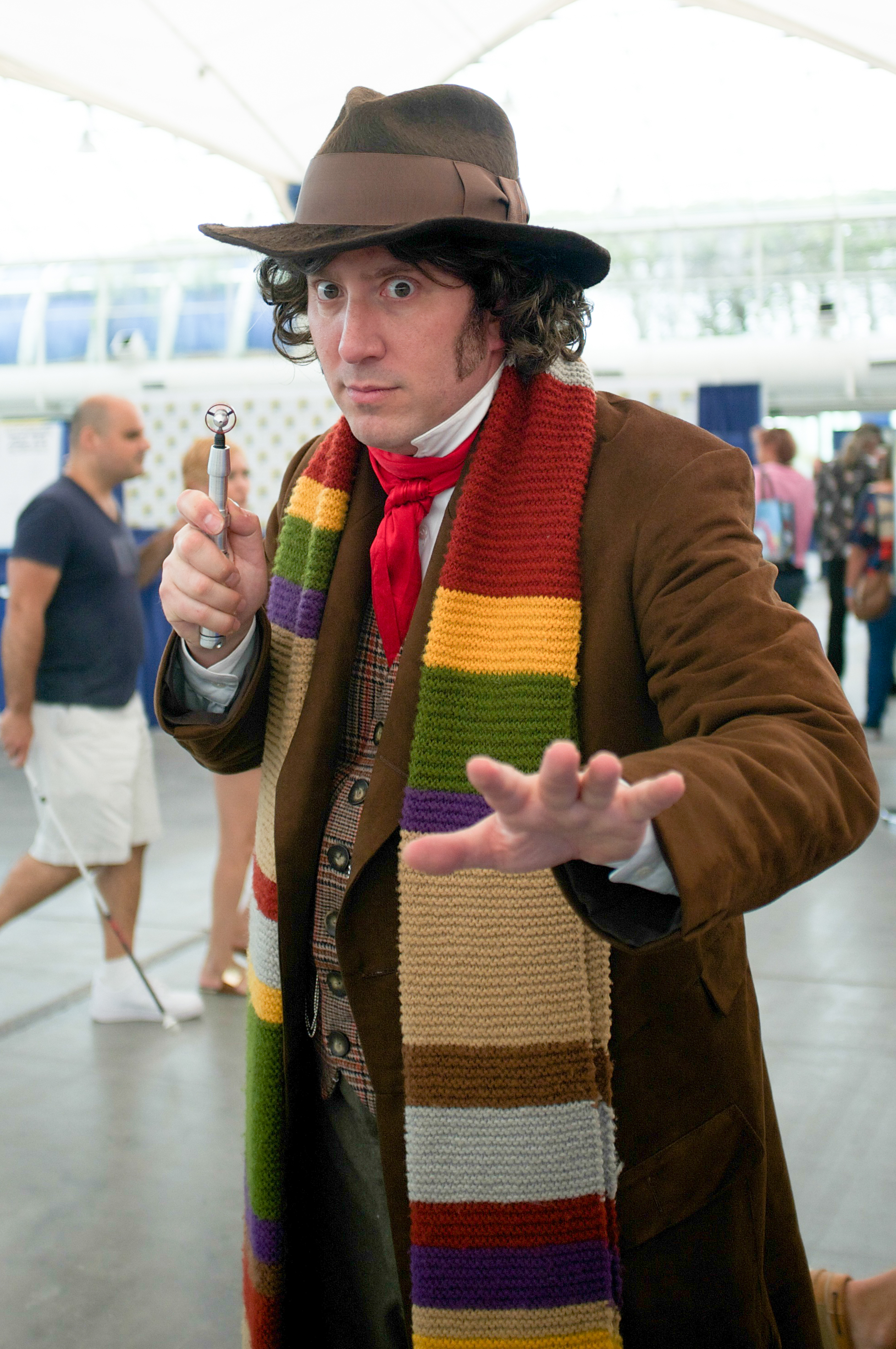 With that introduction, let’s meet The Time Lord.

My stalking isn’t just reserved for Quesada. During any given day, I make three or four trips to the upper-level autograph area to see what has-been actors are on display. I can’t resist roaming the tables and gawking at the once-famous characters—often minor, or if major, born when grandpa wore diapers. Yes, I’m arrogant, which admittedly is unbecoming of a nobody in the presence of once-somebodies.

Among the long-forgotten, as surely the short lines of fans or lack of them indicate, one surprises: Manu Bennett, who just completed a highly-successful run as Crixus on Starz’s “Spartacus” series. The New Zealander raised Aussie also appears in the three “Hobbit” movies as Azog the goblin king and break-out series “Arrow” as Slade Wilson. He is a working actor. Still, there’s no line before Bennett. I love the guy on screen and hope there’s no foreshadowing here.

As I walk away, standing near center of the room, an apparition appears. I see Tom Baker, the fourth Dr. Who. But this can’t be because Baker is 79 years old, and this man is young like I remember the Doctor. I approach first from the side and the profile view is so uncannily Baker, my breath stops. But as I circle round front and to the other side, the resemblance fades just a little. Before me stands one of the best Doctor imitators I have ever seen, from iconic scarf to hat, overcoat, vest, and mop of curly hair.

His name is Andrew Elkins. I tell him that from the profile-view, he looks like Baker. Elkins hears that a lot.

I ask why he attends Comic-Con. “I’m here to, to, to see everyone who has come to celebrate the 50th anniversary of ‘Dr. Who’”. Baker was Elkins’ “favorite Doctor growing up”. Mine, too.

“Dr. Who” is an iconic, and often cheesy, British sci-fi series that first aired in 1963. The “Time Lord” is one of the last of his kind and travels about in a blue police call box that disguises the TARDIS (Time and Relative Dimension in Space). While 2013 celebrates 50 years of the Doctor, the show did not run continuously. There is a broadcast gap between 1989 and 2005.

The series uses a gimmick to allow new actors to assume the same role. The Time Lord regenerates into someone else. The day I meet Elkins, there have been 11 Doctors. [Editor’s note: While this book was being written, BBC announced that actor Peter Capaldi will be the twelfth Doctor.]

Elkins attends his fifth or six Comic-Con, but isn’t sure which, and like the Good Doctor apparently can’t keep track of time. “This is my first for the whole weekend”—of that he is certain.

“I was highly involved with ‘Dr. Who’ fan clubs and ‘Star Trek’ fan clubs growing up. These are kind of like my people”, he says looking around the room. “I spend a lot of time getting into costume”. Besides Dr. Who, he “has Star Trek costumes, Wyatt Earp costume, pirate costumes, Renaissance fair costumes—I have a lot of costumes”.

For “Star Trek”, Elkins is more himself than any character from the series. “I consider myself a captain, but not necessarily Captain Kirk”.

He explains more about his costume choices. “I run Renaissance fairs for my real job. I help people escape reality and enjoy part of the past”. So Elkins says. But Renaissance fairs by day and Time Lording by night is past and future.

For this Con he is the fourth Doctor only. I ask: “When you dress up as the Doctor, how does it make you feel?” “Honestly, I feel like the Doctor”, he answers. “Especially Tom Baker and the scarf, even if people haven’t seen him they know that’s Dr. Who and they get excited. I enjoy putting [on the costume], and it brings me close to one of the things I am passionate about”.

Elkins shares some of the reactions to his costume. “I’ve walked around the exhibit floor and come across several people, Britons, who are like ‘Oh my God! I can’t believe you’re dressed up as classic Doctor’—and I talk to them and offer them a real Jelly Baby. They’re like, ‘Oh my God, you have a real Jelly Baby’. It helps the interaction, and I like interaction. In today’s day and age, and again that’s why I run Renaissance fairs, trying to get people out and interacting with characters, or the past, is a lot better than sitting in front of the computer and desensitizing us to what’s really out there”.

Time comes to ask the Time Lord the question asked to other fans, about people dressing up to be who they wish they could be and finding in Comic-Con a place for community and camaraderie.

“Everyone speaks the same language here. In public they may be more reserved talking about their passions about ‘Star Trek’ or ‘Dr. Who’. But here it’s a free-for-all. You interact with new people, you meet people you don’t get to see all the time. You can let your guard go and enjoy yourself, and with everyone who enjoys the same thing as you”.

He continues: “There are so many different levels. There are comic books, horror movies. You may not have the same interests as everyone else, you’ll get intrigued and learn more about things you wouldn’t necessarily have a passion for and might get interested in”.

Finally, I shift the conversation to something else top of mind, because of my conversation with Melanie Smith, the fighter. “Everyone else has another life, but yours sounds a little more interesting because it’s still kind of dress up—so let’s talk about the Renaissance fair. Whatya do?”

“I’m the general manager of a brand new fair starting in 2013, in November, called the Nottingham Festival. It’s up in Simi Valley, California”. Elkins is from there. “It’s a non-profit fair. It’s geared towards history and education but being playful at the same time. Before that I was general manager of the largest fair in California”.

The purpose: “We help recreate history. You come into a 16th-Century Elizabethan village. You step through that gate and you’re stepping into a different world, stepping back in time. In this day and age we all could use an escape of our real lives for a little while”.

The focus of Elkin’s organization is quite different from Smith’s. A few centuries might not seem like much, but it matters to groups like the Society for Creative Anachronism and Nottingham Festival. One’s focus is the Middle Ages—the other the Renaissance, which is a later period. These groups treat such demarcation seriously.

Elkins “thinks about that everyday. I was born in the `70s. Just the transition of technology—take ‘Star Trek’ as an example. Cell phones are communicators. iPads are pads. It’s amazing how fast technology keeps turning over. It’s not centuries, it’s not even decades, it’s literally years. That’s how fast it’s moving. Between the `70s and now, there weren’t cell phones…until really the `90s when they started to become prominent”.

I make another point about change, when my teenage daughter and I watched 1961 film “The Parent Trap”. “She didn’t know what a telegram was, and it was impossible to explain”—Elkins completes the thought: “Why would she need a telegram?” He laughs. “I understand that. Sometimes it amazes me how fast things are going versus how slow they were before”.

He says what I’m thinking (damn Time Lords know everything): “It’s important to look back at the history to see where we came from”. That’s where the Renaissance fair is “extremely important”.

I point out Google as possible problem, where people can search and get instant answers with little effort and even less context. “That’s what the Renaissance fair is for”, Elkins says. “It’s learning through interaction instead of just learning by reading or just glimpsing something”.

While we have been speaking, people waited to take pictures of Dr. Who. The fan has attracted others, so I take my leave, with thanks.

After Elkins and I separate, I look around the room, reconsidering my cocky attitude about the actors and artists signing autographs. If elderly Baker was here, wouldn’t someone like Elkins ask for an autograph? He is a true fan, and perhaps that’s the point I miss.

During Comic-Con 2012, I attended the “Spartacus” panel, where Bennett and others hammed on in good spirits about the final season. Two years earlier, I got T-Shirt “I fight for no cause but my own”, promoting the series. The Tee is ratty now but I still wear it, and no day passes without someone commenting positively about the statement.

Bennett is here for the fans, and they are what the Con is all about. Sure some actors feed from the attention, and Hollywood uses every panel, character appearance, or piece of swag to market movies, TV shows, and more. But the target audience is always the fans. Everyone loves somebody, and who can say what fictional character—and the actors playing them—influenced, or even changed, someone’s life. Quesada and Harley Quinn is good example.

I chastise myself and move on.