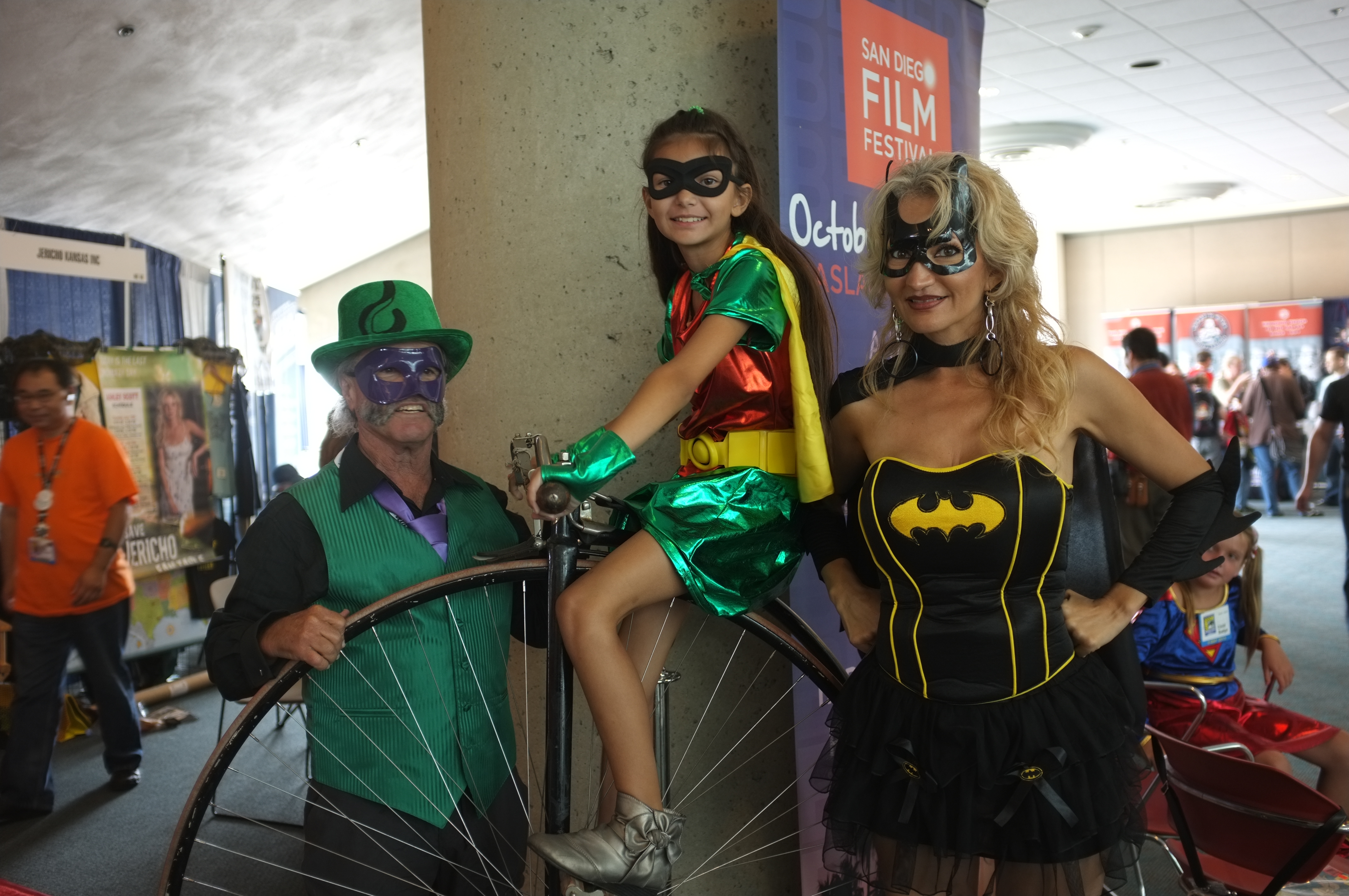 Now to business: Serialization of my ebook Comic-Con Heroes: The Fans Who Make the Greatest Show on Earth continues. I wrote the book, featuring 12 attendee profiles, following SDCC 2013. The book will release into the public domain when the dozen chapters plus one publish here, every Saturday: On July 8, 2015, after my current commitment with Amazon KDP Select ends. They are, so far: The Dark Knight, The Fighter, The Collectors, The Academic, The Nerd Culturist, and Andrew Bell, The Writer.

With that introduction, let’s meet The Bicyclists.

Bell and I go onto a terrace to shoot his photo. After we separate, I walk back inside the building and down to the indoor Mezzanine leading to the outside area where the fighters parlay. I pass a family of Batman characters—the Joker, Batgirl and Robin. Out of place with them: A big-wheeled bicycle, like the one from 1967 TV show “The Prisoner” (Granted, I haven’t seen one of these bikes for awhile).

I meet Rick Persky, Brandy Lordigyan, and her daughter Mercedes. They sit on three chairs, looking, well, lost, like they don’t know where they’re supposed to be.

“We were invited to come this year”, the adult Lordigyan says about bringing the bicycle—a penny farthing—onto the exhibit floor. “We came last year, and everybody loved it, but we were walking down there and the floor manager threw us off the floor”. I assume there’s no problem now because of the invitation. I’m mistaken. “We tried to tell him we were invited, but the floor manager made us leave”.

That explains the lost looks. The bicycle is now like a ball and chain. There’s no place to take it.

Persky and Lordigyan are founding members of the San Diego Penny Farthing Club. “We have big-wheeled bicycles, old British, and we ride them all over San Diego County doing charity parades and benefits”, Persky says. The club came to be “because Brandy noticed that when we ride our bicycles people smiled—and that it’s a contagious smile”. They’ve been riding the mis-sized two-wheelers for 15 years.

“Mercedes has her own penny farthing, and it has training wheels on it”, Lordigyan laughs. The girl is nine years old.

The penny farthing is among the earliest bicycles. The name derives from the old British penny and farthing, two coins when placed side-by-side remind of the mis-sized wheels.

The bicycle’s popularly lasted only about two decades, falling out of favor around 1890—that is in Britain. The penny farthing came to the United States later. Design is principal reason the bicycle lost appeal.

“These were the original racing bicycles”, Persky says. “The big wheel in front, the larger the circumference, the faster you go. The engineer, with rather tunnel vision, made a large front wheel to go fast. He had no concept of gearing”.

Concerns about safety—falling off headfirst—and introduction of the bicycle chain, which brought similar benefits with smaller wheels, ended the penny farthing’s short-lived popularity. Still, I’m puzzled why anyone would ride the over-sized bicycle more than 120 years later.

“We bring them to Comic-Con because people are so happy to see them, especially the older people”, Lordigyan says. Yeah, I wonder how old. Surely anyone aged enough to have ridden one as a kid must be dead. “Last year a man who was 80-something”—“eighty-six”, Persky interjects—“we put him on a penny farthing and he almost started to cry. So we almost started to cry”.

But the bicycle also appeals to 21st-Century Americans who are overwhelmed by rush-rush demands. They are called back to another time, when life wasn’t so frenetic. “Penny farthings are slow-riding bicycles”, Persky asserts. “The concept is to slow down just a little bit. Take the pace of life and slow it down”.

Perhaps, but this was at one time a racing bicycle.

The club rides penny farthings through San Diego’s Balboa Park, which coincidentally is less than a 3-kilometer bike ride from my apartment. Persky invites me to participate in a Tuesday meeting at the San Diego Velodrome. There penny farthings take to the track, and Persky encourages me to mention one rising racer: Guy East. “He rides one of my 48-inch penny farthings—that one right there”.

I ask about the Batman character costumes, which look out of place with the old British bike. Persky is the Joker, which suits his chatty, comedic character.

What about their other lives—the real ones?

Persky is a retired U.S. Department of Agriculture field biologist. Lordigyan owns a pest-control business. I studied biology, and tell him so, but pursued no career in a field then ranked among the 10-worst professions for the next decade. Persky understands. “After graduation, no jobs available in biology, my first career, 17 years, senior advertising copywriter”. He then finally worked in his chosen field.

“I also collect movie cars”, Lordigyan chimes. “I have the mystery machine from ‘Scooby Doo’”—I interrupt: “You mean like real cars?” She answers “Right, yes. We have the General Lee, the real one, from the ‘Dukes of Hazzard’. I have a Trans Am from ‘Smokey and the Bandit 2’. I have a Cadillac from ‘Lemony Snicket’ with Jim Carrey. I have a replica of the Andy Griffith car. We have the time machine from ‘Back to the Future’, and we have a movie car club, Charger Steve’s Starz Carz”.

Ms. Lordigyan emphasizes: “But the penny farthings are my favorite—over all the cars”. She laughs. So how does that explain daughter Mercedes’ name then?