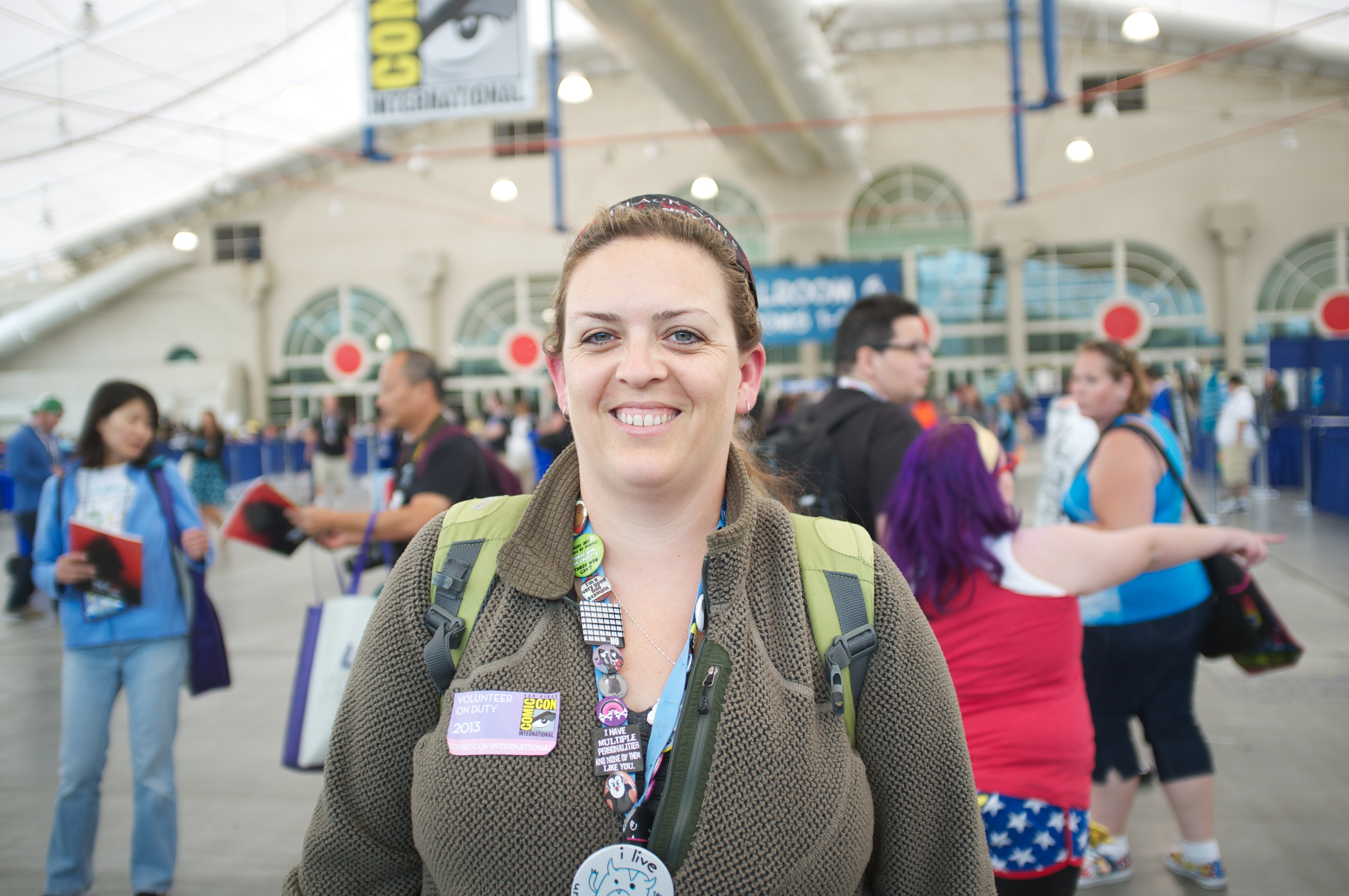 Three more profiles, and the conclusion, remain before I release my ebook Comic-Con Heroes: The Fans Who Make The Greatest Show On Earth into the public domain, on July 8, 2015, after my current commitment with Amazon KDP Select ends. To recap: The tome features 12 attendees from the 2013 San Diego convention. This year marks my seventh, but I am a paying participant; for reasons I don’t understand, my press credentials weren’t recertified.

So far we have met, in order of appearance: The Dark Knight, The Fighter, The Collectors, The Academic, The Nerd Culturist, The Writer,The Bicyclists, The Heroine, and The Time Lord. They represent a surprising cross-section of Comic-Con attendees, ranging from a toy anthropologist to a hopeful future storyteller. They’re all worth your attention. Place look back.

With that introduction, let’s meet The Volunteer, whose role at Comic-Con cannot be understated for its importance.

Evening of the third day, I’m the fan. I wait in line for the “Strike Back” panel. Cinemax co-produces the action series with Sky1, the original broadcaster. “Strike Back”, based on former SAS commando Chris Ryan’s novel by the same name, follows the exploits of British Intelligence group Section 20 and sergeants Michael Stonebridge and Damien Scott, played by Philip Winchester and Sullivan Stapleton, respectively.

The television program is a man’s man’s delight, with fierce action and sex, made more realistic because the principal actors perform many of their own stunts. So I am surprised to stand in line behind a maternal-looking woman wearing a “Strike Back” Tee and bulging backpack. She doesn’t meet my stereotype of the average viewer. I expect men. Besides, my wife finds most shoot-`em-up dramas to be too violent; she doesn’t watch many. So I just assume most women are the same, but the surprising number of ladies in line proves me wrong.

Anjeannette McRoberts is former military, which explains some of her interest. We talk casually in line, but part ways when entering the room, for what is my most enjoyable panel of the Con. We all get coupons for free T-Shirts, but this means traipsing over to the Hilton to redeem them. Amazingly, McRoberts and I end up in line together. Again. I regard this as sign for formal interview.

This is her fourth Con, “and second year as a volunteer. I started volunteering last year because the passes sold out so quickly that I didn’t have another option”. However, she put a request to volunteer before failing to get a badge, as the service spots are offered first. “I made that choice as a precaution, but ended up being a volunteer”.

“It’s not bad”, McRoberts says of volunteering. “You can do anything from line management to handing out programs, or monitoring who goes in and out of rooms—checking passes, that kind of thing. For three hours, to be here with everybody, it’s pretty good”.

Now that I understand how she comes, the question is why. I would never have guessed. “We have a book club online that started for a bunch of friends, because of ‘True Blood‘. We had a friend who wanted to come one year to have the whole experience. The rest of us decided to come as well, trying to get into the ‘True Blood’ panel, so we could all be there together for the show. It became an annual thing. This is my third year with the group’.

“True Blood” is HBO’s vampire soap opera, which is based on a vampire book series by Charlaine Harris. She has published one a year—all with “Dead” in the title—since 2001.

At a time when Facebook is supposed to be the social network for engagement, McRoberts and her other book clubbers acquainted on Twitter. “We had never met each other before”. Comic-Con is where “we get to see each other once a year”. The women come from all over the states—California, Georgia, Maryland, and North Carolina, for example.

“Obviously you’re more than just about ‘True Blood'”, I interject. “Absolutely”, she answers. “Usually if we’re in Ballroom 20, we try to go there the whole day”.

Many of the headliners take place in Ballroom H or 20 and getting in often means waiting several hours, and there is no guarantee of admittance. The women get into line early. “If you want to do it, you do it, and try not to be too grumpy about it. It’s all fun”.

“In a way you’re a modern Comic-Conner”, I assert, referring to her interest in TV shows like “Strike Back”, “Supernatural“, and “True Blood”. “You’re not coming for comic books. You don’t come for dress-up cosplay”.

She interrupts: “I do come for books, though. There are so many authors who have books here, and then also…Random House has a lot of their books that are free. When they have new books in a series, they want to have people interested in them, so very often they’ll give you samplers or the very book itself”. She mentions Penguin as another big publisher. “I got a lot of books”.

Many people come to Comic-Con for the freebies, which for content publishers is free publicity. “Swag is always fun to get”, she says. “So you’re a swagger”, I interject. “I do get a lot of swag, yes”.

McRoberts looks forward to more annual book and swag pilgrimages, but worries. “I just hope it doesn’t get so crowded that you can’t even get in here as a volunteer”.

By this time, we have moved into a parking garage and the line is enormous. I decide to pick up my T-Shirt the next day. I head off to catch the 15 bus home.

When I get there and review the days’ interviewee photos, McRoberts’ are all blurry. I have a big problem.