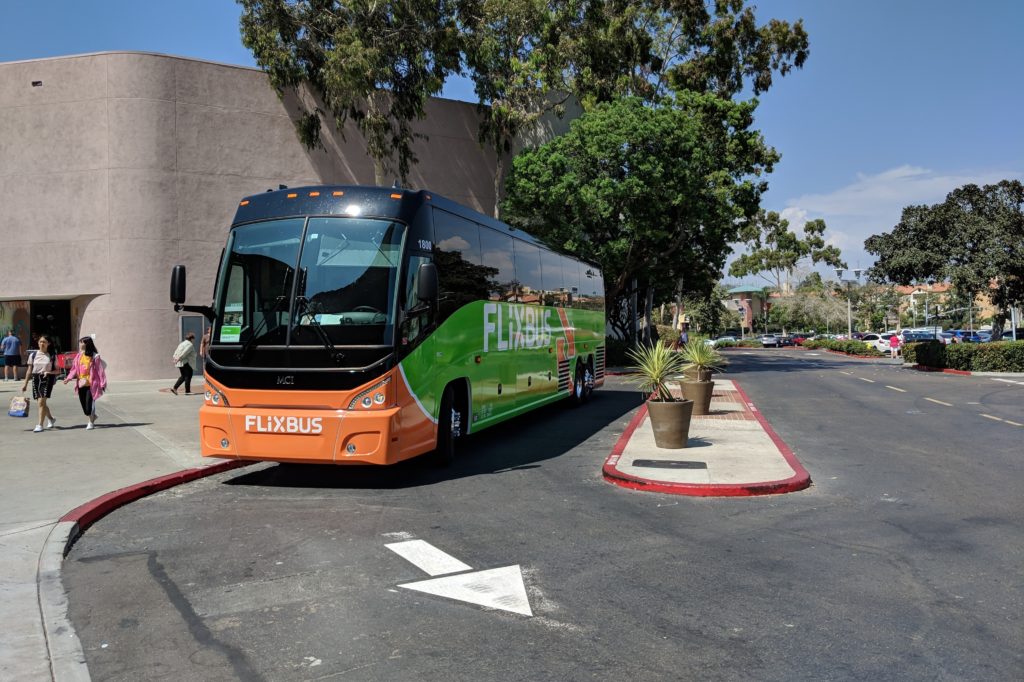 FlixBus stops at three different Westfield Malls in the San Diego area: Declining—but not dead yet—Horton Plaza (downtown); Mission Valley (where I was); and UTC (La Jolla). If any one of the backpack-toting travelers waiting to board was older than 25, then I’m a 30 year old. With a full head of hair! The point: FlixBus has battened down its clientele to a data-marketing-driven social science.

Prices and travel times beat the hell out of Greyhound, which has got to look like grandaddy’s carriage by comparison to FlixBus convenience and comfort. Cheap fare from San Diego to Los Angeles, at 11:25 p.m., is $4.99 base plus two-buck service fee. Promised travel time: Two hours and 15 minutes. Big spenders pay $14.99 base for the privilege of riding during prime morning or evening hours. Oh, did I mention that those are weekend rates? Travel any scheduled time this coming Tuesday, by comparison, and pay $4.99 (plus two bucks). Oh yeah.

By contrast, Greyhound’s lowest fare for the weekend is $14 Economy ticket and as much as 21 bucks during prime-time evening. But like FlixBus, weekdays cost less. Upcoming Tuesday: $10, which is still about three bucks more than FlixBus after the chintzy service fee is added.

Got to say, with sassy-colored FlixBus branding and all the wrong connotations around “Grey”, the, ah, older carrier should change to a name with more youth appeal. “The Hound” would be perfect, by the way, in dog-loving California and the other Western states where FlixBus travels.

Going back to “Grey” in the established carrier’s name and thinking about older folks who move slower—well, you can see those connotations and how they might apply negatively to long travel times. Right?

Got to say that my next long-haul bus trip will be orange and green rather than grey. But I’ll slink down in the seat and cover my face with a wide-brim hat, under which I will watch movie “Logan’s Run” on my smartphone.

Note: The headline is from Replacements song “Kiss Me On the Bus”.