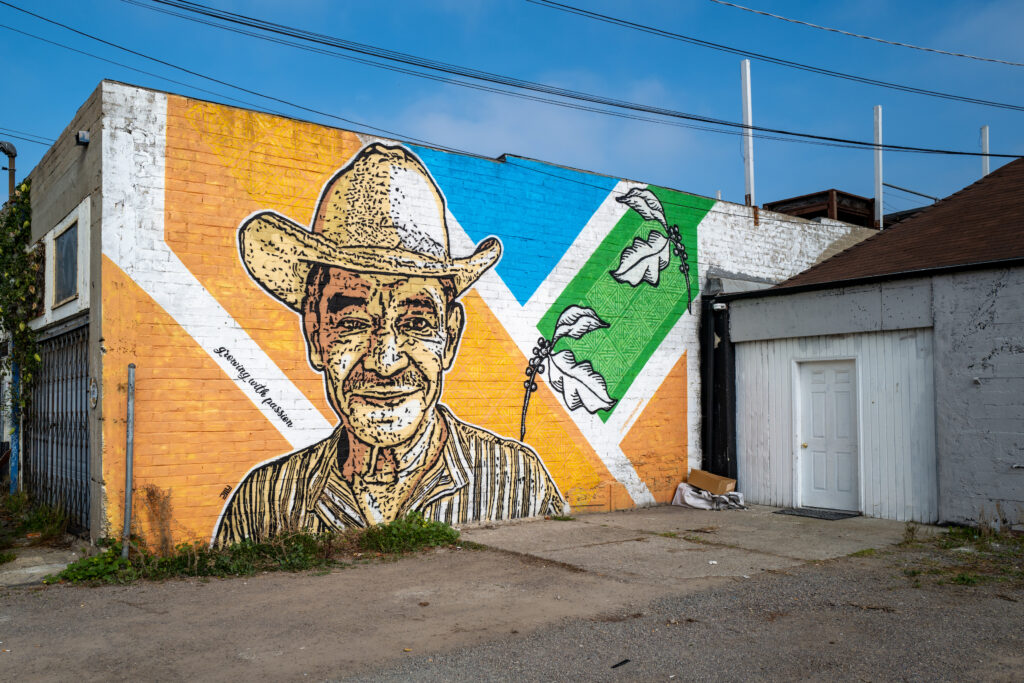 Whenever walking by this mural, I often regret not photographing the lively, colorful Yipao Coffee outdoor café that once occupied this location. More importantly: What the place displaced—trees and lush green space that the (permanently closed) florist had used. Hence the irony, if you don’t see it yet, of “growing with passion”; because all that remains is dirt, on top of which vehicles park. Nothing green grows, nor the vitality of human interaction.

In late June 2018, I shared about the departure of Florabella, which had to abandon its 24-year commercial space after the landlord informed the owner that rent would triple effective July 1. I wondered: What will replace the florist? Well, Yipao took up residence in the not-long-later clearcut corner area. Interesting aside: John Adams disappeared and was discovered to be accidentally locked inside the closed floral shop, which Yipao used; perhaps for storage. He is among the “Cats of University Heights“; June 2019.

Six months later, the Columbian coffeery closed. A letter to customers, in December 2019 explained: “We had to make the extremely difficult decision to not proceed with our expansion at this location”.

Somebody surely was lucky. Unbeknownst to most everyone outside of China, Novel Coronavirus—later named SARS-CoV-2—spread around the globe. In late-January 2020, the Communist nation locked down the area in and around Wuhan. World Health Organization declared a pandemic on March 11, followed here in California by a statewide shutdown. The restrictions would have likely devastated Yipao’s business in the outdoor location.

Not long later, Yipao emerged from within Kairoa Brewing Co., with a sidewalk-facing coffee bar that drew long lines for the caffeine-desperate. Customers could get their brew while socially distancing, and the business operated within the stiff COVID-19 restrictions imposed by Governor Gavin Newsom. The place bustled.

Another aside: In October 2020, I shared a photo of the unusual delivery door art behind Kairoa. Speaking of unusual, what stranger mashup than two different kinds of breweries from far-flung countries: Columbia and New Zealand. Who would have guessed? Well, hell, does that collaboration qualify as “growing with passion”?

Finally, the retail space once occupied by the florist remains empty. Someone please explain to me the financial sensibility of driving out a long-time paying tenant and replacing it with nothing for three-and-a-half years of lost revenue.