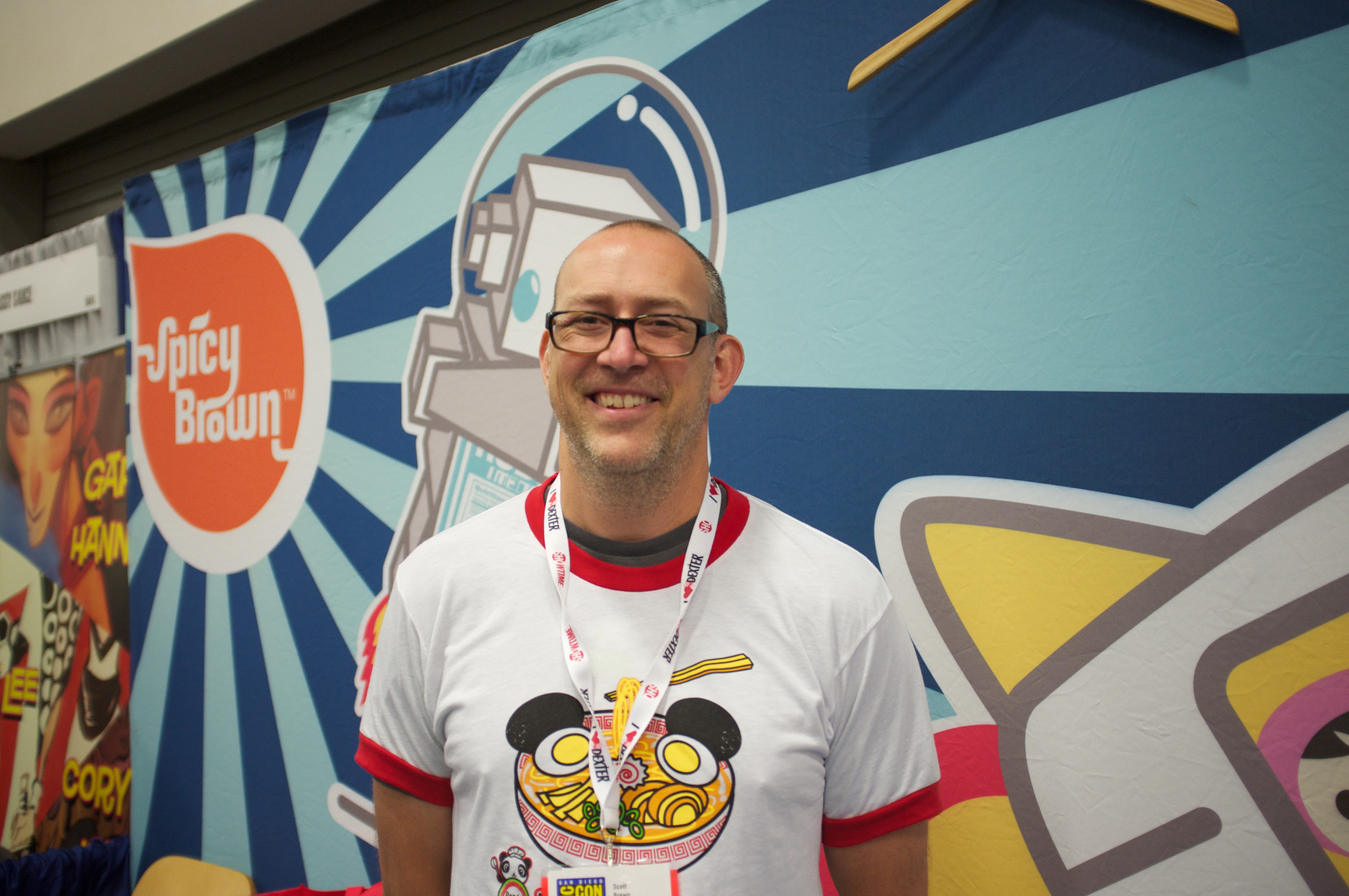 Serialization of my ebook Comic-Con Heroes: The Fans Who Make The Greatest Show On Earth rapidly winds down. With today’s installment, three remain, before I release the 2013 tome into the public domain, on July 8, 2015, when my current commitment with Amazon KDP Select ends. The other profiles, in order of appearance: The Dark Knight, The Fighter, The Collectors, The Academic, The Nerd Culturist, The Writer,The Bicyclists, The Heroine, The Time Lord, and The Volunteer.

I interviewed the last two Comic-Con 2013 attendees on the final day, for which tickets cost a little less and when San Diegan families flow into the conventions center. You can only really appreciate what the Con represents, as a cultural phenomenon, by mingling with the last-day crowds.

With that brief introduction, let’s meet The Vendor.

Family Day, Comic-Con’s last, is my favorite. The convention center fills up with locals, and most Hollywood stars have left the building. Day four is all about the fans.

There’s energy in kids’ passions, pride parents take in them, and the delight and enthusiasm families share together. Groups of friends, many of them teens or young twentysomethings, also are plentiful; their laughter and goofiness is infectious. Then there is the sense of relief rising from many exhibitors, who see the end in sight of another frenetic and exhausting Con.

I nourish off the lively atmosphere like Superman might from the yellow sun. Most of my time is spent in the exhibit hall, soaking up the energy and visiting vendors. The final day offers something else: Exhibitors give away more stuff and sell real merchandise cheap rather than pay to ship it out. There are deals to be had, and I’m the shark, constantly moving, hunting them.

One vendor grabs my attention more than others because the backstory is different than my expectation, and there is meaning to me.

Some background: Fifth grade was difficult for my daughter. She missed 40 days of classes, but still stayed on the honor roll, and asked that we homeschool her thereafter, which we did through the first year of high school. Homeschooling permitted her to competitive ice skate and to indulge her passion for Japanese art, culture, manga, and language, which she started studying in sixth grade and continued for three-and-a-half years.

During 2005, while searching websites for a Japanese-themed birthday present for my daughter, I stumbled onto Spicy Brown, which offered classic Tees with “Kokeshi Ink.” designs. I purchased several then, and from the company’s booth during the National Cherry Blossom Festival, Washington, DC., over the next two years. But we relocated to San Diego in October 2007. My next Spicy Brown booth sighting wasn’t until Comic-Con 2009.

Everything about the Spicy Brown website and booth speaks women, and they are the sellers and buyers most seen at the Con. So I’m surprised to come up to the 2013 booth and see not women sellers but a lone man—trim and fit, with big glasses and several days growth on his face that is about the same length as his close-cropped mop.

I meet Scott Brown, whose name is the first surprise. “I’m the Brown, my wife is the Spicy”, he tells me. I never expected the company name to derive from a person’s, nor for the operation to be a family-run small business.

In my imagination the brand name had more colorful origins, like partners about to start a new company and they are unsure what to call it. They go out to Japanese lunch but the Teriyaki meal is over-seasoned. One man looks down at the plate and blurts out: “Spicy Brown”. Okay, the real story is more interesting.

I ask why he comes to Comic-Con, expecting a pat answer about selling stuff. Brown’s response is better.

“I married into a crazy family”, he says. I interject: “Who doesn’t?” Brown continues: “The family is really into pop culture. They’re big Hello Kitty fans”. Someone steps up to buy something, one of many sales interruptions, and Brown loses his train of thought (Hey, selling is a good distraction).

“My wife and I started Spicy Brown”, he resumes. “She was working at Sanrio at the time, and she knew two people working for Sanrio—the Hello Kitty company—and we thought it would be great to make products with their own designs. After work, they would go home and make their own art, and we would take that art and put it on products—T-Shirts, wallets, handbags, that kind of stuff”. (I buy a wallet for my daughter’s birthday.)

Spicy Brown is one of the second-generation dot-coms, going online in 2003. Back in the late-1990s many startups attracted investors and seemingly everyone had a business plan and no means of making a profit. But by the turn of the century, the dot-com boom went bust, precipitating two years of global recession and putting many people, particularly in Northern California, out of work.

“The initial idea is that it was going to be just a part-time thing, to keep busy on the weekends”, Brown says. “But the first day I picked up product to make actual shirts, I went into work and got laid off my web job”. He committed full-time to Spicy Brown, “and we started doing events in the LA area. Friend of ours told us about Comic-Con, so we came down in 2006 and did awesome”. Spicy Brown rented a larger booth the next year, and sales were even greater.

I tell him about buying from the Spicy Brown booth in D.C. “Yes. We go around the country. There are other Comic-Con events…and there are anime events, like Anime Expo, there’s Otakon—there’s all these Japanese-type festivals. We’re zipping around doing that quite a bit”.

Brown is a “Con connoisseur”, having tasted many events, so I ask what he likes about the San Diego convention. “I’m not a crowd guy, so it’s a little tricky for me. The only way I could come is I have a booth and my little safe space”. He laughs, then offers more meaningful reason. “I do like people watching, and there’s a huge variety of characters that go by. It’s great entertainment. I can people watch all day long”.

That’s among my reasons for coming to the Con and tell him so. “Some people come in different costumes everyday”, he says. “It’s crazy”.

I ask who then. “That’s a fun one. Our product really appeals to a wide age-range. In business school they tell you ‘Oh what’s your target market—it has to be like 18-to-35 age group’. But that doesn’t really work for us. Girls all the way to 85 will like it”.

My family is case study confirming his point. I bought my daughter her first Spicy Brown Tee as a Tweener and at 19 she still wears the designs. Same is true of my 50-something wife. Brown asks if my daughter “is into Japanese culture” and I explain that her interest goes so far as studying the language.

“Anyone who is into Japanese culture, or Japanese food in particular, is our customer—into cute things and yummy things”, he says.