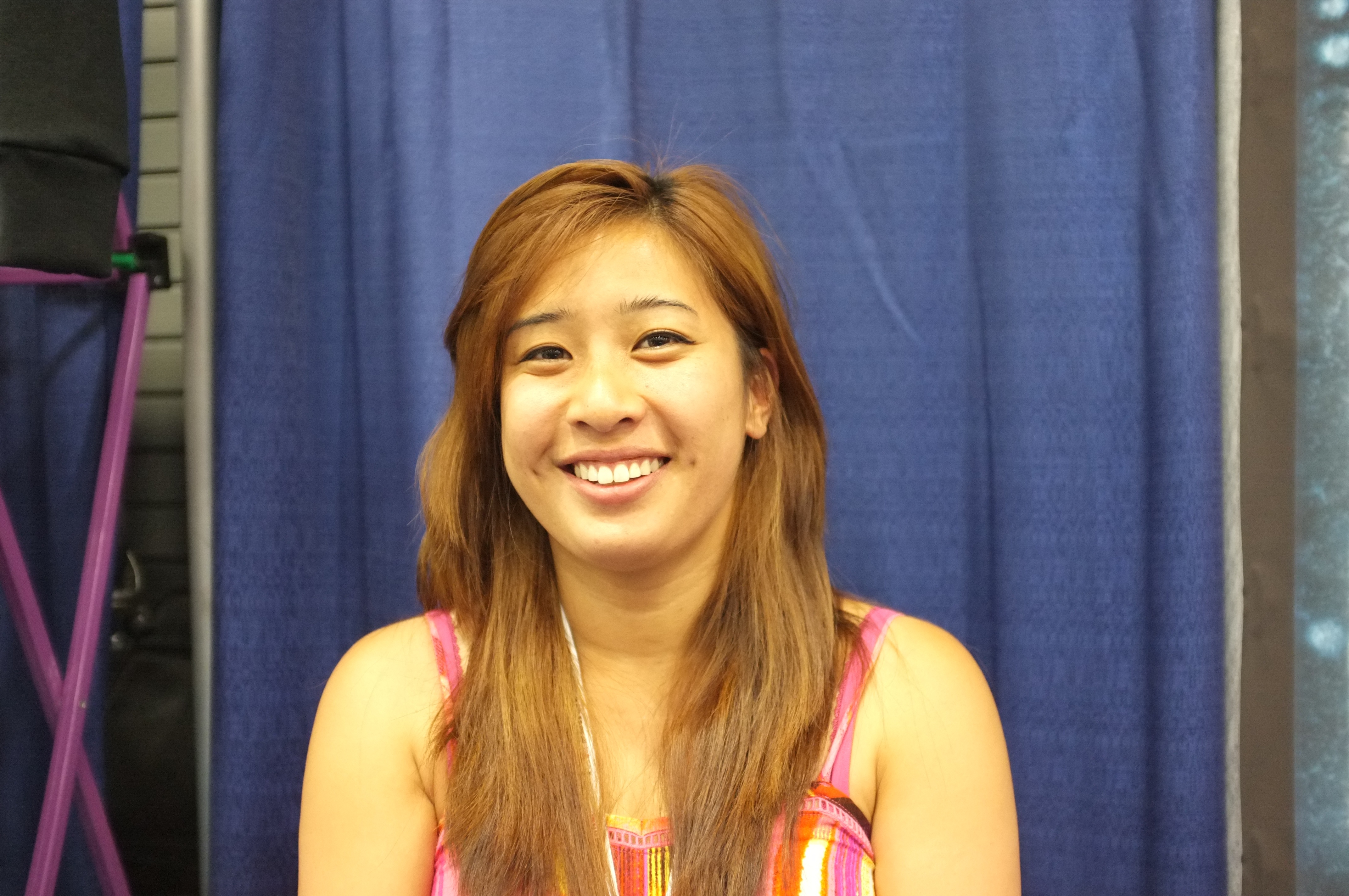 Today’s excerpt from my 2013 ebook Comic-Con Heroes: The Fans Who Make the Greatest Show on Earth is the last of the dozen profiles, which I started serializing Saturdays more than two months ago. One more installment remains, posting in a week, after which, on July 8, 2015, when my current commitment with Amazon KDP Select ends, the book releases into the public domain.

To recap: “Comic-Con Heroes” is a collection of profiles. Twelve attendees. The people whom I believe are the real stars of the show. Not Hollywood, which presence feels larger every year. As I write in the book’s opening section: “While many Conners role-play fictional characters or superheroes, fans of every ilk play the most important role of all. They are Comic-Con. But no one tells their stories. I want to change that”.

The other 11 profiles, in order of appearance: The Dark Knight, The Fighter, The Collectors, The Academic, The Nerd Culturist, The Writer,The Bicyclists, The Heroine, The Time Lord, The Volunteer, and The Vendor. The last, today’s profile, is a real geek fest, for those who love gadgets, sci-fi, artificial intelligence, or cognitive research.

With that introduction, let’s meet The Millennial.

As [Scott] Brown and I finish up, a young woman starts shopping his booth. She is a college student, and I ask for an interview. Her whole manner is Millennial generation digital native, right down to the Nokia 920 Windows Phone. She is a child of computing, connected and cell phone culture, the kind of attendee I presume drives the Con away from comics and who is more open to consuming entertainment many different ways.

PewResearchCenter describes Millennials as “confident, self-expressive, liberal, upbeat, and open to change”. People born after 1980 fall into this generation. One-quarter believe technology makes them “unique” compared to their forebears.

Millennial Monica Kong attends the Con for the third time and she is here for all four days. “My brother and I have been going to conventions for over 10 years, so going to Comic-Con was sort of graduating from smaller anime conventions that are frequent around Orange County and LA. We wanted to do it pretty big, and Comic-Con is big, right?”

Her brother is into “‘Magic’ cards” and she “likes sci-fi TV shows”. Kong describes Comic-Con as a “nerd paradise”. I interject: “Nerd paradise? I love that. No one has said that”. She laughs. So we discuss the topic and the recurring theme of attendees coming to a place where they can be themselves. Be accepted.

“Yeah, you really do feel that way, and nobody judges you. Even if they do, you don’t care, because everyone has the same mindset. We’re just here to enjoy ourselves, and we have these passions and we’re not ashamed of them”.

Kong’s sci-fi interests aren’t just a pastime—they are her life. She studies “cognitive science with an emphasis on human-computer interaction”. The field tries to “bridge the gap between human intelligence and artificial intelligence”.

Comic-Con is a classroom of sorts, a look into what future technology might be developed. Many of the devices Millennials use now were past sci-fi visions of the future. Andrew Elkins’ observation about “Star Trek” is astute. What the TV show envisioned about the future already is the present: communicator (cell phone); tricorder (smartphone); tablet (iPad); and computer voice interaction (Moto X), among others.

Kong planned to study psychology but the university offers a “cognitive science major, which sounded much more interesting because of its interdisciplinary approach”. Artificial intelligence fascinates her because “the tech world has progressed so rapidly in the last several years. Understanding the human mind and behavior and applying it to developments in AI, I guess you could say I want to be part of the fun, too”.

She holds up her Windows Phone. “The way we interact with machines is getting more and more seamless and easier”. She hopes the trend “doesn’t make us into a lazier society”. I interject: “Don’t you think we are, with Google search, a lazier society?” She agrees.

“I believe that these services are gradually becoming an extension of us”, Kong emphasizes. “Our devices have enabled us to connect with others and access information so readily that we become consciously aware when we find ourselves in a place with no connectivity”.

She describes a kind of dislocation of ourselves, but extension, too, in ways that a Millennial better grasps than someone from another generation. “It’s difficult to memorize and store as much information in our brains as our devices can retrieve for us, so I feel like they’re important for those kinds of tasks. That combined with the extension of ourselves through blogs, photos, and social networks makes our devices not just machines, but a place that contains a part of our essence as well”.

Voice interaction is top of my mind, as I see touchless control as the next big trend in computing. She agrees. “Right now we’ve got voice-command features like Siri, and that’s a start in regards to our devices becoming smarter and responding to senses other than touch, but I think it’d be much neater to have our devices respond to our thoughts. Once we’ve bridged that gap, then I’d say they’ll be truly indispensable”.

“I’m leaning towards ‘the world will be better’ outlook. Almost all bleak sci-fi scenarios are due to the inherent flaws of human nature, so it wouldn’t be the robots I’d be worried about, at least not for a very long time”.

Kong is fresh, expressive and free in ways that stand apart from everyone else I interviewed. She is a young woman comfortable with being Monica.

“You see lots of people, too”, she says, referring to actors, actresses, and artists. “That’s another thing I like. You can get up close and personal with them. It feels a lot more personable, that people in the industry can interact with their fans”.

I asked if she attended any panels. Kong tried but failed to get into “‘Once Upon a Time’. If I got in there 10- or 15-minutes earlier, but the hall filled up”, she says, giggling. “But I did go to the ‘Dexter’ panel”, the last since the series ends in 2013. “I hadn’t finished it, so there were lots of spoilers galore”.

Since she’s sci-fi, I share my frustration about not getting into the “Orphan Black” panel, which reached capacity 90 minutes before the doors opened. I’m surprised she isn’t familiar with the sizzling BBC America series, which clearly targets the Millennial audience.

We swap stories about missing out Con 2012’s “Fringe” panel. She, like me, “saw people walking around with Observer hats” and coveted. But Kong got in the previous year. “That was amazing, and probably the most star-studded I’ve ever felt”.

For 2013, most of her time is spent on the show floor, “because the panels are so hard to get into”. But she and her brother caught several midnight screenings: “‘Evil Dead 2013’, a remake of the 1980s version. It was so-o-o-o good. There were lots of hard-core fans in there”, which charged the atmosphere, with “people all freaking out at the same time”. They also watched “Shaun of the Dead”.

I can’t resist segueing to the idea I posed to Ken Camarillo, The Dark Knight: “Where’s the graphic novel where Batman becomes undead? He’s not like Superman, because he’s a real guy”.

“That’s true”, she agrees. What? A league of undead superheroes? “They’re combining superheroes together”. I interject: “Right, they’re all undead together”.

She remarks “that everyone is so obsessed with the undead thing”. I ask if she has seen movie “World War Z”. No. “Who’s in that?” she asks. Brad Pitt. “I haven’t kept up with ‘The Walking Dead’ as much as I should. My brother loves it”.

Because she is another person from the Los Angeles-area, I ask about Comic-Con relocating.

“I don’t care too much for the area that the LA Convention Center is situated in. It’s not close to a lot of food stuff, and there is traffic you have to deal with all the time”. Kong prefers San Diego. “But if it went to Anaheim, Orange County, for instance, which I don’t think is going to happen any time soon, that would be cool”. Still, she doesn’t mind driving to San Diego, “and the weather’s good”.